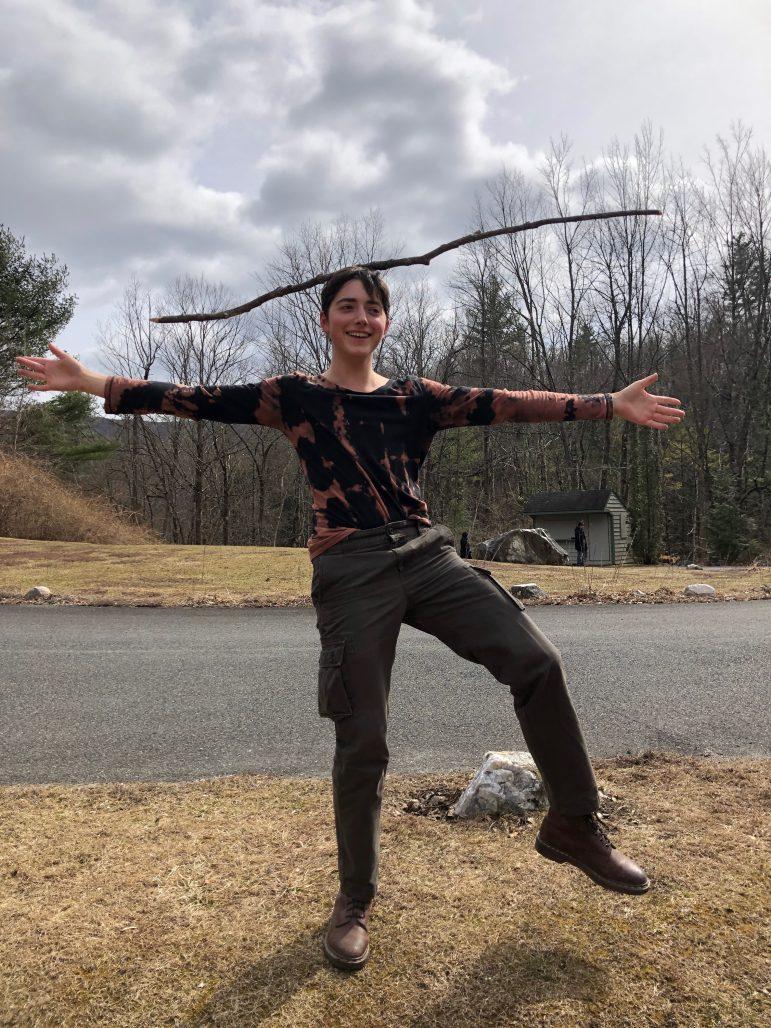 He flips the camera on his iPhone away from his face and focuses it on one of the many prints lining the walls of his room. Through pixels, I can just barely make out a body, so Wylie Thornquist ’20 fills in the blanks. We’re looking at a portion of Peter Bruegel’s Netherlandish Proverbs, a 1559 oil painting packed with depictions of Dutch-language idioms. Thornquist’s section shows a person in armor wearing only one shoe, holding a knife and forcing their head into a brick wall.

“This is kind of how I feel in quarantine,” he remarks, smiling.

While for most students at the College, the outbreak of COVID-19 and subsequent cancelation of the spring semester meant a move away from the Berkshires, Thornquist decided to remain in his off-campus house just two minutes from the Spencer Studio Art building. “I’m staying here because I really like my room here, and I’d like to spend more time with my friends while they’re here,” he said.

Thornquist also cited access to campus resources as a primary motivator behind staying in Williamstown. He is an art history and studio major in the process of creating a senior thesis, which he described as “a series of prints and paintings exploring the sixteenth- and seventeenth-century witch hunts in Europe and how they relate to the transition from feudalism to capitalism.”

“The thesis requires the use of some equipment that there’s absolutely no way I could get access to back at home,” he said. “The printing press, for example — that’s just a huge piece of machinery.”

Detail of “Miss Ribeiroia and the Faun,” posted on his Instagram (Photo courtesy of Wylie Thornquist.)

I first met Thornquist earlier this semester in “The Expressive Body,” taught by Assistant Professor of Theatre Shanti Pillai. But I had known who he was beforehand, having spent a totally normal and reasonable amount of time stalking his Instagram profile. In Thornquist’s words, the account is “really like a mix of weird photos that I take and also things that I think are beautiful, and then getting to share my work on there too is really fun.”

His Instagram might serve a particularly important role now that the senior art show is canceled. “With the thesis, it’s been hard to continue motivating it, knowing that there won’t be a senior art show,” he said. “I have thought a little bit about potentially going into self-publishing… I probably will post it on Instagram.”

It may seem peculiar to include such work on Instagram, but Thornquist’s profile looks more like an art exhibit than a social media account. Even the geometry of each individual post complements the others. A recent image of a rotten, hexagonal apple and its surrounding twigs recalls one of Thornquist’s own prints, posted a month earlier, with its muted color palette and lanky intricacy.

Rarely do people’s internet presences accurately convey their energy, especially a profile as curated as this one. But Thornquist’s just feels right. Online and in person, he is gentle, nuanced and understated.

There is a sense that although his presentation on Instagram (and in person, for that matter) is well thought-out — calculated even — none of it is insincere. He just likes what he likes. When I asked him why he feels he is drawn to certain kinds of art, he paused before answering.

“So much of it has less to do with the type of art and more to do with the content,” he said. “I particularly like works of art which try to tell a story.”

This simplicity behind Thornquist’s artistic interests, though, hardly make them less meaningful. When he traces the history of his practice, he explained that in high school and as an underclassman, he created a lot of self-portraits as an exploration of “a kind of self-fashioning or a self-imagination, which can be really fun and empowering — imagining a version of yourself.”

As he has grown, though, Thornquist has turned to take inspiration from more external sources.

His connection to his thesis — which he describes as “more specifically about reproductive controls of women, the ways that the shift from a feudal economy to a more industrialized European economy was felt by women, and also what early colonization and discovery of the New World meant for domestic European populations at that time” — is in some ways quite personal.

“I have my own complicated relationship to reproductive rights and what it means to be a trans person who is kind of forgoing certain reproductive avenues in order to live the way I want to live,” he said.

But he refuses to solely entertain the topics insofar as they apply to him. Instead, he now grounds his work not in self, but in history.

“It’s actually been a lot more interesting to explore what reproductive control over women in early modern Europe looks like and how that resonates with current day abortion restrictions,” he said. “With this work that I’m doing now, it feels like it’s a lot more of a gaze outward into the world rather than a gaze inward to how that world impacts me personally.”

Our FaceTime conversation ended with a brief virtual tour of Thornquist’s quarantine quarters. His room is as beautiful as you would imagine, decorated with handmade quilts, small sculptures and other “comfort crafts” he has been working on over the last few weeks to cope with these uncertain times.

As we said goodbye, I couldn’t help but see this physical space as another embodiment of Thornquist himself, proving not only that he has grown to take in the world around him, but that this outside world has enjoyed absorbing parts of him, too. Both are better for it.