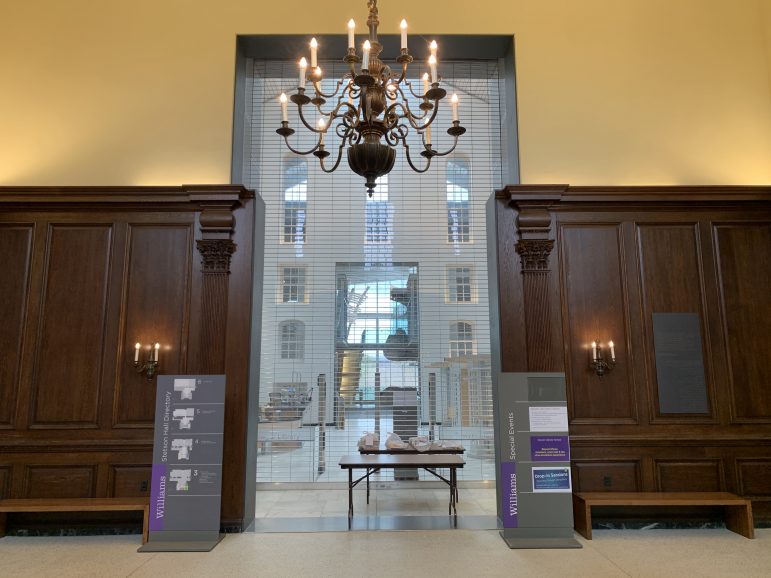 The libraries have ceased the majority of their in-person activity, including the services that had allowed users to request books for pickup. (Kevin Zhang Yang/The Williams Record)

Baker’s
order, issued amid concerns of the spread of COVID-19, will last until at least
April 7, the day after online classes begin at the College. Previously,
librarians had been retrieving, scanning and sending book chapters and
articles, as well as retrieving and bagging books for library users who
remained in the area to pick up.

“We will review this decision ahead of April 7th (ending date
of the Governor’s order) to decide how to best support the second half of the
spring semester,” reads the announcement on Daily Messages.

Although
the order officially went into effect at noon on March 24, the libraries halted
in-person operations only at 2 p.m. on Thursday, March 26. Director of
Libraries Jonathan Miller wrote in an email to the Record that the extra
two days were designed to give “users enough
time to digest the news and request what they needed.” When the library first
closed its physical space to users to allow only for scanning and pickup
services, he heard from faculty members that they had not had enough time to
prepare for the change. He pointed to the hundreds of requests in the last two
days of operations as evidence that the extension was necessary.

“Clearly some users felt significant need and used the time
to place a considerable number of requests,” Miller wrote. “We also heard no
complaints about the change in service, so I think we found the right
balance.”

On
Thursday, six librarians came into Sawyer Library for one last push to
fill requests for books and articles.

“We
filled nearly 300 requests for physical items to be pulled, checked, bagged and
put out front in the lobby for people to pick up at their leisure,” said Nadine
Nance, head of access services. “And we scanned the last of the scanning
options in order to allow people to have access to chapters and articles. I
think we scanned about 11 individual requests, but into the hundreds, maybe
even thousands, of pages.”

A few library staff members will continue limited on-campus work. Upon request, Nance will procure the library’s audiovisual equipment for faculty, who may wish to borrow the equipment for online classes. Librarians’ other in-person activity, according to Miller, is picking up mail from the Paresky Center twice a week.

“You
would be amazed how much paper we still get,” Miller told the Record.

Even
before the cessation of in-person activities, librarians had been working on
improving online resources.

“Behind
the scenes, the staff who continually build the collection had begun
transitioning to acquisitions based on digital rather than print resources,”
Miller wrote.

Library
users can access online resources through the online
catalog or the library’s
databases. Librarians are still available remotely as part of the
previously existing Ask
a Librarian service to help students and faculty with research
and teaching.

Professor
of Political Science Nicole Mellow said she has worked with Hale
Polebaum-Freeman, reference and first-year outreach librarian, to prepare for
her classes moving online. Her class, How Change Happens in American Politics,
which requires a research paper, met with Polebaum-Freeman during the last week
of in-person classes.

“Knowing that we would all be working remotely, Hale
helpfully put together an easy to use research guide that compiled many of the
library’s relevant online resources,” she wrote via email. Mellow and Polebaum-Freeman reoriented the planned research session to focus more
on accessing online resources.

“It helps, too, that, in general, the topics the students are
researching for this class are well covered by journal articles, making the
research project possible despite limited access to books,” Mellow added.

Polebaum-Freeman noted that they also discussed with the class the
many aspects of research that will not change.

“The mechanics of research, things like distilling keywords
from a research question, thinking critically, understanding how to craft a
research strategy, do not change in response to where the research is
happening,” they wrote in an email to the Record.

Research in Special Collections — the Chapin Library and the
College Archives — may look very different, however. Lisa
Conathan, head of Special Collections, wrote in an email to the Record that
her department has been “so creative about adapting.”

“With the pivot to remote classes, we have helped faculty who otherwise would have used our rare books and archives, to instead find alternative projects using existing digital resources such as Unbound, the Digital Public Library of America, and the Internet Archive,” she wrote. “We also spent part of our last days on campus snapping photos of rare materials so staff could catalog them remotely.”

Nance stressed that despite all of the changes to library services, librarians are still available online to help with research.

“We just need to remember that they are there to help support
the community,” she said. “And I think they’re ready to rise to the occasion.”