In response to the Record Piece, “Our Time: A production that refuses to grapple with identity” 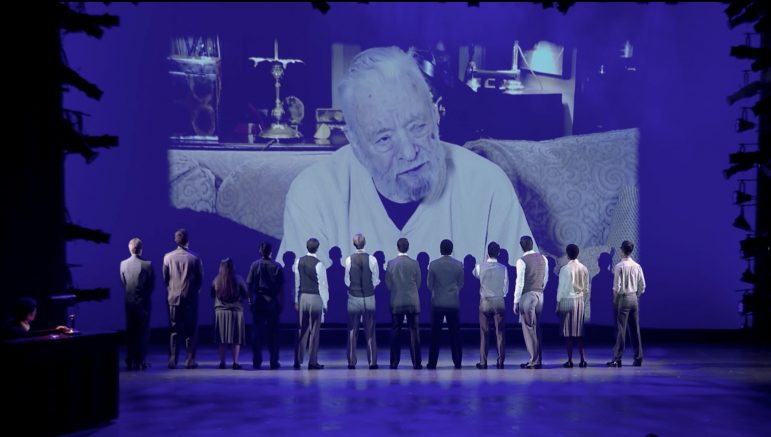 The cast of Our Time turns to watch Sondheim’s video appearance. (Photo courtesy of Keith Forman.)

In her review for the Record, staff writer Lily Goldberg ’22 argues that the recent original production Our Time failed to provide critical perspective on the archival material from which the play’s scenes are crafted and inadequately explored the determinative role that Stephen Sondheim’s identity as “gay and Jewish” played in his experience at Williams. In any creative project informed by history, the reliability of source material is essential to the work’s integrity, and this is certainly true in the case of Our Time, where the source material formed the script itself. For this reason, questions that seek to clarify a work’s sources—point out areas of inconsistency, inaccuracy or insensitivity in the conduction of historical research should be welcomed by artists. So long as they comprehend the impetus behind the project at hand and refrain from projecting their own agenda, these questions enrich the work.

Unfortunately, Ms. Goldberg’s article falls short on both counts. Our intention in writing this letter is not to scold or chastise or even defend this production from criticism. Rather, we want to set the record straight about our intentions and method, and assert our sense of how elements of someone’s identity should not be the primary focus of a production such as ours.

The first lines of Ms. Goldberg’s article suggest that, because Stephen Sondheim was gay and Jewish, the program of events in the [email protected] festival should hold these features of his identity as critically important. We would argue that for readers who turn to the arts section expecting a theatre review, it might be more pertinent to mention the Grammys, Oscar and Tonys that he has won.

Ms. Goldberg’s presumptions about how theater should work woefully overlook and misunderstand the essence of the effort and intent behind this specific play. Over the course of Winter Study, the actors worked with visiting lecturer Ilya Khodosh ’08 in a project of combing through Williams’ archives to find moments in history that were resonant and compelling to the team. The actors wove together past narratives in all forms to create a story. Our project was to understand the Williams of Mr. Sondheim’s years, but to also learn about Williams as an organism itself. Our Time was not developed to provide a simple or straightforward critical perspective on Williams’ institutional history. To do so would have been to suggest an authority we cannot claim. Rather than telling you how racist, anti-Semitic, sexist and homophobic the past was, Our Time sought to portray a series of moments that allow the audience to come into contact with our collective history. By doing this, we gave the audience the ingredients for critical perspective, without spoon-feeding or packaging that perspective for them.

In the 1950s, when Our Time is set, a prevailing agenda of bias made it acceptable for people to draw attention to others’ identities by means of spotlighting, “outing” and name calling. This was a time when identities that deviated from the normative social spectrum were considered ugly and shameful. Looking back, with the benefit of hindsight, one understands the perspective lost when we determine a person’s value based on isolated traits, rather than richly considering their life of accomplishments.

Regrettably, Ms. Goldberg’s article disrespects the method and intent of our production, choosing instead to valorize an identity-centric mode of attention. A filmed version of Our Time is available online. We hope you’ll check it out for yourself.

Tristan Whalen ’22, who is from Amherst, Mass., acted in and served as assistant stage manager for Our Time. Omar Sangare, professor of theatre, directed Our Time.