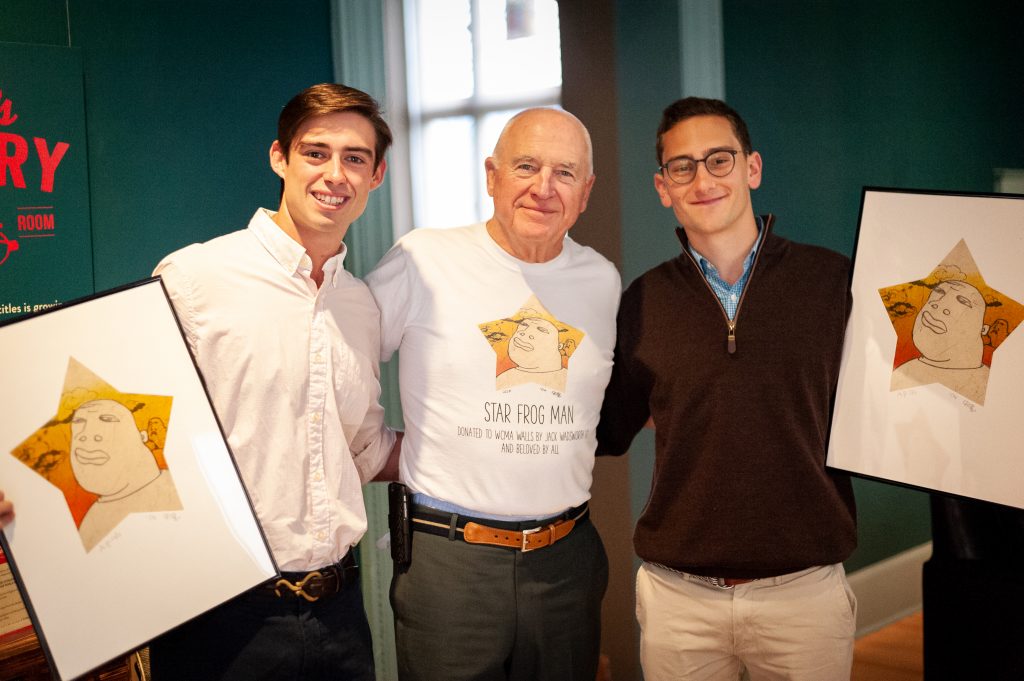 Out of the 123 original artworks loaned to students by the Williams College Museum of Art (WCMA) for their Williams Art Loan for Living Spaces (WALLS) initiative, Zhu Wei’s New Pictures of the Strikingly Bizarre #9 was the first work to go this year: claimed by Zach Babat ’21, who camped out overnight beginning the afternoon of Saturday, Sept. 8.

Wei’s biggest fans, however, would have to be Richard “Cros” Saint ’19 and Andrew Wallace ’19, who met the piece not long after they met each other. Saint and Wallace, who were roommates in their first year and continue to live in the same house in their senior year, chose this work during their first semester at the College. Some may recall their first moment of fame in the Record when they were featured in a photo box on the front page getting this exact piece. Throughout the past four semesters, excluding their study abroad ventures in St. Petersburg and Paris (respectively), the duo braved the interminable WALLS lines again and again just to borrow Wei’s piece, which they came to think of as a “pet,” or their “third roommate – the cleanest roommate we’ve ever had!” as they described it.

This journey seemed to come full circle when Jack Wadsworth ’61, donor of the artwork, in fact gifted two original prints of the piece to Saint and Wallace – to keep! – on Sunday, Sept. 9. “We were astonished and emotional to learn that we would be receiving prints of our own,” recalled Wallace. “We could never have anticipated getting to own copies of the piece of art with which we fell in love as freshmen. Now seniors, we dreaded leaving our painting as we dreaded leaving Williams next year – now, we get to take with us the former, and with it a piece of the latter.”

Mr. and Mrs. Wadsworth’s generosity extends far beyond this event; in fact, Wadsworth has purchased eight additional original works by Wei from his series Pictures of the Strikingly Bizarre, which he is gifting to past student borrowers of Wei’s works who have shared special connections with the artworks in their WALLS notebooks – namely Abby Brustad ’19, Mikhayla Armstrong ’19 and three other alums.

As any student who has participated in WALLS will know, a small notebook is given to each student with their respective artwork, the idea being that each borrower will add a small message, creating a collection of personal anecdotes throughout the years. The notebook for New Pictures of the Strikingly Bizarre #9 in particular tells a multi-year saga of a growing friendship between two boys and their “Star Frog Man,” as they came to call the piece. The journey is a heartfelt one – beginning with first impressions (they were drawn to “the sad, maybe inquisitive look on the Star Frog Man’s face, and the face of his friend in the background” said Wallace) to the work becoming a sort of “calming and reassuring” presence in the duo’s lives.

“Star Frog Man” took on another form back in May of 2017 when Saint and Wallace created t-shirts with the artwork featured on them, gifting one to Wadsworth himself. Underneath the image, the shirts read: “Star Frog Man / Donated to WCMA WALLS by Jack Wadsworth ’61 and beloved by all.” Beyond Wei’s pieces, Wadsworth has in fact donated 10 works to the WALLS collection, including intricate Japanese woodcuts by Kitagawa Utamaro and Torii Kiyonaga.

Wei, however, would have to be the most provocative artist of Wadsworth’s collection. As one of China’s most notable contemporary artists of the post-Tiananmen period, Wei is also known for his critique of politics and society in a rapidly evolving China. As renowned Chinese art historian and critic Lu Hong points out, “The wisdom of Zhu Wei’s works lies in showing us that when one is pursuing a contemporary expression, the most important thing is to retain the means of a traditional rendition, to produce innovative results. It is especially crucial to retain a point of uniqueness in one’s artistic output in this time, when the development of contemporary art is under the threat of homogenization.”

Indeed, Wadsworth’s admiration for Wei’s work was made obvious during the giving-over ceremony of the artworks that Sunday, where he stressed not only the importance of protest artists like Wei, but also of programs like WALLS that facilitate relationships between students and the artworks themselves. “The work they [Mr. & Mrs. Wadsworth] have done with the museum has clearly been successful in allowing more students to actively engage with pieces of art, and allowing art to filter into their daily lives,” added Wallace.

And perhaps the most memorable moment of all was when Wadsworth ripped open his shirt à la Clark Kent to reveal none other than his “Star Frog Man” shirt.