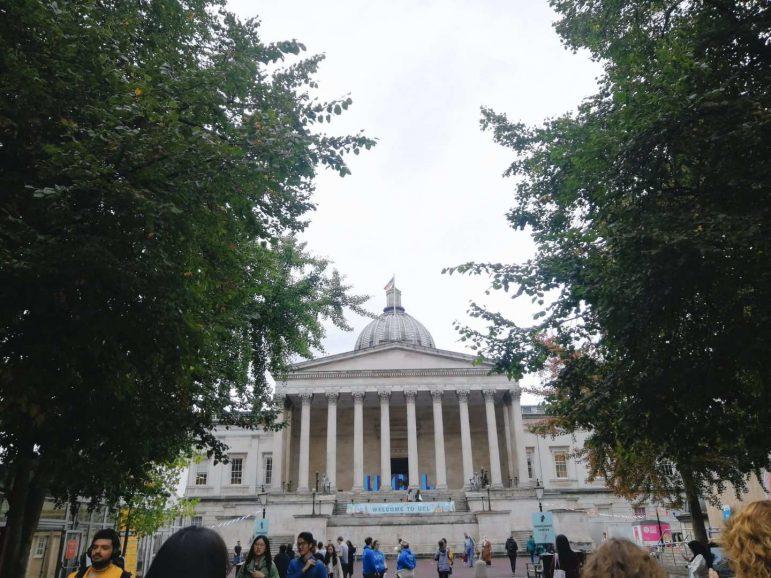 Haeon Yoon ’21, who was studying at the University College London (pictured) through IFSA, said her program told her to “keep calm and carry on” as it sent her home, offering her little support. (Photo courtesy of Wikimedia Commons.)

Update on Tuesday, March 17: “We’re going to tell everyone to return home if they can, whether they’re in Europe or elsewhere,” Director of Communications Jim Reische told the Record. All of the students returning from Oxford to the U.S. were able to fly out before Monday night, according to Lucie Schmidt, director of the Williams-Exeter Programme in Oxford.

A day after announcing the end of in-person classes in light of the coronavirus pandemic, the College cancelled the Williams-Exeter Programme in Oxford (WEPO) for the spring on Thursday and urged students studying in Europe to return home. Most programs in Europe have told students to head home, and the College’s senior staff is  assessing courses of action regarding programs outside of Europe.

The College’s decisions follow President Donald Trump’s announcement of restrictions on travel from Europe and the designation of most European countries as “Level 3, Avoid Nonessential Travel” by the Centers for Disease Control and Prevention.

“As a result of these recent developments, we strongly recommend that you depart from your program and return to your homes as soon as possible,” wrote Director of International Education and Study Away Tina Stoiciu in her email to students studying in European countries affected by the ban.

The 26 students in WEPO received an email on Thursday from Professor of Economics and Director of WEPO Lucie Schmidt, who told them to leave Oxford by Wednesday, March 18. The College plans for the students to complete their final tutorials virtually.

The travel restrictions, announced on Wednesday, bar non-U.S. citizens in most European countries from entering the U.S. At first, the ban did not apply to the U.K. and Ireland, but on Saturday, the ban was extended to those two countries.

Many study away programs in Europe had been transitioning to online learning before Trump announced the travel restrictions, according to Stoiciu, but most decided soon after Trump announced the ban that the students should leave Europe and finish their classes online.

“Most programs are working with students to help complete coursework remotely,” Stociu wrote to the Record. “For those who cannot, we will work with students and their programs to supplement any potential credit loss with online learning or summer coursework. Academic continuity, as well as student health and safety, is our top priority.”

She noted that the College will cover the costs of flights home for students who receive financial aid.

Sameer Khanbai ’21, who was studying in Paris at Hamilton in France, learned on Thursday that his program was cancelled. He said both the College and Hamilton reached out quickly after the cancellation to discuss refunds, online classes and other logistics.

“They’re still finding a way for us to make up credits (since everything happened so quickly) but it’s most likely going to be through the form of online classes,” he wrote to the Record. He said he is “a bit worried” about getting credits for this semester, since he had not even reached the halfway point of his program.

“Mostly, however, I’m sad that I lost my abroad experience,” he wrote. “I began making friends and getting better at French and now it seems like a lot of that has gone to waste which is unfortunate. But … I’m dealing with it because I know everyone is going through the same thing and we’re all in it together.”

Sarah Creighton ’21, a WEPO student, flew home today. “There was a bit of a panic right after we all got the email, because flights from London to the U.S. are in really high demand right now due to the travel ban, but I think most of us have been able to get tickets or adjust flights,” she wrote in an email to the Record.

The students at WEPO were “devastated” by the news, she said. She emphasized, however, that both Schmidt and Keri Williams, the program administrator, have been “extremely helpful.”

“This is and has been a highly stressful situation for all of us here, but I think that Lucie’s presence and availability has made it much less scary than it otherwise might have been,” Creighton wrote.

“I’m incredibly grateful to have gotten to spend the two terms here that we did, but it’s really disappointing to have to cut it short, especially with how quick the turnaround was,” she added.

While Creighton and other WEPO students have praised Schmidt for her handling of coronavirus concerns, other study abroad students have had to navigate the recent events with little support from their non-College affiliated programs.

Beau David ’21, who was studying at CIEE in Barcelona, learned on Thursday that his program was cancelled. In an email to the Record, he wrote that both the College and his abroad program should have taken steps sooner to address the pandemic’s impact on students studying abroad.

“Our program could have been more proactive in their approach to concluding the program this way,” he wrote. “We also feel that Williams should have seen what happened in Italy and began more formal procedures to pull students out of Europe given the ease of travel between Italy and Spain, France, Germany, etc. and likelihood of mass infections.”

He will complete the remainder of his classes online. Even before Trump’s address, he and his roommates had bought plane tickets back to the U.S., and he said they had been steeling themselves for an end to the program since the coronavirus began spreading quickly in Spain about two weeks ago.

“I, and I think I speak for my roommates who are also Williams students, are disappointed that our abroad experience had to end this way,” David wrote. “I will certainly look back fondly on being in Spain with my best friends from Williams but will lament the cultural experiences I missed out on having the program cut short.”

Haeon Yoon ’21 was studying at University College London through IFSA until IFSA announced that it will be closing its programs effective March 15. In an email sent to participating students Thursday, IFSA wrote that students were responsible for arranging and verifying remote class arrangements with their host institutions.

Yoon said she was dissatisfied with IFSA’s lack of communication and support for students. She first heard of the cancellation because her parents received an email from IFSA — hours before the program emailed her.

“I am upset and angry because they didn’t communicate anything to us throughout the entire day even though we did reach out to them [with concerns],” Yoon said. “The director also used the phrasing [in the announcement email], ‘I encourage all to adopt the British mantra to keep calm and carry on as you make preparations over the coming days,’ but how are we supposed to ‘keep calm and carry on’ and leave and figure out credits in the first place?”

Yoon said the program failed to provide sufficient support — it cancelled her health insurance plan and did not help her with travel arrangements. An international student from South Korea, a country with one of the largest coronavirus outbreaks, Yoon said she is worried about returning home and staying safe while getting there.

“The ultimatum aspect of having to leave — because otherwise we won’t have health insurance — is what bothers me the most,” Yoon said. “I feel like the onus is very much on me.… Being expected to figure out a way to go back to Korea so last minute without any financial or informational support makes me regret enrolling in a program that was supposed to make my experience here easier.”

Yoon said that the College, unlike IFSA, helped her navigate the sudden announcement.

“I’m grateful for the study away team at Williams for their support, however, who offered to WhatsApp call me and talk with me about my plans,” she said.

Jim Reische, the College’s chief communications officer, said that senior administrative staff is meeting regularly with Stoiciu and the Study Away office to determine next steps for programs not located in Europe.

This article has been updated to include additional student perspectives.