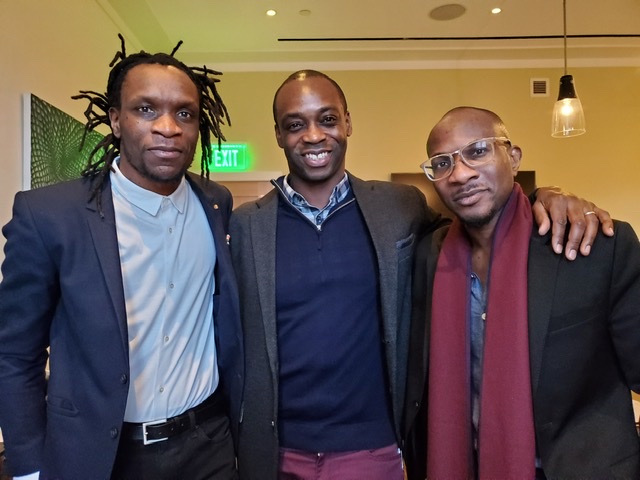 Phillips, Cole and Hutchinson are professors, poets and close friends.

“When we first heard each other’s work, there was a real, instant connection,” Phillips said. “I think you could hear at the event how there’s so much synergy between our work and how easily we talk, and it’s really always been like that.”

This was only their second formal event together, after a talk about their artistic influences at the 2018 Key West Literary Seminar.

Phillips said he is drawn to poetry’s ability to engage with themes of democracy, which he explores in his personal writing and in his course, Democratic Vistas, in which students read work by authors such as Jamaica Kincaid and Toni Morrison.   [Both writers of this article are students in this course.] He is the author of three poetry collections, the most recent of which, Living Weapon, came out last month.

Phillips discussed the study of democracy and the ways in which art can be a disruptive act of resistance and an important part of being a democratic citizen.

“I think that democratic praxis appears in our work simply from the idea of being free, and it’s really something not to take for granted,” he said. “We are free beings, but we often feel trapped or limited by our surroundings. I think that the different concentric circles of all the places you belong to inform the way that you think about yourself as a democratic being and your sense of democratic responsibilities.”

For example, Cole is from Lagos, Nigeria, and Hutchinson is from Port Antonio, Jamaica. In both Cole’s photography and Hutchinson’s poetry, one can feel the tension between travelling in an unfamiliar land and carrying your home with you.

“So when you think about Teju, there are these concentric circles, there’s the citizen of Lagos, which will be a city kid, there’s the citizen of Nigeria of the African continent, but then there’s also the Harvard University professor, this global iconic citizen,” Phillips said. “The same thing with Ishion. Ishion is not from Kingston [the capital city of Jamaica]. Most of the time you would imagine Kingston, but he’s from Port Antonio, definitely not a city kid.” Phillips himself was born and raised in New York, but his family is from the Caribbean island of Antigua. As with Cole and Hutchinson, much of Phillips’s writing addresses the various places he calls home.

In addition to poetry’s ability to cover democratic themes, the talk also covered the interdisciplinary nature of poetry as an art form.

“I love the fact that genres kind of criss cross, paradoxically,” Phillips said. “Teju is quick to say, ‘Oh, I’m not a poet,’ but it’s hard to not find poetry in his work.” He refers to Cole’s book, Blind Spot, a collection of more than 150 full-color original photos, each accompanied by a brief piece of writing.

“And similarly, Ishion is not a visual artist, but then all the work so filled with description and this kind of like deep love for visual phenomena,” Phillips added. One of the poems Hutchinson read at the event, “The Ark by ‘Scratch,’” from his collection House of Lords and Commons,  was written in reference to Reggae legend Lee “Scratch” Perry, whom Hutchinson said is his favorite person on the planet.

Phillips noted the difference between a poem as a spoken piece and when it is solely on the page, and explained how a space comes alive when filled with the voice of the poet. When Hutchinson performed his poem for the small class, his voice was softer and did not reach the same booming quality that it did in the ’62 Center. He emphasized different sections of the poem using varying rhythms and cadences during the two readings.

On inspirations from music and visual art, Phillip said that “part of the artist’s journey is learning how to translate those things that excite them in one medium or phenomenon into what is the heart of their craft.” He named Dante and Audre Lorde as two of his greatest artistic inspirations, noting that Dante in particular keeps him going consistently.

This interconnectedness of art across mediums is seen in the title of the event, “Silent Poems, Talking Pictures, and the Infinite Playlist,” which is a reference to Simonides of Ceos, the ancient Greek poet who famously wrote, “A painting is a silent poem, and a poem is a speaking picture.”

“Poetry in and of itself is always an art of belatedness,” Phillips said. “Something happens, then there’s a poem — the poem never comes first. And that’s what I think makes it so susceptible to absorbing whether it’s dance, music, visual arts. Poetry in particular constantly reminds you to create other stuff.”