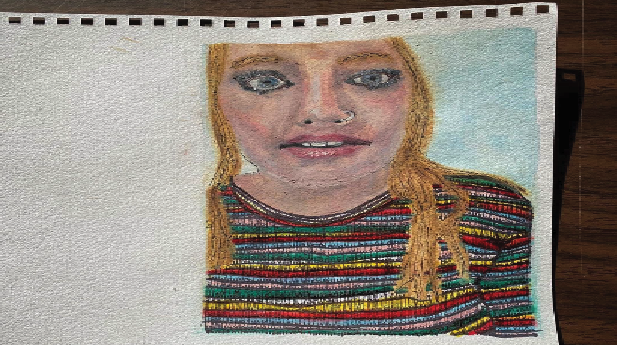 Ginya Marr explores her passion for art through the department, allowing her to develop new skills. Kimberlean Donis/The Williams Record

Ginya Marr ’21 found her passion for art with the help of the divisional requirement. During her freshman fall, she enrolled in just one introductory arts course, Drawing 1. Marr, now a studio art and comparative literature double major and an Armstrong-Pratt JA, discovered that she could never have a semester without an art class.

Marr came to the College with no formal artistic experience. She had never taken an art course before, but she always found herself to be creatively minded, with a deep love for reading and watercolor. She said she considers creativity to be an important value in life, both to her mental health and the cultivation of her pursuit of being a well-rounded student.

She attributed her deep seated passion for the studio to Introduction to Etching with Nicole Maloof, visiting assistant professor in art. “It was the class that by far has taken up the most space in my life,” Marr said. “I was in [the studio] every day for upwards of four hours at least. It was really cool and empowering to learn a whole new technical skill, and the use of copper plates made me feel important.”

As a junior, Marr still has a whole year left to consider her future beyond the College. With a passion for refugee work, she is working to discover more about the intersections between art and therapy and how art can be used as a means of processing trauma.

“One of the things that’s awesome about art is how it has taught me how to have a concept and figure out how to curate that concept into something tangible,” she said. “But then also create for the right audience and get the right meaning across.” She stressed the importance of beautification within refugee camps — people don’t realize how much it matters to have space around you that has been loved and delivers good energy, she said.

She also continues to be interested in teaching elementary school and making art a priority in education systems. She sees herself finding a future in teaching, refugee migration or, if she’s lucky, both. With hopes of working in an NGO in either Greece or South America next year, Marr even hopes to teach English as a foreign language.

Art can be a large time and skill commitment that often goes unrecognized. For Marr, being an artist is not the end goal; it is the skills that art provides her that matters most. The cultivation and value of artistic thinking is often undersold in society, according to Marr. “I find that departments in other divisions focus more on dissecting and analyzing, but sometimes creating from the start and defending that very creation is often more challenging,” she said.

Marr said that the Purple Bubble understands the intense commitment of art better than the world outside Williamstown. “People here are pretty good about understanding how art is not a joke and it is a really big time commitment,” she said. “It is especially awesome that the book grant transfers over into art, making the department itself pretty accessible. Which is basically untrue of every other school I know.” Spencer Building is open around the clock, and there is always someone roaming the halls in search of artistic stimulation.

As her third Big Spencer Art Show looms around the corner, Marr remains unsure of where her artistic drive will lead her. She is considering curating an embroidery project. Based off of previous experience in Material Issues, taught by Professor of Art Pallavi Sen, she has grown to love the time and intricacy put into creating beautiful embroidery. But as she is currently enrolled in Introduction to Oil Painting lead by Professor of Art Laylah Ali, she is also considering creating a large-scale oil painting.

“I am really enjoying painting so far,” Marr said. “I am not sure what the themes will be. Historically I have done a lot of art pieces connecting poetry, writing or text that is important to me and translating that into art. Or maybe even a political piece dealing with refugee migration. I guess we will see!”

This article is the latest in a series of profiles on studio art majors.