Our Time: A production that refuses to grapple with identity 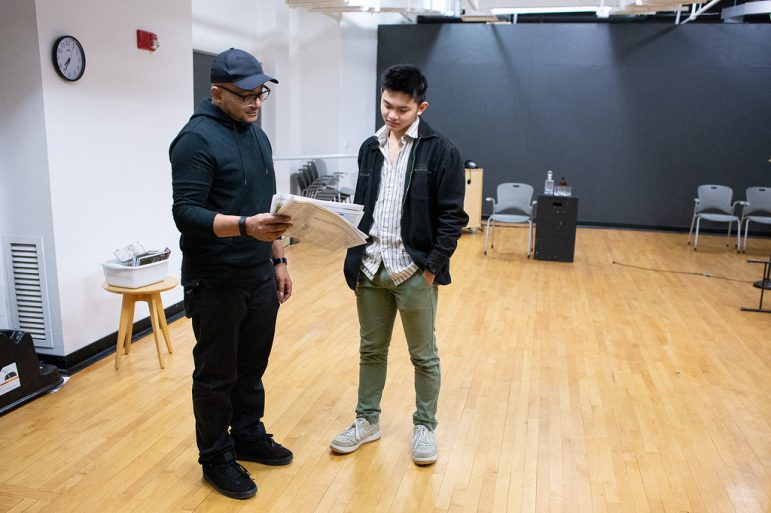 Our Time dramatizes College’s past without conversation on identity, but shines in specific moments. (Photo courtesy of Brad Wakoff.)

Stephen Sondheim is gay and Jewish.

You could likely make it out of both theatrical productions presented in the ’62 Center for Theatre and Dance this weekend for the Sondheim @90 Festival without realizing this. Not that one might have expected Cap & Bells to address Sondheim’s religious or sexual identity in their enjoyable if predictable production of A Little Night Music, Sondheim’s 1973 musical about lovers summering in 1900s Sweden. But in Our Time, a play devised by Professor of Theatre Omar Sangare and Visiting Lecturer in Theatre Ilya Khodosh ’08 that explores the College during Sondheim’s time here through a series of vignettes and monologues, it’s notable that Jewishness comes up only once, and not in direct reference to Sondheim. Queerness is mentioned not a single time.

To be fair, Our Time is not about Sondheim. It is feasibly about “how Williams became itself,” but practically about the perils of stretching a 29-page script over an 85-minute runtime. The monologues hop around from excited fraternity brothers planning spring break festivities to experiences of racism in Williamstown, without much tonal transition besides prolonged and liberal piano underscoring provided by Coleston Smith ’22, who plays Sondheim. Perhaps the awareness of Our Time’s lack of throughline is what prompts Smith to defend Sangare and Khodosh’s theatrical mode in the very last lines of the play: “We are, inescapably, sharers of time,” says Smith-as-Sondheim. “That’s the thread, and it’s enough.”

More conceptually, however, Our Time is a play about the archive. In developing the play, a process that began with a Winter Study class, Sangare and Khodosh asked the company to comb through old copies of the Record for material that inspired them, and to craft characters and scenes from the stories they found.

I’m coming clean: I’m a massive nerd for that kind of stuff. I look through old copies of the Record and the Gulielmensian, digitized on the College Library website, in my free time. It was through reading old Record articles that I stumbled on a front page promotional article for a minstrel show to be held in the Adams Memorial Theatre on March 13, 1942. And by looking at the Gulielmensian from 1946 to 1950 (the years of interest in Our Time), I confirmed my suspicion that every member of the Record in those years, at least the ones photographed in the yearbook, was white. By asking students to scavenge material from the Record, Khodosh and Sangare’s production relies upon white male storytelling from the beginning.

Which is fine, if the outcome of the production is truly — as it states in the program note — to reckon with white male hegemony in the College’s history. Artists can draw and have drawn upon predominantly white archives to generate works of theater that engage seriously with issues of race and gender. Hamilton, Lin-Manuel Miranda’s blockbuster musical which casts actors of color as America’s racist founding fathers, does this by reclaiming Alexander Hamilton’s story as one of immigration. (This strategy has, however, raised enough eyebrows with historians and critics who believe Miranda’s hip-hop score and diverse cast actually downplay the trauma enacted by the founding fathers.) And in Suzan-Lori Parks’ fascinating and absurd work The America Play, a black Abraham Lincoln impersonator reckons with historical accuracy in his line of work as the play explores written archives, historical quotations and oral histories. In both Park’s and Miranda’s works, actors can reckon with the white archive because their embodiment of this history clashes visually with it. To put it another way, the tension created by a black actor playing a racist historical figure — a tension explored in both Hamilton and The America Play — allows audiences to consider the portrayed historical figures in a different way. All-women productions of Shakespeare plays practice the same subversion.

Of course, besides subverting archival history, theater can also extract and invent stories from subtext, like feminist retellings often do.  Six The Musical, a retelling of the lives of Henry VIII’s six wives, is doing this on Broadway right now.

The issue with Our Time is that it does neither — rather than reckoning with history, it merely presents it, and asks that audiences suspend their disbelief that presentation and reckoning are the same thing.

There are long scenes dedicated to presenting portraits of fraternity life (including a scene in which Peter Tamasi ’21, in a believable performance, injects some much-needed energy into the play by describing all the girls who are coming on Spring Break with the fraternity brothers).There is only a very short monologue spoken by an alumnus (played by Alexander Szrol ’21) to represent a white character who “could not partake” in fraternity life. Why? Was he Catholic? Not monied enough? Jewish? The tendency of most monologues in Our Time to be generic meant that, although one could sense that fraternities were exclusionary, an audience member never got to hear about the feelings and histories of those excluded. In the one short scene where women appear as characters, Ivana Mensah-Agyekum ’23 and Andrea Selena Treviño ’20 play characters called “Wife” and “Depressed/Existential Wife,” respectively. “Wife” spends most of her monologue discussing the furniture in her room.

When the play gets specific, however, it shines. One scene revolving around the experience of black student Wayman G. Caliman Jr. ’48 with racist price discrimination at a local barbershop made me think of the challenges still faced by students and faculty of color living in predominantly white Williamstown today, a parallel I’m sure was intentional. I only wish that Chinonso Anokwute ’20.5 could have the chance to play a more specific and lived-in Caliman, rather than sitting in silence onstage portraying “Victim of Barber Shop Racism,” as the role is described in Our Time’s written script.

Another specific scenario was that of Josiah Horton ’48, a student questioned by the House Un-American Activities Committee for his Communist beliefs. Will Titus ’23, who played Horton, captivated with his monologue, but without any guidance as to how Horton’s story related to the other themes, Titus’ performance was ultimately unsupported by the rest of the play.

The final few minutes show a filmed interview that Sangare and Khodosh conducted with Sondheim in his home about his experience at the College and his artistry. The play concludes with the cast looking up in veneration at Sondheim. It’s a beautiful bit of staging, but entirely unearned. The pivot towards making Sondheim central at the close of the play is bizarre. Sondheim as a character in the play has only one short monologue, about an opera he has seen, and has simply been plunking on the piano in the left corner of the stage throughout most of the show.

Sondheim’s physical separation within the show also implies that his artistic genius rose above rather than evolved from the culture of the College in the 1950s. However, although it was never mentioned in Our Time, Sondheim himself was a brother of Beta Theta Pi. How did a queer Jewish man fare within the fraternity system? How did he make it past the often-discriminatory rush practices?

It’s not as if Sondheim’s history wouldn’t make for an interesting story, if the archives were approached with curiosity rather than flat retelling. It’s just a shame it’s not the story Our Time chooses to tell.