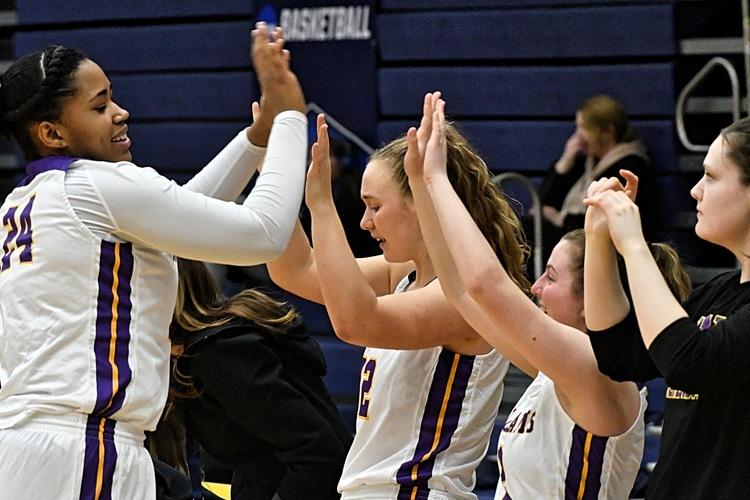 Less than 24 hours after topping Albright in the first round of the NCAA Tournament, women’s basketball (20–8, 6–4 in the NESCAC) defeated Ithaca (23–6) 69-61 on Saturday to advance to the Sweet Sixteen. This marks the women’s first NCAA appearance since 2015.

“We are thrilled to still be playing this deep into March, and I’m so proud of our team and the way they’re playing,” Eph head coach Pat Manning said after Saturday’s win. “This group is the epitome of a team, and I’m just thrilled that I have an opportunity to have another week with them.”

In Friday’s win against Albright, the Ephs fought hard to secure a 68-46 lead when the final buzzer sounded. In the first quarter, the two teams traded blows, with the Ephs taking a narrow 14-13 lead at the end of the quarter. The Ephs, however, began to pull away in the second, going on a 10-0 run and extending their lead to nine at the half.

The third quarter saw the Ephs dominate on defense, holding the Lions to just seven points. Despite Albright holding the women to ten points, the women still took a double-digit lead into the fourth quarter.

The Ephs only extended their lead in the fourth, scoring 24 points on offense and blowing the game open by the middle of the quarter. The Ephs’ largest lead – 22 points – ended up being the final margin.

In Saturday’s game, the Bombers seized an early 16-8 lead, but the Ephs played a 12-2 run to take the lead early in the second quarter. Mikaela Topper ’21 scored a 3-pointer with under a minute left of the first half and cut the halftime deficit to just one point at 30-29. Maggie Meehan ’21 and Topper scored 17 of 29 points in the first half for the Ephs.

In the game’s second half, the Ephs took the lead after shooting an impressive 10 of 14 (71.4 percent) from the field in the third quarter. With a four-point lead going into the fourth quarter, the Ephs never allowed the Bombers to cut the point deficit.

“We started off a bit slowly, but when we relaxed and just played our game, everything else started falling into place,” Manning said. “[Initially], we were reacting more to them than just playing our game. In the second half, though, we did what we do best.”

“[Dauk, Biesbrock and Martin] off the bench were a tremendous boost to us,” Manning said. “They made big impacts every minute they played.”

On Mar. 13, the women will continue in the tournament, taking on No. 1 Tufts (28–1, 10–0 in the NESCAC). The Jumbos suffered their lone loss of the season against Bowdoin in the finals of the NESCAC Tournament.

The Ephs have played the Jumbos in two close games this season and feel especially motivated to face a familiar NESCAC rival with an Elite Eight berth on the line.

“We’re playing at a really high level right now,” Manning said. “Our players are confident, and this is the best that we’ve played all season. We’re peaking at exactly the right time.”