The voice that closes Sawyer: an inside look at the ‘nerd bell’ 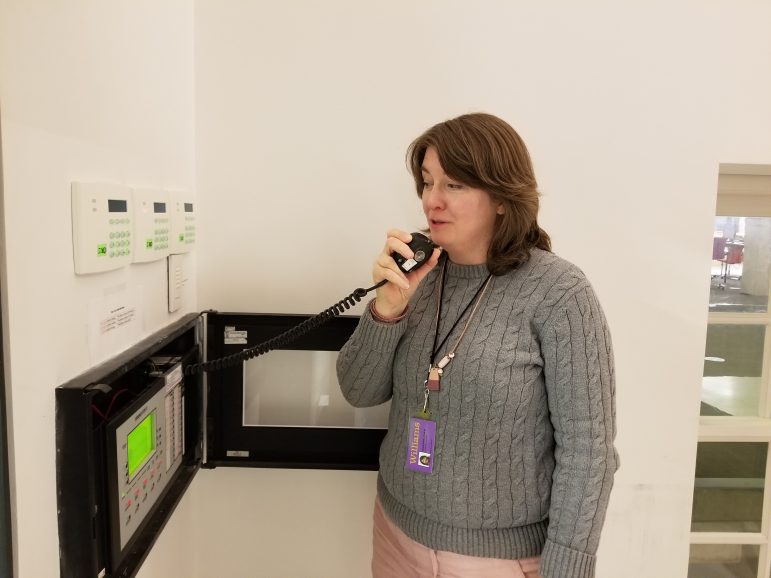 A blaring voice closes the library at 2:30 a.m. every weeknight and at 10 p.m. every Friday and Saturday.

When I went to investigate the mysterious phenomenon, I found that the voice belonged to Julie Henderson, one of the two Sawyer librarians who typically stay late to close up the library.

“I had never worked this type of shift before, but now I really like it,” said Henderson, who started working in Sawyer in September. “I walk around and make sure everything’s okay… I’ve gotten to know a lot of the students.”

Henderson said she initially had trouble with the nerd bell, which echoes “like when you have a bad connection on the phone.”

But she is now an old hand. She showed me her nightly Sawyer library closing routine. First, she counts the number of students in the 24-hour room to keep a log of how many people use it. Next, she turns on the speaker system affixed to the library wall and delivers the first nerd bell warning.

One night, Henderson allowed me to operate the 2:15 a.m. nerd bell. First, I practiced my line a few times: “The library closes in 15 minutes.”

When it was time, she held the microphone and turned it on as I leaned in. I was about halfway through the announcement when the echoing started. Startled, I kept speaking, only stopping when complete. The last word, “minutes,” rang out over the loudspeakers; then there was silence.

Had I done a good job? Yes, replied Henderson and the two students working at the desk with her. I had served the nerd bell well.

Some student employees will also deliver the nerd bell message, but not all receive that honor. Derek Rosario ’22, who sometimes works the night shift, said he has a “complicated relationship” with the nerd bell. “I’m only a recipient of the nerd bell,” he said, having never delivered it himself.

Manuel Matos ’21 also works the late-night Sawyer shift. He operated the bell once during a snowstorm last semester, when Henderson had to leave early.

The nerd bell is “actually really fun, but it’s also surprisingly challenging… There’s a technique to it,”  Matos said.

Carlos Cabrera-Lomelí ’20 has worked the late shift at Sawyer all four years he has attended Williams. “If you want to know the true state of Williams, do the graveyard shift,” he said.

He has also operated the nerd bell many times.

“It’s a cathartic rhythm of the College,” he said. “Around 2:30, I’m gonna start waiting for it, even when I’m living somewhere else… It’s a labor of love.”

Jonathan Miller, director of libraries at the College, described the history of the nerd bell.

“We shortened the message,” he said. “It used to go on about coming to the circulation desk to check out books, but it was really irritating and kind of obvious, so we cut it back to the basics. The message — even repeated three times — doesn’t always work, and we still occasionally find people stuck in the library after closing.”

Some time after the second nerd bell announcement, a group of two or three Campus Safety and Security (CSS) officers arrives. They check every floor of Sawyer for lingering students, then turn off lights, lock and arm the building, explained CSS officer Scott Braman.

Maysa Shaer ’22 was one student who got nerd-belled the night I visited. She was up late working on a two-page response paper for one of her classes.

“The first time I was nerd-belled, I was very afraid,” she said “The ‘bell’ is loud.” With time, though, she has gotten used to it.

Another student to get nerd-belled on that particular night, Ashish Solanki ’20, said, “I’m an all-nighter puller, so I hear the bell basically every day. After a while, you depend on it, almost.”

Having heard the nerd bell so many times, Solanki has become fond of it. “For me, it’s like a wake-up call,” he said. “It becomes an important reminder, in a sweet way.”