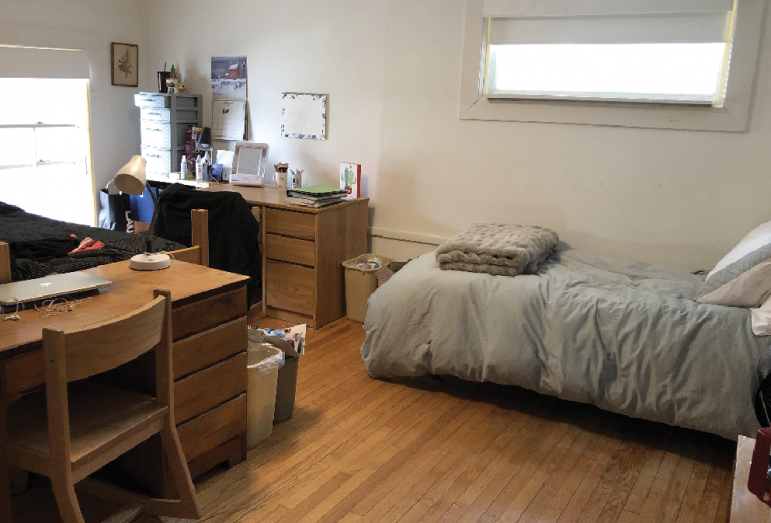 IRENE LOEWENSON/THE WILLIAMS RECORD Some rooms, such as the one pictured above, may be used as “double-triples” if deemed necessary.

The Office of Student Life (OSL) has announced a plan that would enable the College to house more students than usual next year in the case of an “unforeseeable situation,” such as the cancellation of study away programs due to the recent coronavirus outbreak.

“These are being made in order to ensure we can accommodate students if an unforeseeable situation arises in the future, where we’d need to accommodate more students than normal in campus housing,” Doug Schiazza, director of OSL, wrote in an all-campus email last Wednesday, Feb. 26. In an email to the  Record, Schiazza wrote that a coronavirus pandemic would be “an example” of such a situation. Dean of the College Marlene Sandstrom noted last week in an all-campus email about coronavirus that the College was planning to implement changes to housing “if the outbreak continues and study-away programs are canceled.”

If more juniors than usual are on campus because of disruptions to study away, students would be housed according to what Schiazza called a “stepped approach.”

First, students would fill all the beds in regular housing, typically by picking into “dingles” — doubles being used as singles — and thereby turning them back into doubles. Second, rooms that Schiazza termed “double-singles,” formerly known as flex rooms for their ability to function as either doubles or singles, would be converted into doubles.

If all the dingles and double-singles were to be used as doubles, and there were still not enough room for every student — a situation Schiazza called “not likely, but still possible” in his all-campus email — doubles of at least 230 square feet would be made to accommodate a third student. These larger doubles are called “triple-doubles.”

Were all the dingles, double-singles and triple-doubles to be filled to capacity, Schiazza wrote, “we’ll then use short-term emergency rooms in Morgan Ground & Dennett Ground, which are typically held for urgent day-to-day situations that arise.”

Hanna Morgan ’22, who lives in a 250-square-foot double in Hubbell House that has been designated as a triple-double, said she was surprised to see her room on the list of triple-doubles.

“My roommate and I had a bit of fun considering how adding a third person to the room would impact our space,” Morgan said. A significant portion of her room’s official square footage is taken up by a walk-in closet. She said that her room could fit a third person, but likely only if two of the three beds were bunked.

“Additionally, we share a very small bathroom and three people using it would certainly not be ideal,” Morgan said.

Schiazza told the Record that the beds in the designated rooms could be bunked if needed. He noted that he only took square footage, and not room shape, into account while compiling the initial list of triple-doubles.

“If we get to a point of tripling any rooms, we’ll look them over in person to see how furnishings would fit,” he wrote. “It’s likely that some of the rooms won’t work in reality as triples.”

Like Morgan, Jackson Bibbens ’22 — whose double in Fitch House is 230 square feet — said he was surprised to see his room listed as a triple-double. To get a third bed and desk in his room, he said, two beds would have to be bunked. But the room could serve as a triple if truly necessary.

“If it really is a scenario where they would need to triple because of the coronavirus, I think people could make it work and just understand that the situation requires some unusual measures,” Bibbens said. “It would be livable, certainly no worse than some of the Frosh Quad doubles, from what I have heard.”

In both his all-campus email and his email to the Record, Schiazza stressed that it was unlikely that the College would actually have to use the emergency housing plan.

“Hopefully we won’t need to use any of these preparedness measures,” Schiazza wrote to the Record. “But it’s good to have a plan and to let students know what it is so that they can be prepared if we do need to implement it.”