Nikole Hannah-Jones speaks on the 1619 Project, legacy of slavery 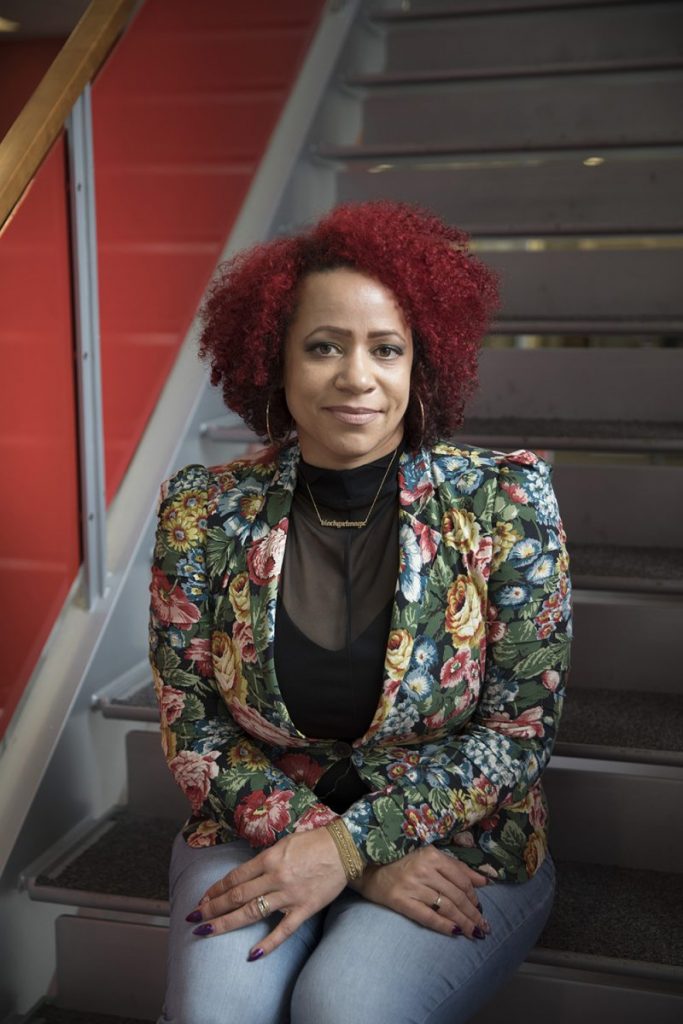 PHOTO COURTESY OF THE NEW YORK TIMES. Hannah-Jones spoke about her project on Feb. 26 in the ’62 Center.

Nikole Hannah-Jones, a staff writer at The New York Times Magazine and the curator of its 1619 Project, which puts slavery’s continuing legacy at the center of American history, began her talk to a sold-out audience at the ’62 Center for Theatre and Dance last Wednesday with a disclaimer. “You will not be inspired tonight — that’s not what I do,” she said. “You will likely feel a little uncomfortable over the course of my talk — that is what I do.”

In the two hours that followed, Hannah-Jones led the audience through 400 years of American history, beginning at the year 1619, which marked the first slave ship’s voyage from Africa to what is now the United States.

The 1619 Project, which was published in a special issue of The New York Times Magazine and a broadsheet insert in the Sunday newspaper last August, is now the basis for a podcast and  for curriculum changes at schools around the country. Hannah-Jones originally pitched the idea to the Times and penned the project’s introductory essay.

To Hannah-Jones, the 1619 Project’s principal assertion is that slavery is the foundation on which America is built and, therefore, where the American historical narrative must begin. While many traditional American history textbooks have started at the outbreak of revolution in 1776 or the arrival of the Mayflower in 1620, Hannah-Jones said the country’s origin stretches back to the arrival of its most formative institution: slavery.

For over two centuries before the U.S. declared independence, slavery operated as a powerful engine of economic exploitation. With the enslavement of 12.5 million Africans, the transatlantic slave trade was the largest forced migration in history, Hannah-Jones said, adding that 40 to 60 percent of that population did not survive the voyage. “A loss of life was just part of the business plan,” she said.

By the time the American Revolution broke out in 1776, she said, slavery was already integral to the country’s economy. Hannah-Jones highlighted the hypocrisy between the nation’s ideals and the actions of its founders, quoting the Declaration of Independence, in which Thomas Jefferson writes, “We hold these truths to be self-evident, that all men are created equal, that they are endowed by their Creator with certain unalienable Rights.”

After pausing for a moment, Hannah-Jones told the audience, “As Thomas Jefferson writes these words, he owns 136 people.”

This paradox plagues the history of the early republic, she argued, when ten of the nation’s first 12 presidents owned enslaved people. “That was where power was concentrated,” she said.

The founders reconciled this conflict between democratic ideals and economic interests, Hannah-Jones said, by deciding that enslaved people were not fully human. “It is at the Revolution that we make a choice,” she said. “When we make that choice, then we become a country founded on hypocrisy.”

In the centuries that have followed, Hannah-Jones said, slavery has proven to be at the core of the nation’s democracy. She pushed back against those who claim that slavery’s effects ended with the legal end of the institution. “It took a war that nearly tore our country apart to end it,” she said. “That should tell you something about how embedded and formative [it was].”

Through the Jim Crow era and into the twentieth century, black Americans continued to fight for basic rights and legal equality. “This was a brutal and devastating period, but black people had no choice but fight and try to get this country to live up to our ideals,” she said.

Causes championed by the Civil Rights Movement, Hannah-Jones said, served to enfranchise wide swaths of Americans, many of whom were not black. “Every rights struggle on this continent [that followed] owes its inheritance to the black rights struggle,” she said.

While the aftermath of slavery and the segregation that followed seem like the distant past, they are closer to the present than we would like to think, Hannah-Jones contended. Born in 1976, she herself is part of the first generation of black Americans to grow up with full legal rights. “We would like to think that this is ancient history, [but] you should not be surprised that black people still struggle,” she said.

Also, Hannah-Jones squared off with those who wonder why black people don’t just “get over” slavery, quipping, “Let me just say, no one wants to get over slavery more than black people. Trust me.”

This retelling of American history, Hannah-Jones and her colleagues write in the project, is crucial to combatting what W. E. B. Du Bois called “the propaganda of history.” Traditionally, slavery is regarded as a part of the nation’s historical narrative that ends with the signing of the Emancipation Proclamation. The 1619 Project serves to show how pervasive slavery has been and continues to be in America. “Nothing has been left untouched by slavery in U.S. history,” she said.

The legacy of slavery affects all Americans, not just those whose ancestors were enslaved, Hannah-Jones said. The nation’s wealth, obesity epidemic and system of mass incarceration, she argued, can all be traced back to the architecture of racial inequality that slavery fueled.

“Our inability to get over slavery does not just affect black people,” she said. “You can’t control those harms.”

During her talk and a subsequent discussion with Chair of Africana Studies Neil Roberts, Hannah-Jones addressed the criticism that the project has garnered from several prominent historians who claim that the project’s interpretation of American history is inaccurate.

In an open letter published in the Times last December, five scholars of American history called for the newspaper to print “prominent corrections” to remove factual errors and to make their fact-checking process for the project known to the public.

The letter criticizes the magazine for what its authors perceive to be an inaccurate reframing of history in order to serve an ideological agenda. The project’s interpretations of events, the letter reads, “suggest a displacement of historical understanding by ideology.”

Hannah-Jones argued that this refocusing of the historical narrative is an essential part of the historiographical process and is at the heart of the project. “We were not hiding this,” she said. “If you are a historian, you know that all history is revisionist.”

She said that much of the backlash against the project’s incorporation into school curriculum comes from a desire to stick to the traditional version of American history, rather than adopt a more complex approach. She also refuted critics’ claim that the project’s interpretation of American history is “too cynical” and unpatriotic. “Unless you don’t consider black people Americans, it is deeply patriotic,” she said.

Hannah-Jones said she has found deep patriotism in black communities, who she said consistently support policies that advance the public good. “Black people believe … that we don’t always have to be the selfish country that we are,” she said. Black voters, she claimed, vote against anti-immigrant and hateful platforms at higher rates than any other racial group. Thus, she added, black people are “the solution” to the country’s identity crisis, not the problem.

Since the post-Civil War period, Hannah-Jones said, black Americans have been staking their own claim to American identity and reconceptualizing what patriotism looks like. “They refused to leave,” she said. “In fact, they said, this is our country. We built this country. We are going to fight to make those ideals true.”