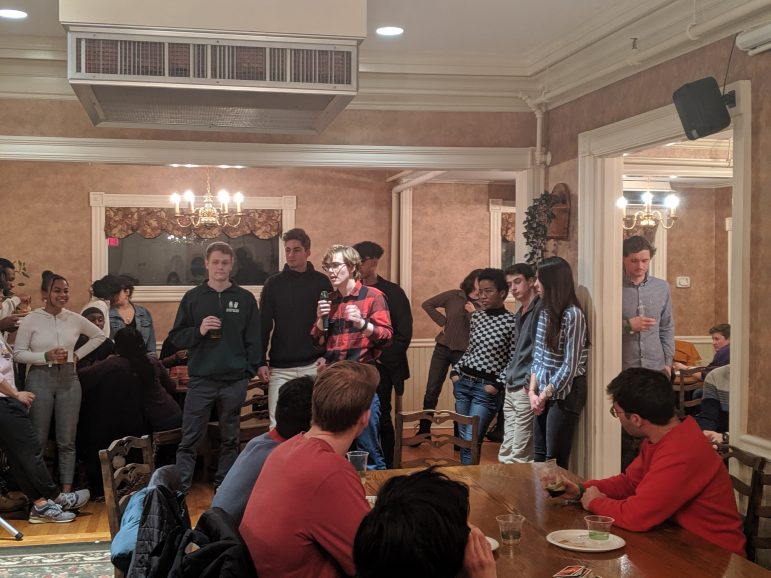 On Sunday, March 1, the Three Pillars Task Force released the results of its most recent election, which determined the members of the Williams Student Union and the Facilitators for Allocating Student Taxes (FAST). The election took place between Feb. 24 and Feb. 29, with a 26.2 percent turnout, and followed a student referendum abolishing College Council (CC) held earlier this month.

Vanessa Oeien ’22, a Williams Student Union representative for the sophomore class, said that she is looking forward to facilitating student communication with the administration. “I’m most excited for the chance to play a role in supporting all student advocacy on this campus and integrating the Student Union into the Williams community as a resource for all student organizations,” Oeien said. “I hope that we can improve upon the efforts of CC by actively and transparently seeking out concerns from different groups on campus.”

One of her co-representatives, Colin Pinney ’22, cited hope for reform as one of his reasons for running. “I hope that, working with my fellow representatives, we can help increase administrative transparency as well as enact real improvements for the student body, whatever those improvements may be,” Pinney said.

Remembering chaos in CC and ineffective governing and advocacy, many students are hoping that the new structure and their role in it will help create positive change.

Argenis Herrera ’22, the third representative for the sophomore class, said he sees the potential of the new body but also has some reservations. “The Williams Student Union has the potential to be a great conduit for change, but there is also a lot of room for error,’’ he said. “I ran because I want to help steer the WSU in the right direction.” He, Pinney and Oeien were elected from a field of five candidates.

Many of the representatives acknowledged that this new body is somewhat of a new frontier for student government. Jonah Tobin ’23 emphasized the unique opportunity the Student Union presents. “Without formal power, this will be an experiment to listen to and act on the needs and interests of the student body,” Tobin said. “I hope to create tangible change for the student body and be an open sounding board to their ideas.”

His fellow representatives for the first-year class are Emmanuelle Copeland ’23 and Cinthya Maldonado ’23. Two other candidates also ran but were not elected.

Some worry that the Williams Student Union in particular may not operate effectively, considering that it operates only as an advocacy body and has no formal power on campus.

Ananth Shastri ’21, a representative for the junior class, expressed concern that the organization could hurt student protest movements, in that the administration might only legitimize student complaints and concerns if they are expressed through Williams Student Union channels. However, Shastri has hope that they can help make the Student Union a positive advocacy body. “The WSU constitution is open-ended. It may be possible to interpret the constitution in a way that supports student movements instead of delegitimizing or bureaucratizing them,” Shastri said. “I’ll try to make the WSU a helpful body. If students eventually vote to dissolve the WSU, that should happen because of the WSU’s inherent limitations, and not because we representatives missed an opportunity to strengthen student activism.”

Shastri’s co-representative is Jonathan Stasior ’21. Stasior was the only candidate who appeared on the ballot; Shastri was elected with four write-in votes.

The senior representative for the Williams Student Union is Sara Shamenek ’20, who was elected from a field of 22 write-in candidates due to a lack of applications from the senior class.

Unlike the Williams Student Union, each of the positions on FAST had at least two competitors on the ballot. Tyler Johnson ’21 won for Club Sports and Competitive Teams representative, defeating one other candidate, while Ana Delgado Fernández ’22 won for Performance Groups representative against one opponent. Hipolito Vazquez ’22 was elected as MinCo representative over three other candidates, and María Fernanda Estrada ’23 and Essence Perry ’22 won the at-large FAST positions from a field of six candidates [Editor’s Note: Fernanda Estrada serves as a podcast editor on the Record].

None of the newly-elected members of FAST responded to a request for comment. The turnout for the election was 26.2 percent, with 571 total students voting. The student turnout rate was 13.5 percent lower than the turnout rate for the all-campus referendum to abolish CC, which had 868 total votes and a voter turnout of approximately 40 percent.

As of March 1, CC is fully abolished. FAST and the Williams Student Union will hold a joint meeting this Sunday where the official transition of power will take place. Elections for the third component of student government, known as The Advisory Board for Lobbying and Elections (TABLE), will occur later this spring, according to an email to the Record from Adly Templeton ’20, Task Force chair.