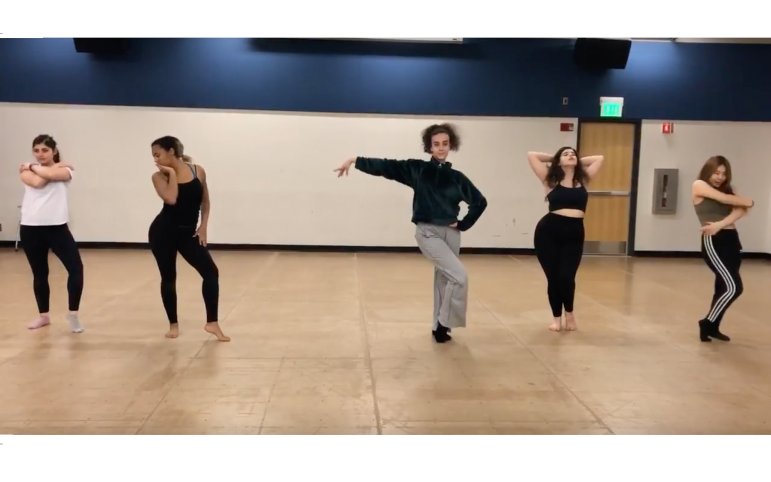 Conceived, planned and brought to life this past Winter Study, the Williams Burlesque Club has quickly established itself as a space of inclusivity and expression for all students interested in exploring their identity through theater and dance.

When Rose Angelina Martin ’23 met Vanessa Silva ’23 last semester, the two had a conversation about theater at the College that brought to their attention the need for a space like the one they are working to create. “[We talked about] things like who performs? Where, and when, and why and how? And what kinds of art get the forefront… About art forms that are underrated and over-stigmatized,” Silva explained. Martin added, “And when it comes to having a marginalized identity in theater, or in any type of art form, it’s hard to find a place where you can feel fully accepted for every part of your cultural and gender identity…. [Through] that conversation we thought ‘Hey, what about burlesque?’”

From the beginning, the two have been clear about their intention to re-appropriate burlesque  and make their club a space where people of all backgrounds feel comfortable and safe. They conducted research, held discussions about intentionality and practiced complete transparency with the cast at the very beginning in order to acknowledge the troubled history of burlesque, and to explain how and why they want to reclaim the art.

“We researched [burlesque] for a bit and a lot of its origins lay in minstrel shows and the objectification of women,” Martin explained. “We realized that’s a horrible history. But then a lot of things, even [here at] Williams … have started with very horrible pasts.… What we can do now is acknowledge [these pasts], fix the current systemic issues and learn how to heal from these experiences. Right now, there is a movement called neo-burlesque which many schools and troupes are joining. There’s “Boylesque” across the States, there’s “Brown Girls Burlesque”– [these] are just two amazing troupes that are doing just that. They have the workshops, they have the shows, they have the speakers … and that’s something that we really want to accomplish with this [group].”

Co-directors of the Williams Burlesque Club, Martin and Silva, have backgrounds in theater, dance, music and holding space for marginalized groups. Silva attended a theater academy in high school and has extensive experience choreographing; having choreographed musical  numbers through StuCho (Student Choreographer’s Coalition) and performances for the Purple Valley Play Festival, to name a few. Martin was previously a part of a chorus, theater group and step team, as well as leader of a women of color affinity group and counselor for people dealing with events, experiences or traumas related to their cultural or racial identities.

“Once we started having this conversation of why we wanted to do this, it became a lot about people finding their own path and what this show means to them…. We wanted to create a space where people of any identity could come together and do what it is that they want to do, and have a space to be liberated through their body, but also be in conversation with each other, talking about what that means,” Silva said.

To this end, the leadership of the club also includes Dylan Nadelman ’23 as stage manager, Kellen Zhao ’23 as production manager, Joe LaRocca ’22 as pianist and music director, Raphael Rakosi-Schmidt ’23 as MC and Eddie Wolfson ’23 as featured choreographer. As a collective, leadership has chosen to break up the dance numbers into categories of beginner (which are non-audition), intermediate and advanced. This structure, as Silva explained will make it such that, “even if you have never in your life stepped on a stage, you can be a part of this if this is something that interests you.”

In order to foster an environment of safety and inclusivity, Martin explained the importance of having a song and dance number devoted to women of color and non-binary people of color who “want to explore how [their] race and/or cultural identity relates to sexual freedom and performance.… Everyone has time to do a solo where they’re answering a prompt … like how do you express ecstasy, how do you show off your skin, how do you show off your beauty, who are your ancestors…. So, there’s a lot going into that song just to make sure everyone feels good, everyone comes out learning something.… The song is all about self-care and exploring yourself.”

Although their first show is still in production, the group has already begun discussing the future of the club. They have been looking at ways to improve the overall experience, as well as facilitating a higher level of learning and engagement. This has taken the form of thinking of ways to garner more participation from people of different gender identities and interests, as well as people with varying accessibility needs. Hosting workshops, bringing speakers, forming partnerships with Burlesque groups at peer institutions and organizing movie nights are also on the agenda, as is becoming registered as an official student organization and the procurement of funding for future events and costumes.

“This isn’t only a show,” Silva said. “We are trying to build a community. So, keeping ties even after the show is over, and between the shows and through the rehearsal process until the next one, [is important].”

“[What we do] shouldn’t just be limited to making the show and having the rehearsals for it,” Martin added. “Burlesque is so interesting. The history is fascinating, the current movement is fascinating, there’s so much that we can learn and gain from it, that I think is really needed here … People have been saying that they’ve felt unrestricted in a way that they haven’t felt in a long time or ever before, or [that they’re] more comfortable with their bodies [as a result of their participation in the group].”

“Also [there’s a feeling of] safety,” Silva furthered. “We’ve gotten a lot [of feedback from participants] that it’s become a safe space for people to not only embody these things, but also to have conversations about them and to have a little bit of self-reflection and growth. Which I think is why we wanted to do this. It’s the best part about all this.”