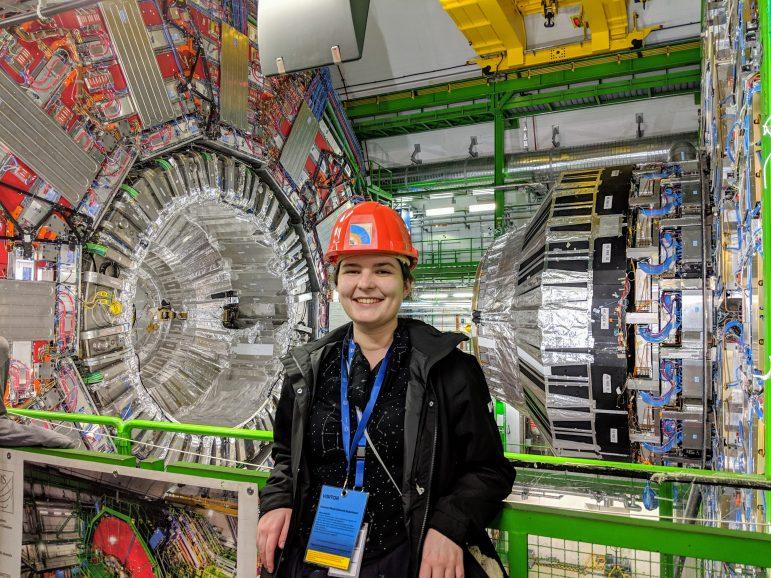 Nicole Ford ’20 knew what she wanted to do when she came to the College: study studio art and astrophysics. While these two interests are seemingly polar opposites, Ford has taken advantage of the liberal arts curriculum to create art “informed by and infused with science.”

Ford’s interest in art and astrophysics is well established. Her mother, an attorney with a background in astrophysics, recognized Ford’s artistic talent early on and encouraged her to pursue it further. Ford cited her father, an amateur astronomer, as a source of encouragement. “He would hook up the telescope to the T.V. so we could see what the telescope was seeing,” she said.

One of nine senior art studio majors, Ford is currently very busy creating pieces for her senior art show. One of the most recent prompts in her senior art seminar was to fill a 10’ by 10’ area, an exercise in taking advantage of the vast space afforded by the upper floor of WCMA, where the senior art show will be hosted in May.

For her senior project, Ford explores sculpture and the relationship between two- and three-dimensional space. She is considering starting with a flat surface, perhaps the wall, and then creating a protruding structure. Thematically, she is fascinated by recreating organic forms, especially patterns that recur in nature in different ways. Papier mâché is a medium she believes will be useful, as she intends to focus particularly on textures.

Her academic foresight made it possible for her to juggle both majors and also have time to spend a semester abroad at the Boston University Geneva Physics Program. There, she studied art history and physics while working at the European Organization for Nuclear Research (CERN), using the particle accelerator. She was impressed by art exhibitions CERN commissioned to showcase the physics research that was being conducted. “Europe knows where it’s at. It is very interdisciplinary compared to the United States.”

Ford explained that it is more common in Europe to see the intersection of arts and sciences. As she searches for potential careers, she prioritizes interdisciplinary work. At a conference for women in physics that she recently attended, she was inspired by a panelist from the Pratt Institute in Brooklyn who encouraged students to bring science into art.

Ford has identified NASA as an institution that has been dedicated to public engagement with their work, while she finds research universities to be lacking in this respect. For Ford, working for NASA would be a dream. “If I want to work there, they have to know who I am,” she said.

After Williams, Ford is looking to go to graduate school for astrophysics and perhaps continue the research she is currently conducting for her thesis on galaxies outside of the Milky Way.  She hopes to become certified in graphic design and pursue scientific illustration, as digital design is not a medium the art department offers many classes in.

Her ultimate career goal would be to research and make illustrations demonstrating the science in both an artistic and accessible way. “A lot of scientific findings are interesting, but the illustrations are confusing, or not that fun to look at. There’s a lot missing there,” she said.

As her four years at the College come to an end, Ford is as confident in her future as she was when she started. She can say confidently what many of us hope to one day claim: “This is what I want to do.”