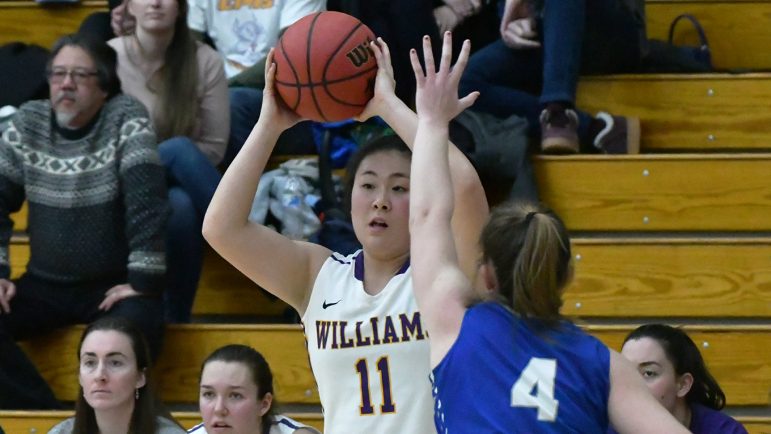 Emily Chang ’20 looks for a shot against Tufts during the NESCAC semifinals, where the Ephs battled hard but lost 69-63. (Photo courtesy of Sports Information.)

In the NESCAC Semifinal, women’s basketball gave the undefeated Tufts Jumbos all they could handle but ultimately lost 69-63.

The Ephs’ defense successfully held back the Jumbos for most of the first half. With a strong defensive effort, the Ephs took an early 11-4 lead with 3:30 left in the first quarter. The Jumbos’ offense returned to outscore the Ephs 8-2 for the rest of the quarter. The Ephs kept pace with the Jumbos in the second quarter, cutting the halftime deficit to just four on a layup by guard Mikaela Topper ’21. The Ephs were down 30-26 by halftime.

Emily Chang ’20 scored a 3-pointer on the Ephs’ first possession of the half, narrowing the deficit to just one. The Jumbos’ offense responded with a 7-0 run and grew the lead from there. Another 7-0 run toward the end of the quarter culminated in a 3-point play by Tufts’ Erica DeCandido and gave the Jumbos a 12-point lead — their largest of the game — with just over two minutes left in the quarter. Though Chang made two 3-pointers and Morgan Dauk ’21 contributed six points, the Jumbos finished the third quarter up 10 points at 52-42.

In the final quarter, the Ephs had the deficit down to just four with less than five minutes left, but the Jumbos scored on their next three possessions. Williams once again narrowed the deficit to five points with just over a minute left. A final 3-pointer by Katie Brule ’20 bounced off the front of the rim, and Tufts secured the rebound, effectively ending the game.

The Ephs never gave up, even when trailing by double digits against the undefeated Jumbos. “We came up with some big shots in the fourth, which started with some key rebounds on the other end,” head coach Pat Manning commented. “That’s our team — we just don’t quit, we just keep coming at you, and we keep fighting. When you know that you’ve left it all out there, that’s a great feeling. We pushed the No. 1 team in the country to its limits.”

The Jumbos took a significant 22-13 rebounding advantage into the half, but the Ephs outrebounded Tufts 22-15 in the second half. The difference in rebounding in the halves was very noticeable and, according to Manning, a key reason why the Ephs stayed in the game late. “In the first half, they hurt us with rebounding, but we had a much better second half,” Manning said. “Our guards — especially Morgan and Gabby — crashed the boards much better in the second half.”

Though the Jumbos had a strong shooting game overall, going 28 of 59 (47.5 percent), the Ephs held them to just three of 14 (21.4 percent) from deep. The dip in 3-point shooting is especially significant, as Tufts gashed the Ephs with a stunning 11 of 18 (61.1 percent) mark from beyond the arc in their regular-season match.

Reflecting on the season, Manning said she was impressed by both the Ephs’ relentless work ethic and their ability to pull out close games this year. “We were coming off two kind of disappointing seasons where we didn’t pull out close games, but we got much better at that this year,” Manning said. “We had overtime wins, one-point wins, and I think that helped us build confidence. Our success of the season started at the end of last season, because our returning players pushed themselves, worked really hard in the summer and fall, and wanted to do what we knew we were capable of doing.”

Despite the loss, the Ephs’ season continues. On Monday, the Ephs earned an at-large berth into the 2020 NCAA Div. III Women’s Basketball Tournament. This is the 10th time in program history the Ephs have earned an NCAA berth but the first since 2015.

On Friday night, the Ephs will head west to Ithaca, N.Y., for a first-round match-up with Albright College.