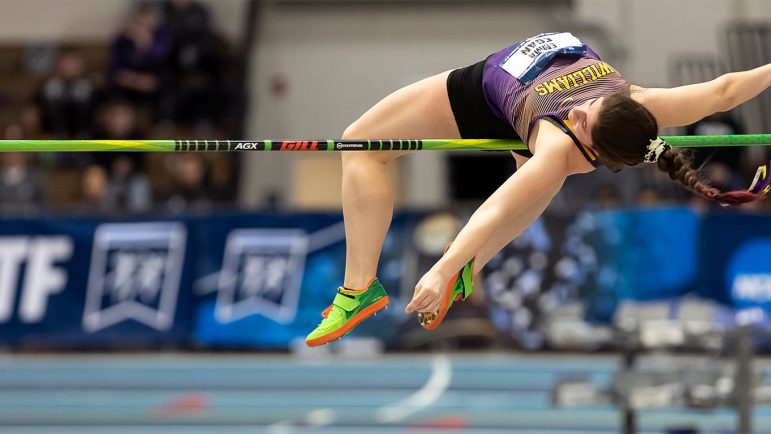 “An awesome full-team effort,” head coach Nate Hoey said. “In every way the team competed with heart, passion and intensity from event No. 1 through event No. 21.”

In the final event, Summer-Solstice Thomas ’20 represented the Ephs for the women’s pentathlon. Thomas finished all five events at a steady and consistent pace to secure second place with 3250 points.

On Day Two, the Ephs continued their momentum with the 60m dash. Kiara Tan ’22 finished in 7.85 seconds for third place. In the 200m,  Powell finished in 25.94 seconds, a new personal best, to secure third place.

The Ephs’ 4x400m relay team — Collison, Iannelli, Rusch and Ella Dunn ’21 —  won the event with a facility record. In the 400m sprint, Powell crossed the finish line in 57.30 seconds, taking second place while Collison and Dunn came in fifth and sixth, respectively.

In the 3000m, Bourne  finished first with a facility record and personal best of 9:55.

In the high jumps, three Ephs finished within the top ten. Emma Egan ’20 tied for first with a height of 1.75 meters. She eventually won the tense jump-off to take first place. Summer-Solstice Thomas ’20 had a personal best height of 1.65 meters to place fifth.

The Ephs dominated the long jump, sweeping second through sixth place. Izabelle Ith ’21 led the squad at second place and a distance of 5.47 meters. Egan came in third with a jump of 5.42 meters. Tan and Kristen Chou ’23 both had their personal best jumps of 5.40 meters, finishing fourth and fifth, respectively. Finally, Hao finished in sixth with a jump of 5.38 meters.

Mazie Alexander ’21 had a strong weight throw with a personal best of 15.92 meters, earning fourth place.

“They supported each other and brought great energy all weekend,” Hoey said. “I’m proud of how this team has focused on embracing and enjoying the ride and being in the moment.”

The women’s will next compete at the Tuft’s Last Chance Meet in Boston on Mar. 7 at 10 a.m.

Cailin Stollar ’21 is a member of the women’s track and field team.