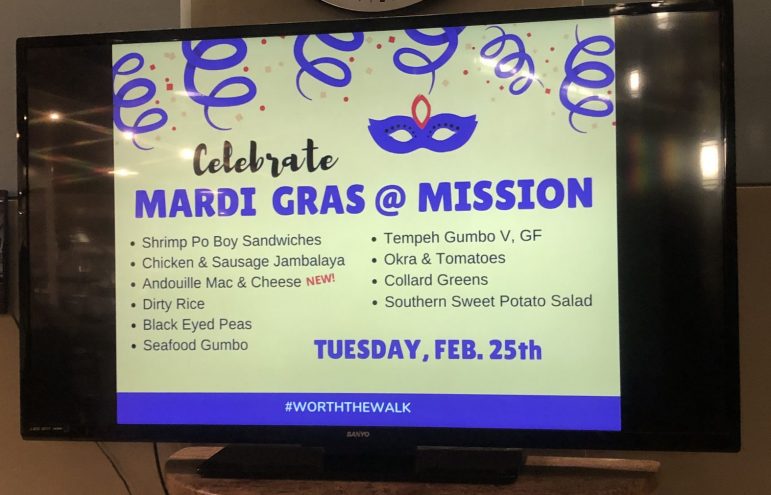 Allison Li ’22 and Mira Sneirson ’22 dined at Mission for the occasion and, almost in unison and with very little prompting, proclaimed their love for Mission and themed dinners more broadly.

“Mission is the best dining hall, mostly because it has a lot of theme dinners,” Sneirson said. Sneirson, a Georgia native, confirmed the authenticity of the Southern-inspired food of the evening.

“We go to pretty much every [themed dinner],” Li said. “I appreciate the creativity… It’s nice to have new foods, as the other [dinner menus] are on a cycle so it’s [food] we’ve seen before. It’s nice to get some variety.”

As a Zilkha Center intern, Li has been closely involved in the themed-dinner crafting process. She helped plan the Real Food Day dinner that took place last October during the Zilkha Center’s Food Justice Week.

Last year, the Zilkha Center and Dining Services collaborated on the “150 Mile Meals,” which were three special sustainable meals for Earth Day. Li explained that this event paved the way for others, such as the Real Food Day dinner.

“We also wanted it to be dinner at all three dining halls so that every student who went to dinner that night would participate in the event and learn more about sustainable food,” Li said.

The planning process for the Real Food Day dinner was similar to how themed dinners are planned. Typically, a student representing a group on campus reaches out to Dining Services to organize a meal that brings awareness to a certain cause or celebrates a particular identity or cultural background.

Last month, Mission hosted a dinner that commemorated Black History Month. There are also various seasonal and holiday-driven meals — such as the Halloween, Thanksgiving and December holiday-themed dinners — that are done on an annual basis and organized exclusively by Dining Services.

“When working on very specific cultural events we always work with the student group in developing the menu,” Director of Dining Services Temesgen Araya said. “When working with seasonal menus … the dining team collectively creates a menu or … [uses] the same menu from the prior year, depending on feedback.”

When collaborating with a student group, Dining Services will provide feedback on the ease of implementation. They take into consideration the ability to procure certain products or ingredients, as well as the feasibility of making the desired food given the specific dining hall’s kitchen unit layout. Themed dinners most often take place in Whitmans’ or Mission because they can accommodate more people than Driscoll.

In collaboration with the dining nutritionist, Dining Services must review the major allergens in the chosen dishes, as well as examine the types of proteins offered and the availability of vegetarian and vegan alternatives.

“We communicate if a specific [dish] is labor-intensive, and look to source these items or alter menus to make it achievable with the dining staff,” Araya said.

Planning and organizing a themed dinner is generally not drastically more labor-intensive or complicated than serving a regular dinner.

“The difficulty really falls onto the unit manager and first cook during the menu planning process in researching items, contacting our providers [to see] if they carry those items, creating the recipe and making sure our dining nutritionist verifies all major allergens,” Araya said.

“Sometimes there are challenges in finding specialty products or recipes that are authentic to the meal that is being planned,” said Unit Manager at Mission Charlotte Clark. “On the production side, it’s about the same level of difficulty. Our staff of culinarians does an amazing job of creating the chosen recipes.”

Several unit managers described a mood of excitement around the organization and implementation of themed dinners.

“Themed dinners are a part of the services we provide as part of the hospitality business,” Unit Manager at Whitmans’ Jerry Byers said. “They are designed to celebrate cuisines around holidays and special events. Everyone who is passionate about the food business looks forward to highlighting their skills and generating excitement.”

“Themed dinners are something our staff take a lot of pride in,” Clark said. “They really love to showcase their talents, and new recipes provide them a chance to do so. I think that themed and special dinners help us to create more of a sense of community. It allows our staff to create something special, and it allows the students to celebrate days that are important to them.”

Themed dinners also provide an environment in which students and staff can work together. “Some student groups even come and help with food preparation, which makes them even more special,” Clark said. “The staff loves working side by side with them.”