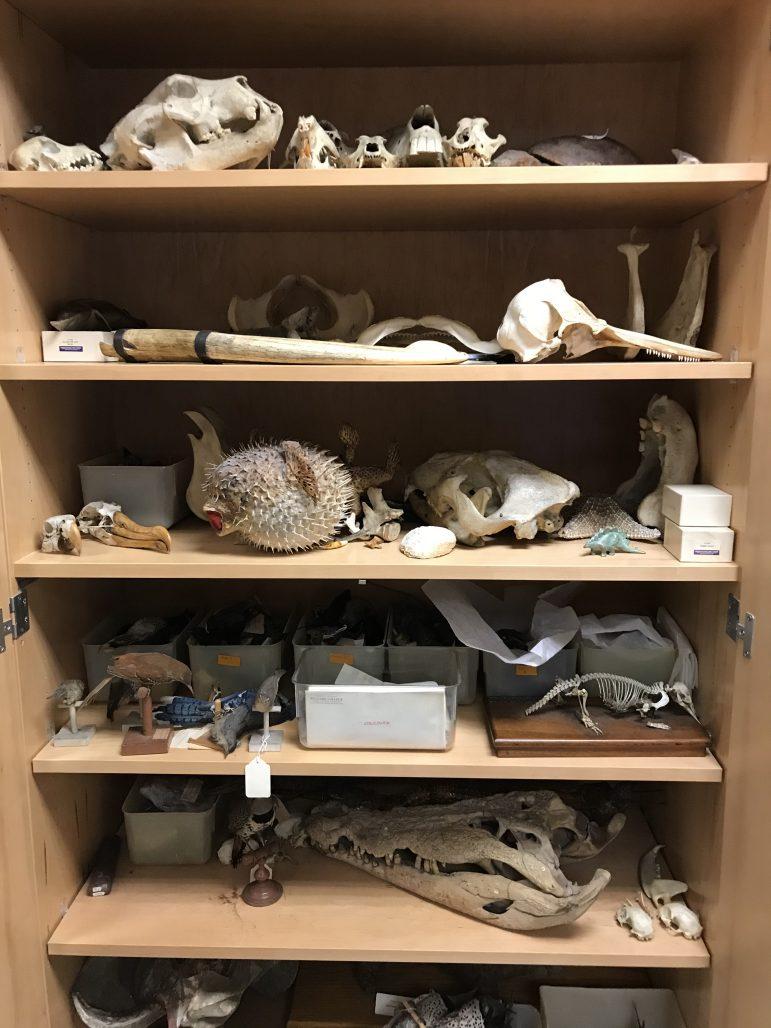 RUSSELL BLAKEY/THE WILLIAMS RECORD A taxidermy shelf on the fourth floor of the biology building is home to pufferfish and other specimens.

RUSSELL BLAKEY/THE WILLIAMS RECORD A taxidermy shelf on the fourth floor of the biology building is home to pufferfish and other specimens.

Locked in a cabinet on the top floor of Thompson Biology sit two taxidermized birds, perched beneath protective glass. They’re passenger pigeons, relics of a species gone extinct over a century ago. And they’re not alone.

The Herbarium, a secluded biology lab, is home to dozens of specimens, many from endangered or extinct species. Shelves lining the walls are crammed with assorted bones and taxidermies. Most are birds, but there is an impressive variety. Among the woodcocks and mallards is an inflated pufferfish, a tortoise skeleton and a Canada lynx.

So, where did all these come from? The answer lies in the College’s infancy and from sources including the Williams Biographical Annals and a collection of geological correspondence from Amherst Library. It turns out that the story of these taxidermied creatures is intertwined with the beginning of science education at the College, as well as the inception of study abroad programs.

In 1793, natural sciences like geology and biology were relatively new fields. The College, having no lab spaces, offered only a few theory-based science courses. As a result, student interest in the sciences was quite limited. This changed in the 1830s when Amos Eaton, Class of 1799, travelled across the East Coast to give a series of geology lectures. One of his stops was his alma mater.

According to archived information from students in attendance, Eaton did not disappoint. He appears to have captivated his audience in much the same way as the pastors of the Second Great Awakening. In 1835, inspired by his lecture, students and professors at the College formed The Lyceum of Natural History, a group dedicated to “the study of the natural sciences, and the prosecution of antiquarian researches.”

The Lyceum was primarily a scientific forum. Members gathered every two weeks to discuss the latest discoveries and present essays they had written. But more importantly, the group established a tradition of studying abroad. According to archives, one of its first meetings was not on campus but in Nova Scotia, where members travelled in August 1835 to examine “rare mineral productions.”

The Nova Scotia trip was an overwhelming success. Somehow, despite the voyage’s strictly geological mission, the Lyceum returned to campus with hundreds of biological specimens. In addition to a menagerie of animal corpses, most of which were taxidermized, the group obtained a number of donated animal fragments, including a mammoth’s tusk and a swordfish’s sword. Students collected just about everything; as the Lyceum’s 1852 catalogue says, “These are our wealth — a bird — a coin — a mineral — a flower; or even a stick with a curious knot on it will be acceptable.” The collection eventually contained thorns from George Washington’s garden, a chunk of Napoleon’s house and a scrap of Queen Victoria’s dress from her coronation day.

The Lyceum’s cabinets, though spacious, were no match for the students’ enthusiasm. After a second voyage in 1854 to Newfoundland, storage became a serious problem. To house the group’s massive collection, Nathan Jackson, Ephraim Williams’ first cousin once removed, erected Jackson Hall, a space explicitly for the Lyceum to display its taxidermies. Today this space is better known as Driscoll Dining Hall. Every time you eat a meal there, know that you’re probably sitting where a dead moose once stood.

The Lyceum thrived for the next few decades. Members conducted four more official voyages, going as far as the Amazon River. As time went on, however, natural sciences were adopted into the standard American curriculum, and the group slowly became obsolete. In 1882 the College built a biology lab, allowing students to pursue science on campus. Lyceum records end in 1914. Smaller academic voyages continued, though it is unclear if these were connected to the Lyceum in any way.

The Lyceum likely would not have lasted much longer regardless. In 1935, 100 years after the group’s inception, three students and a professor from the College died aboard the SS Mohawk when it collided with another vessel. They had been en route to the Yucatán Peninsula where they planned to study Mayan ruins. The Symmes Gate, a hulking wrought-iron monument guarding the entrance to Frosh Quad, commemorates those lost and the tragic end of a century-long school tradition.

Of course, this was not truly the end of study abroad at the College. Every year, much of the junior class leaves the country. And in memory of the Lyceum, Professor Emeritus Markes Johnson paid homage to the group’s first voyage.

“Williams students organized [a trip] at the end of the school year 1980 to replicate the Lyceum expedition to Nova Scotia,” he said. “We managed to revisit all the same land sites they reached by sea.”

Its name may be lost to the history books, but the Lyceum’s memory is not. The ancestor of study abroad, it will always be an example of what passionate students can achieve. And its famous collection, though weathered by time, now resides within the Herbarium. The collection exists as an intimate record of life and a link to school history, all resting quietly in cabinets on the top floor of the biology building.