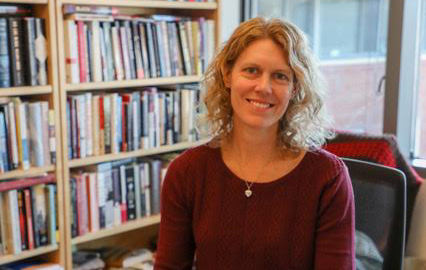 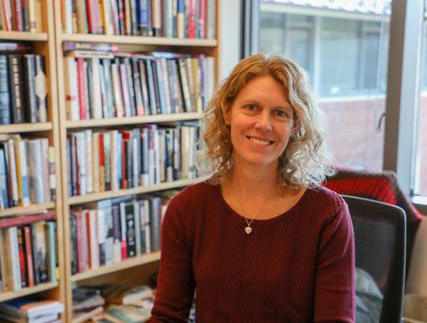 Professor of History Jessica Chapman said she plans to return to Kenya in May. (Zoe Bank/The Williams Record)

For decades, St. Patrick’s High School has graduated students who have broken world records and won Olympic gold models in running. This powerhouse high school, located in Iten, Kenya, has also sent students to universities across the United States with scholarships to run in NCAA teams.

How did runners from Iten rise to international prominence, winning NCAA championships and world championships alike? This is one question Professor of History Jessica Chapman seeks to answer in her forthcoming book on Kenyan runners.

Part of this story starts at the 1968 Mexico City Olympics, which constituted, in Chapman’s words, “a coming-of-age party” for Kenya’s athletes. In a recent talk in the College’s Faculty Lecture Series, Chapman described how the Games, like the rise of Kenyan athletics more broadly, took place against the backdrop of Kenya’s postcolonial political development, as the country negotiated its resistance to apartheid South Africa and its own position within the international system of the Cold War.

Kenyan runners participated in the 1968 Olympics only after a threatened boycott that resulted in the revocation of South Africa’s invitation to the Games, which became the platform for a Black Power demonstration by U.S. medalists at an awards ceremony. Despite the political controversy surrounding the Mexico City Games, the dominance of the Kenyan runners was hailed by its government as a harbinger of the country’s promising future in both international sports and the competitive Cold War world.

However, with subsequent pan-African Olympic boycotts in 1976 and 1980 and persisting economic underdevelopment limiting national investment in sports, the training and recruiting of Kenya’s best athletes increasingly fell not to the government in Nairobi, but to boarding schools in the Rift Valley, the most prominent of which was St. Patrick’s High School.

These boarding schools became the site of a transnational exchange of athletes. Many of their students went on to run on scholarships from colleges and universities in the United States, with connections facilitated by official U.S. State Department coaching tours and friendship meets.

“That was only able to happen because of the fact that Kenya was fundamentally in the Western political sphere,” Chapman said.

Following the story of the runners, Chapman went to Iten to find interview subjects for her research.

“I was interested in mainly the first pioneering generation of runners that were active from the ’60s through the ’90s,” Chapman said. “What I wanted was to understand their experience with Kenyan running in its international context, so I sought out people who had some type of experience with international migration and competition.”

Chapman was introduced to coaches and runners in Iten by a local “fixer,” Godfrey Kiprotich, who specializes in connecting foreign journalists and researchers to people involved with running in Iten.

Chapman also had a research assistant, Felix Biwott ’21, during this first trip, who not only attended St. Patrick’s High School himself but also runs for the varsity cross-country team at the College. Biwott arrived in Iten a few weeks before Chapman to do preliminary research, and later accompanied her on interviews and did follow up work after she left.

“I first got to know [Biwott] when I asked him if I could interview him as the subject of the book, and then once I got to know him a little more, I realized, ‘Hey, maybe there’s a potential collaboration,’” Chapman said.

With the first group of runners that Chapman interviewed, she was interested in learning about their entrance into the competitive running scene in the U.S., which brought to the fore the agitated race relations and latent nativism endemic in the era.

“You got what many saw as an uncontrolled flow of people and transfers of culture and ideas that was frustrating in many ways to both Kenya’s political project and to what many in the United States would like to see in terms of regulating sport in the United States as a fundamentally American phenomenon,” Chapman said. “So I talked a little bit about how you saw backlash against Kenyan runners in the NCAA.”

During the ’80s, for example, there was a movement to try to restrict prize money in professional road races in the U.S. to the top three American finishers — a naked attempt to resist the success of “foreign” competitors.

“When they talked about foreigners, it was very much Africans,” Chapman said. “They weren’t concerned about Swedish athletes.”

This backlash is one of the many political dynamics that Chapman identifies in the stories of Kenyan runners. But Chapman said she also wants to center the experiences of the runners themselves as participants in these larger processes.

“I’m very interested in telling the stories of how individual runners that came to the United States on college scholarships experienced American institutions of higher education — how they experienced being recruited from a small village in Kenya to come to the United States totally unexpectedly,” she said. “And what that process was like, how they experienced racism, because a lot of them were recruited to these small-town institutions in Texas and the American South.”

In 2016, Chapman was awarded a three-year Mellon New Directions Fellowships for her research, which, according to the Andrew W. Mellon Foundation, supports faculty in pursuing “systematic training outside their own areas of special interest.” Chapman first used her funding to learn Swahili for five semesters. Although she didn’t achieve perfect fluency, she found knowing Swahili helpful for cultivating goodwill.

“When I talked to people there, they kind of got a sense of my investment in them and in this project, [and] that it’s not this fleeting thing, since I learned Swahili,” she said.

Later, she used her fellowship funding to pursue graduate studies in cultural anthropology at the University of Albany, where she received the methodological training she needed to conduct ethnographic work in Kenya.

Chapman plans to return to Kenya in May. During this second trip, she said she wants to focus on interviewing female runners, who she said have a story entirely distinct from that of the male runners. Among other obstacles, female runners face cultural expectations of marriage and childbearing, and a lack of institutional paths, such as in the army or in other parastatal organizations, to receive training.

“So it wasn’t really until the mid-’90s, when international competition started to avail women of equal prize money and sponsorship opportunities and things like that, that you start to see an increase in the number of Kenyan women in the professional racing scene, and then they start[ed] to get recruited to U.S. colleges and universities in large numbers,” Chapman said.

After May, Chapman plans on taking more trips before she writes a complete draft of her book. “The problem with me is that I could keep going forever. At some point I need to cut it off and say ‘Okay, I’m gonna do the book now,’” Chapman said. But even if she doesn’t know when she will be done with the book, she already has an idea of what it might look like.