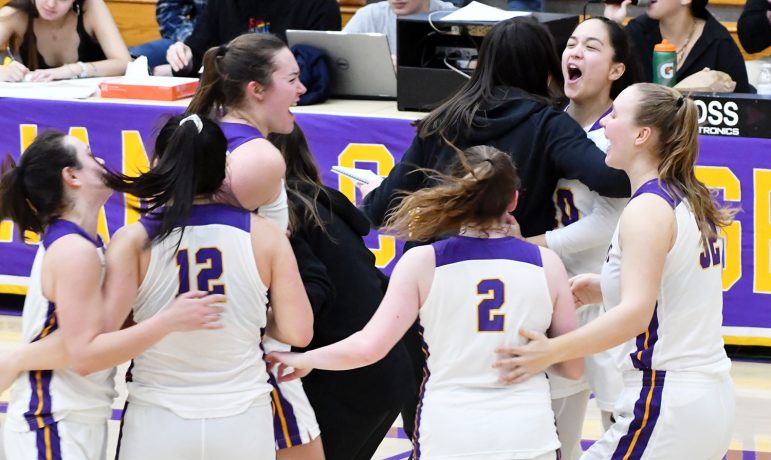 Women’s basketball celebrates its win over Trinity, its first NESCAC tournament win at home since 2015. (Photo courtesy of Sports Information.)

“We had to fight for 40 minutes,” Eph head coach Pat Manning said following the win. “It was a great team effort, and it’s big to be going to the semis against the quality of opponents that we’ve had.”

In their second win over the Bantams this season, the Ephs hit the ground running with a double-digit lead in the first quarter. The women held Trinity’s offense to just eight points in the first quarter and played a strong defensive game throughout. The Ephs didn’t hit a shot outside the paint until just over two minutes remained in the quarter, but forward Maddy Mandyck ’22 kept the women ahead with six points on 3-for-3 shooting. At the end of the quarter, the Ephs scored eight combined points on three possessions, including two 3s by guard Maggie Meehan ’21.

The Ephs threatened to extend their lead even further in the second quarter, but the Bantams closed the quarter with a 6-0 run to narrow the deficit to seven at the half. Meehan, who led the Ephs with 14 points at the half, drilled two more 3s, the second of which put the Ephs up 33-20 with 2:57 to play in the half. The Bantams, however, held the Ephs scoreless for the remaining three minutes, scoring six points of their own to pull within 33-26 as they entered halftime.

The Ephs ended the third quarter with a 5-0 run, extending their lead back to 11. Trinity had managed a 6-0 run of their own to get within six, but Gabby Martin ’21 made a three with 2:00 left, and forward Katie Brule ’20 added two free throws to solidify their strong lead.

The women continued their momentum with a strong start to the fourth quarter. The Ephs extended their lead to as high as 18 points with Brule’s 3-point play. The Bantams followed up with a 15-4 run to narrow the deficit to seven, but could not score again throughout the rest of the quarter.

Brule scored 15 of her 17 points in the second half, leading the Ephs to their first home NESCAC win since 2015. In addition to Meehan and Brule, Mandyck played all 40 minutes of the game  and notched a double-double with 12 points and 13 rebounds.

Despite losing forward Emily Peckham ’20 to a season-ending injury, the Ephs have fought through a tough season. “We’ve had adversity—we lost [Peckham] early and yet, this team stays so focused and takes it one game at a time,” Manning said. “We’ve been playing good basketball for the past three or four weeks, and we’re only starting to pull it together.”

The women will take on the undefeated Jumbos in the NESCAC semi-finals next Saturday at 12 p.m.