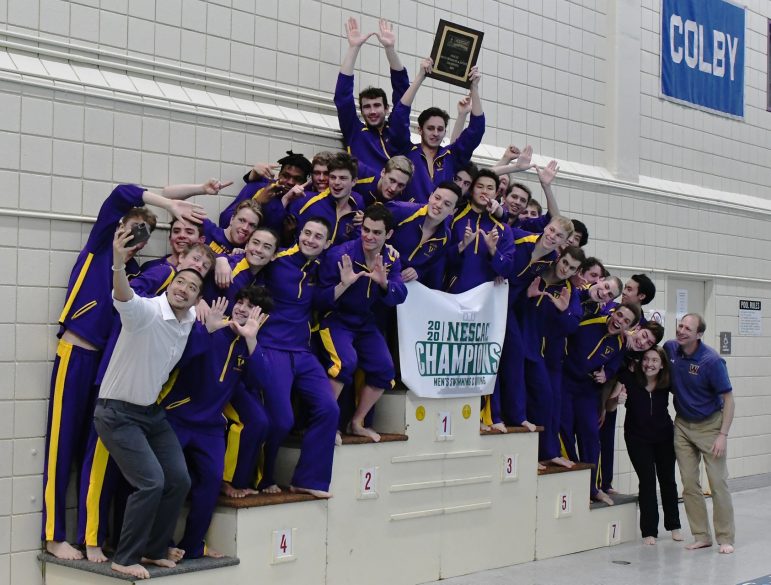 Men’s swimming and diving finished the weekend with 1,987.5 points, putting them ahead of Tufts with 1,797.5 and Amherst with 1,386.5. (Photo courtesy of Sports Information.)

Last weekend, men’s swimming and diving won its 18th NESCAC Championship in 20 years, finishing with 1,987.5 points.  The men, who served as this year’s hosts, were followed by Tufts in second place with a score of 1,797.5 and Amherst in third with 1,386.5.

“I’m very proud of the entire team,” head coach Steve Kuster said. “It wasn’t a perfect meet, but we have an outstanding team who competed exceptionally well together and for each other this weekend.”

The NESCAC Championship opened with the 800 freestyle relay. The College’s ‘B’ relay comprised Andrew Trunsky ’20, Richard Nichol ’23, Jack Marquardt ’23 and Will Burford ’20. The relay began with Trunsky, followed by Nichol, who had the fastest swim of the relay at 1:39.79. The Ephs finished strong, winning the ‘B’ heat.

On Day Two, the Ephs broke two other pool records, won six out of the nine events and ended almost 90 points ahead of the competition.

The day started with Pearcy, Lovette, Will Zhang ’22 and Aaron Stanton ’22 placing second overall in the 200 freestyle relay. In the first individual event of the meet, Sam Gollob ’22 placed second in 26.29 and Liam Sullivan ’23 topped the podium with a time of 24.96.

In the ‘B’ final of the 50 butterfly, Zeb Hart ’22 won the consolation final, Ev Nichol ’23 tied for second and Pearcy won the event. In the championship final for the 500 freestyle, distance trio Lovette, Jackson Karofsky ’21 and Trunsky swept first, second and third, respectively. Lovette commandeered the lead from early on, finishing the race with a Samuelson-Muir pool record of 4:29.27.

Nick Whitcomb ’22 out-touched the competition by .03 in the 50 backstroke, marking the fourth individual win of the day for the Ephs.

The Ephs’ 400 medley relay comprised Leclerc, Sullivan, Pearcy and Lovette. Leclerc began the race with a 49.87 backstroke split. Sullivan, fresh off of his 50 breaststroke win earlier in the evening, had an impressive split of 53.78, the fastest in the field by over a second. The Ephs set another pool record with a cumulative time of 3:15.36.

“I liked the way we battled tonight,” Kuster said afterwards. “Obviously some great performances, but also some important gritty swims where guys moved up in their heat and got us more points. That is obviously going to be critical in what will be a very close meet.”

The men continued their stampede on the third day, winning five of the seven events and situating themselves almost 200 points ahead of the competition.

Day Three began with the 200 medley relay. Whitcomb, Sullivan, Hart and Stanton placed second overall in a time of 1:28.74. The Ephs went .01 faster than their swim from Thursday night.

In the 400 individual medley, Sean Tan ’22 captured his first NESCAC title with a time of 4:00.78. The next individual win came from Pearcy in the 100 butterfly, beating the competition by almost a full second. Continuing the streak, Lovette won the 200 freestyle in 1:38.13.

In the championship final for the 100 breaststroke, the Ephs snatched four of the top eight spots, with Sullivan claiming another conference title with a time of 54.40. Grover finished a close second at 54.58.

The final event of the day was the 100 backstroke. In the championship final, Whitcomb, following his 50 backstroke championship win, held his first place seed and won with a time of 48.64.

In the championship final for the breaststroke, the Ephs put up three of the top five. In fourth place and in his last collegiate swim, Clayton Morikawa ’20 finished in 2:04.01, achieving a new personal best.

In the 200 butterfly, Pearcy and Delcompare battled for first place. While Pearcy had a great third 50, Delcompare ultimately won another 200 butterfly title with a time of 1:48.60.

In the 3-meter diving final, Tray moved up from ranked third to second overall by scoring multiple sevens. In the 400 freestyle relay, the final event of the meet, Pearcy led the men with a strong spit of 45.91. Karofsky, despite competing in the exhausting mile earlier in the day, swam a quick split of 46.60, with Stanton following. Finally, Lovette split 1.3 seconds faster than his individual race with a time of 43.65, the second fastest split of the heat. The Ephs finished with a total time of 3:00.59.

Trunsky, who totaled 341 points at the NESCAC Championships during his four-year career, also won the NESCAC 4-Year High Point Swimmer Award. Trunsky is the 13th Eph to earn the honor.

Finally, Kuster won NESCAC Swimming Coach of the Year for the second year in a row and the eighth time in his 21-year career at the College.

The Ephs continue their season next weekend as Tray competes at diving regionals.