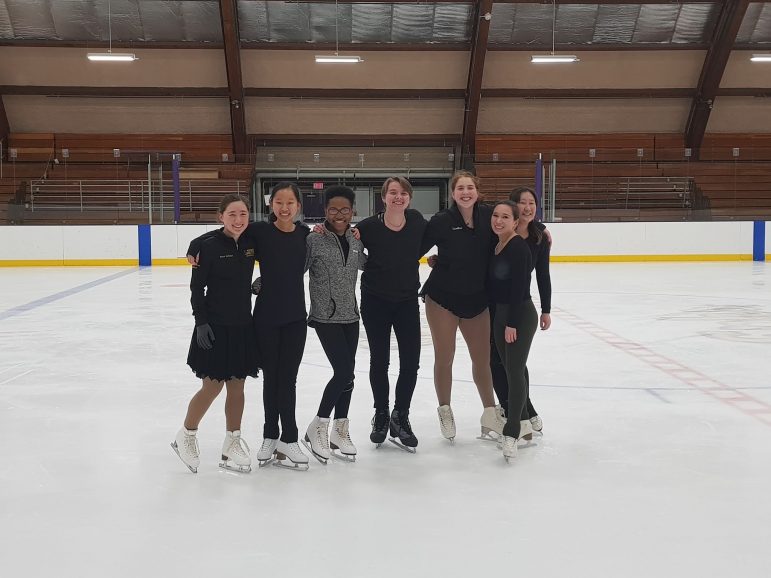 STEPHANIE TENG/ THE WILLIAMS RECORD The members of the Figure Skating Club pose for a photo after successfully hosting their annual ice show in Chapman Rink.

At 7:25 p.m. on Saturday night, 30 minutes before the start of the Figure Skating Club’s annual ice show, a group of us stood on the boards, watching Maya Huffman ’22 and Jenny Yu ’23 dance across the ice in a synchronized, carefully practiced pattern. They were mesmerizing and impressive, especially considering that they had not practiced this routine together before. As they finished their laps and came gliding back to the group, Caroline Broude ’23 encouraged them to perform the routine in our annual ice show.

Although the club is open to everyone, many of our other skaters have spent years training in figure skating before coming to the College. Huffman and Yu are no exception. Their skating pattern, known as the Rocker Foxtrot, is a well-practiced routine by those trained in ice dance. The ice show originally had four acts: a group program featuring all the figure skaters in the club, two single programs and a doubles program featuring our two captains, Claire Shao ’22 and Huffman. We welcomed Huffman and Yu’s routine, however, as a last-minute finale.

The theme this year was “Broadway on Ice.” The audience saw Broude skating to Hamilton, Yu and Huffman to Moulin Rouge, Emily Bleiberg ’22 to Rihanna (not a Broadway composition but an absolutely beautiful program nonetheless), Yu and Huffman to Moulin Rouge again and everyone, including J’nai Blake ’22 and myself, opening the show to Pippin. It was a short but purposeful show. The seven of us had a lot of fun and, judging by the cheers, the audience did too.

At each practice leading up to the show, many of the skaters practiced their old programs and made new ones. As one of the members who had no previous skating experience, I was practicing a lunge over and over again so that I wouldn’t fall over during the show. Back in November, it felt incredibly intimidating to walk into the rink and see practiced skaters gliding gracefully across the ice using skills they had spent years honing.

Indeed, in November, I was barely standing upright while slowly making my way around the rink in College-provided skates. Thanks to the guidance of the team, it didn’t take long for me to become comfortable both on the ice and around the other members. During ice time, we trade tips and tricks, try new elements, laugh it off if someone ends up on the ice and take our minds off of the rest of the world for a little bit while doing the sport that we love.

“Broadway on Ice” was just as good a showcase as in previous years, but it was somewhat smaller. In the future, we hope to expand the show and share this experience with more members. Who knows? Maybe next year, you’ll be the one to add an act to the show and skate alongside the College’s little-known but talented team of figure skaters.

Carolyn Jordan ’23 is a member of the figure skating club.