This nonner is a goner: a day on the College’s wrestling team 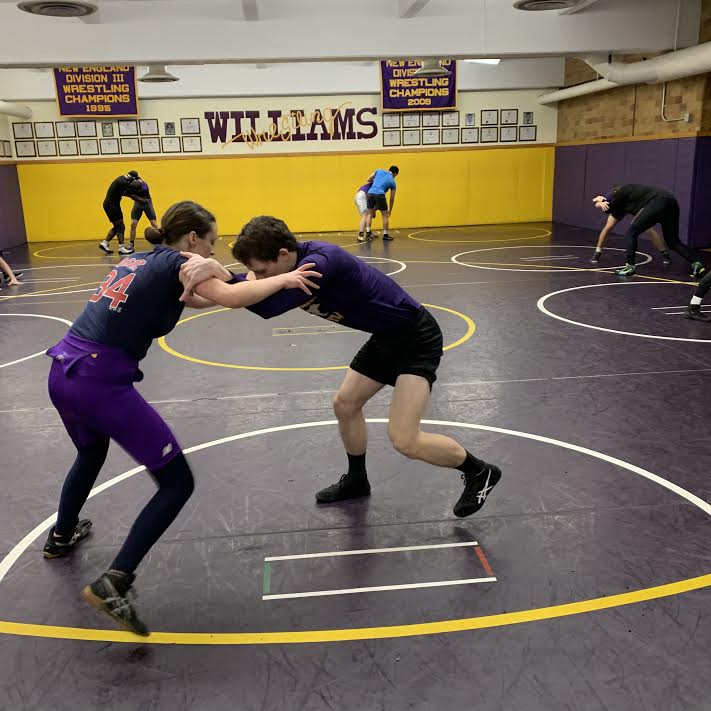 Sofie Jones ’22 (nonner) becomes a goner as she wrestles against a member of the College’s wrestling team during a practice session. Sofie Jones/The Williams Record

In the past year, conversations about the division between athletes and non-athletes have skyrocketed on campus following the publication of a series of op-eds in the Record and a Williams Forum meeting that focused on athletic recruitment. Despite its constant presence at the College, athletic team culture remains an enigma that eludes many who are not part of it. In hopes of better understanding the one-third of student body who actually know what goes on at “lift,” I decided to see if I, an unathletically-inclined Record editor, could walk a day in an athlete’s sweat-soaked shoes. In the words of NARP hero Captain James T. Kirk of Star Trek, I was determined “to boldly go where no [nonner] has gone before.”

If I was going to live the athlete life, I knew I needed to go big or go home. Hence, I decided to take on the sport I understand least: wrestling. After somehow convincing head coach Scott Honecker to let me join in on a team practice, I prepared myself to face the Eph wrestling team head-on.

Once classes ended last Monday afternoon, I threw on workout clothes and headed over to the maze that is Lasell. When I walked into Honecker’s office, admittedly a couple minutes later than our pre-established meeting time, Honecker raised his voice to inform that, as a wrestler, my lateness would not be tolerated. He then presented me with a waiver, declaring that I, “acknowledge that participating in wrestling practice is a horrible idea and likely will result in exhaustion or injury.” It also stipulated that I would not find anyone affiliated with the team liable for any “discomfort” that followed.

I also pulled one of the Ephs’ signature singlets on over my clothes and, honestly, felt like a real student-athlete. The first real wave of embarrassment did not hit until I entered the practice room and realized that no one else was donning the terribly unflattering uniform. My NARP-ness became even more obvious when Honecker called me out for bringing a notebook and pen to take notes on the practice.

Despite my initial blunders, the other wrestlers welcomed me and seemed only slightly confused by my presence. Still shaken from Honecker’s reprimands, I asked one of the wrestlers whether they found the team atmosphere too intense or intimidating. “You’ll get used to it,” he replied with a smile. In any other situation, I would have taken this as a good sign. Here, however, I felt the immediate urge to flee while yelling out that I never—and I mean never—wanted to get used to it.

After everyone else arrived, we started off with a cardio workout that involved running around the practice room in circles. Despite my weak legs and asthmatic lungs, I managed to keep up at a good pace. When the men started to do flips and stretches mid-sprint, however, I could not possibly keep up. Thankfully, assistant coach Tom Foote ’13 showed pity and helped me navigate the minefield. I admit that I had to take a break halfway through to get in a couple puffs of my trusty ProAir, but otherwise, I survived the warm-up with no more emotional or physical injuries.

Next, it was time to learn some wrestling technique. Honecker called over a team member, whose injury prevented him from participation, to give me some pointers. We started with finding my starting position and stance. Things escalated fast, and soon I was tackled to the ground over and over again with full force. After enduring ten minutes of physical pain, I learned some advanced moves: how to pin my opponent to the ground, for example, or put them in a headlock. The lack of personal space struck instantly, and awkwardness came over me despite fully understanding that it was part of the sport. Ten minutes ago, my opponent and I were strangers; now, his face was millimeters away from my armpit. I felt like a star in a women’s deodorant commercial and silently prayed that my Secret Outlast would perform as well as advertised.

Though the wrestlers held back their full wrath, both my body and my ego were pummeled by the end of the practice. At one point, I told Honecker it was too hard and I was too feeble to continue. Honecker sternly ordered me to keep going rather than sit on the sidelines.

The seven-minute sprinting exercise that followed was what really decimated me, leaving my body splayed out of the mat by minute four. After taking a quick breather, though, I managed to get myself up and finish the drill at a slow but steady pace.

I cannot describe the relief I felt when Honecker announced that practice was done for the day. Emergen-C packets were distributed to keep our immune systems healthy, quick announcements were made and we ended the afternoon with a team huddle and cheer. I spent a few minutes debriefing the afternoon with Foote and some team members to talk about how intense collegiate athletics are. Although they joked that they’d see me at their lift session the next morning, it was clear to us all that I was not cut out for a career in intense physical fighting. I then took off my singlet, said my goodbyes to the team, and exited Lasell, leaving my brief but painful career as an Eph wrestler behind for good. I breathed in the cold air and headed towards a math TA session, relieved to be a nonner once again.