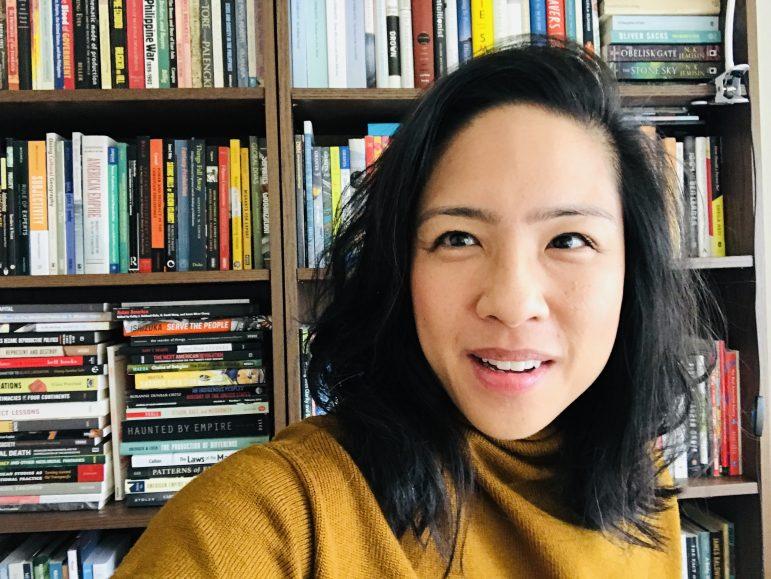 PHOTO COURTESY OF JAN PADIOS. Jan Padios will be joining the faculty in the 2020-2021 school year as a tenured American studies professor.

The College began the search process to hire a new American studies professor in the fall of 2019. The position is one of two tenure-line hires in AAS approved by the Committee on Appointments and Promotions (CAP) in February 2019, following a Curricular Planning Committee (CPC) working group’s recommendation that same month.

The hiring marks a significant step taken by the College towards the AAS program after over 30 years of activism, including protests at past Previews and graduation, as well as a photo campaign in 2018. To date, AAS at the College has been largely scattered across courses in several departments, including American studies, history, English and women’s, gender and sexuality studies.

Throughout the fall semester, the search committee received and evaluated materials from 45 candidates before scheduling Skype interviews with about a dozen applicants. After the Skype interviews, four finalists were invited for on-campus interviews in mid-November.

Dorothy Wang, professor of American studies and head of the search committee,  expressed surprise at the number of applicants. “Because it’s a senior, tenured [position] in the social sciences, we expected about two dozen people to apply, and we actually got … almost double what we thought,” she said. She also noted the fact that Padios currently teaches at a Ph.D.-granting university in a metropolitan area, “so it was really great that we were able to hire her.”

Though no students were official members of the search committee, many played a role in evaluating candidates when they came to campus to present teaching sessions. Students from American studies classes and other Asian American students who had been involved in the AAS movement were able to act as the students in candidates’ mock classes. Many wrote responses to and evaluations of the candidates’ teaching and sent them to the committee, which took student input into consideration.

Suiyi Tang ’20, a Minority Coalition co-chair and active member of the AAS movement, attended Padios’ teaching demonstration and subsequent lunch hosted by the American studies department in the fall. “Prof. Padios’ appointment is a tremendously important step in the establishment [of] AAS,” Tang said. However, she also pointed to larger questions at hand. “As many know, there is an egregiously low retention rate for faculty (and staff) of color at the College. If the faculty and administration are serious about their commitment to establishing AAS, they must also make a concerted effort to make the campus professionally and personally hospitable to its [faculty] members of color.”

According to the strategic planning working group on faculty and staff development,  turnover among faculty of color has been higher than that of white faculty (10% vs. 3.7%) in the past five years. However, the report also indicated that the retention rate for faculty cohorts entering since fall 1990 has been lower among white faculty than faculty of color.

Gina Chung ’12 was involved with the campaign for an Asian American studies department during her time at the College and has kept in touch with Wang, from whom she received news about the hiring. “I’m very pleased as an alum to see that the College is taking these steps,” Chung said. “I think a lot of people would probably agree with me in that this is long overdue… The fact that students have continued to organize around this and to be persistent has been really inspiring to me.”

The position was initially offered to another candidate, which Wang said Padios is aware of. “What we had wanted was to make a double hire because there’s such a need at Williams for Asian Americanists,” Wang said. “But we were told by the CAP that we could only hire one. We liked both of the candidates equally, so we ended up offering the job initially to the more senior person who had more administrative experience.” The offer was extended to Padios on Jan. 20, after which she made a second visit to campus on Claiming Williams Day and into the following weekend.

“My impression of Williams students is that they are very curious, creative and serious about their intellectual growth,” Padios said. “The 30-year struggle for an Asian American studies unit on campus also tells me that the students are willing to push for what they need from the institution and their education. I truly admire that.” Padios also described her respect for the dedication of the faculty. “It’s very exciting, and I am looking forward to being part of this kind of environment.”

At the University of Maryland, Padios is currently a tenured associate professor of American studies, the department’s director of graduate studies and an affiliate faculty member in women’s studies and the Asian American studies program. She is also a writer of creative nonfiction, essays and poems about “family, trauma and mental illness,” she said. “I see myself as contributing to the College by expressing all of these parts of myself through teaching, collaboration, and conversation,” she added.

At the core of her work is a historical and anti-colonial analysis of the Philippines and Filipino people, particularly in relation to the U.S. “This is how I became a scholar of Asian American studies, a field to which I am very dedicated, and one of the reasons I decided to join the faculty at Williams College,” Padios explained.

Wang expressed excitement at Padios accepting the position. “She fits perfectly because she can teach American studies classes but is also in anthropology, an ethnographer by training,” Wang said. “She’s a good teacher, as we witnessed with the students. Also, for me personally, I wanted to diversify the kinds of Asian Americanists we were bringing in.” Padios will be among the first Filipina-American faculty members at the College, according to Wang.

As the daughter of Filipino immigrants and the first in her family (along with her sister) to attend college in the U.S., Padios said she experienced struggles with anxiety, identity and her political voice. “So much of this past is still alive for me and shapes my teaching, mentorship and advising,” Padios said. “I share this not because I want to present myself as a ‘success’ — a word with a complicated relationship to Asian Americans — but so students with stories like mine know that they are not alone in their struggles, and that students in general know that I see self-knowledge, grounded in historical inquiry and social/political critique, as vital to the freedom and wholeness of ourselves and our communities.”

President Maud S. Mandel responded to the news in an emailed statement to the Record. “I was so pleased to learn that Professor Padios will be joining the Williams faculty,” Mandel said. “Recently awarded the Asian American Studies Association’s Outstanding Achievement Award in the social sciences for her book, A Nation on the Line, Professor Padios is clearly an extraordinary scholar and educator. She will build on the strengths of the American studies department while also adding wonderful new areas of specialization. I look forward to getting to know her and to working with her and other colleagues on the development of Asian American studies at Williams.”

Buell also conveyed her excitement, stating, “I am thrilled that Jan Padios will be joining the Williams faculty. She is an accomplished scholar and teacher who will bring expertise in thinking transnationally about American and Asian American studies to complement the contributions made by faculty members already here on campus.”

Looking ahead, the religion department will be hiring a junior professor in Asian American religions next year, for which a search committee has yet to be assembled. Once the hiring process is complete, all the faculty members teaching in the AAS field will have a discussion regarding whether AAS should become a free-standing program like Africana studies and Latino/a studies or remain a part of the American studies department.

Tang agreed with Wang, stating, “In the longer term, the goal is not only for the establishment of a fully-formed AAS program, but for Williams to house a full ethnic studies department.”

She also had other concrete suggestions for next steps. “We need to continue the hiring trend,” she said, “bringing in one or two more tenure and tenure-track professors with at least 0.5 FTEs [full-time equivalents] dedicated to AAS in the next three years, supplemented by three-year visiting positions.”

Tang also implored students continue to hold the College accountable. “We must make sure that the College’s commitment does not fade after Prof. Padio’s hire and that AAS will grow into its autonomy — not to be confused by, or assimilated into Asian studies, for instance,” Tang said. “We have always maintained that Asian American studies, as an ethnic studies program founded through the 1960’s Black-led, anti-war movement at S.F. State, must maintain its integrity as an interdisciplinary department unto itself.”