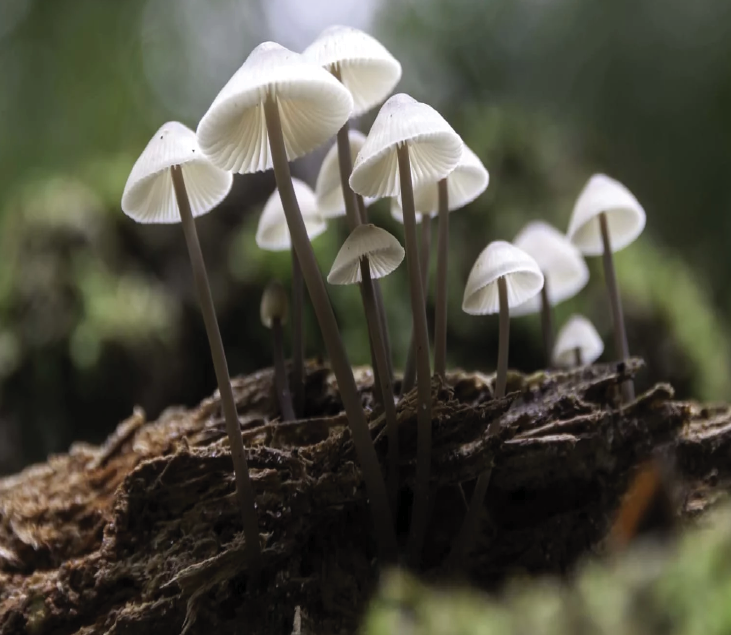 “Fantastic Fungi” explores how mushrooms grow and are harvested, revealing knowledge about the fungi. (Photo courtesy of Getty Images).

Katya King, Director of Fellowships at the College, grew up foraging for mushrooms in what was then Czechoslovakia. The activity followed Katya’s familial lineage – her grandfather taught her mushroomer lessons, a skillset she practiced often as a child but lost touch with in the U.S. In South Hadley, MA., where King lives, she’s fostered a new relationship with mushrooms, one that’s encouraged her to reflect upon her past and grow her understanding of the expansive study of mushrooms. She now considers herself an amateur mycologist – an expert on mushrooms.

On Friday evening, I had the chance to watch a 2019 documentary by Louie Schwartzberg at Images with King, “Fantastic Fungi”. A documentary unlike any I have seen, “Fantastic Fungi” follows a timeline stretching over one billion years, flying between geological time, from the distant past, to the present and to the past again, to demonstrate the evolution of mushrooms, their mystical properties, ingenious design and the infinitesimal possibilities they present.

Narrated by Brie Larson, who voices the mushrooms, the documentary follows an assortment of mycologists, physicians, lab scientists, clinical trial patients and pioneering individuals in the research and study of mushrooms. It paints a holistic image of the potentiality fungi represents in its myriad  forms: medicinal compounds, antibiotics, pest control, fermentation and more.

While it follows a host of crucial individuals, Paul Stamets, mycologist and author, steals the show. He retells his initiation story into the magic of mushrooms, which began with a friend’s father burning his copy of Altered States of Consciousness, a book by Charles T. Tart, a seminal figure in the field of transpersonal psychology – folding the transcendental of human lives into a psychology lexicon. This otherwise rage-inducing event actually encouraged Stamets, as he knew something with the power to compel someone to burn another’s possession was too great to not explore. Stamets is the enthusiastic face of “Fantastic Fungi”, giving a personality to the scientific background and providing anecdotes that complement them.

“Fantastic Fungi” introduces the audience to dozens of mushrooms, categorization methods and foraging processes. But the film also leaves ample room for the less concrete aspects of their biology, the ambiguousness of their powers and the mind-blowing extensiveness of their  mycelium, which serve as an infrastructure that allow for fungi to exchange nutrients, communicate and create harmony among the natural world. Its trajectory assumes skepticism, rather than predicting an audience full of mycologists.

And, in this trajectory which evokes a progressively increasing awe of the resilience, intelligence and mysteriousness of mushrooms, it eventually reaches where we knew it would – psychedelics. However, it takes nearly half the film to center itself on psilocybin-containing mushrooms, or the infamously termed “magic mushrooms.”  Despite a rediscovered modern interest in “shrooms” and their spiritual benefits, they still remain a taboo for many. King, however, while perhaps not interested in their psychedelic usages, is fascinated by the contemporary dialogue around the benefits of mushrooms.

“I forage to eat, essentially, mushrooms. And that’s how I grew up. But I’ve realized recently that a lot of people look for mushrooms for other reasons – medicinal or psychedelic reasons, for mind expansion, and that’s really fun to learn about…” King said. “It’s demonized still, but maybe with cannabis becoming legal, it’s the next frontier.”

“Fantastic Fungi” certainly advocates for “shrooms” as the next frontier. That being said, it doesn’t focus on the recreational usage of psilocybin but instead on the therapeutic and medicinal benefits. The documentary draws upon multiple studies, clinical trials and scientific qualities of mushrooms to portray their ability to expand human consciousness, lessen one’s fear of death and create a deeper connection between humans and the natural world.

For instance, the documentary mentions Lion’s Mane (Hericium erinaceus), which has proven in experiments with mice to prevent memory loss and can potentially prevent neural damage, making it a potential treatment for Alzheimer’s disease. Psilocybin research hit a peak in the late 1960s, so why have these benefits of mushrooms not been harvested? “Fantastic Fungi”  answers this question in a turn toward politics and policy. Like the dawn of mass incarceration and rampant increase in the criminalization of marijuana possession, mushroom research was stunted by President Richard Nixon’s “War on Drugs” and did not recover its footing until the late 1990s.

Growing up, King saw mushrooms’ abilities to unify peoples manifest itself in daily interactions, chance encounters and the connectivity between Slavic states. “What unites the Slavs, and in particular the Northern Slavs (i.e. Russians, Poles, Belorussians, Ukrainians, Czechs and Slovaks),” King wrote in What’s in a Basket of Boletes?, an essay about her relationship with mushrooms, “are their closely related languages and certain ancient cultural traits. One such trait is their love of mushrooms.”

King describes an interaction she had after a particularly bountiful foraging of mushrooms. “A woman whom I’ve seen regularly on the path for years introduces herself,” King wrote. “Her parents were Russian prisoners of war who met in a prison camp in Austria. They too picked mushrooms.”

“Fantastic Fungi”, above all, offers hope in the midst of looming disaster. It stages fungi as an antidote to climate change, with its abilities to clean water, mediate pollution and generate regrowth. After leaving “Fantastic Fungi”, one may create a new definition for mushrooms – not one predicated on their associations with death or decomposition, the bitterness of their flavor or their slimy texture, but one about their abilities to heal, co-exist and cater to the needs of life on earth in its myriad forms. And, always remember King’s grandfather’s sage advice if you decide to forage for them, “Leave a few young ones behind to grow to their potential.”