The Clark invites students to special opening of “Arabesque” exhibition 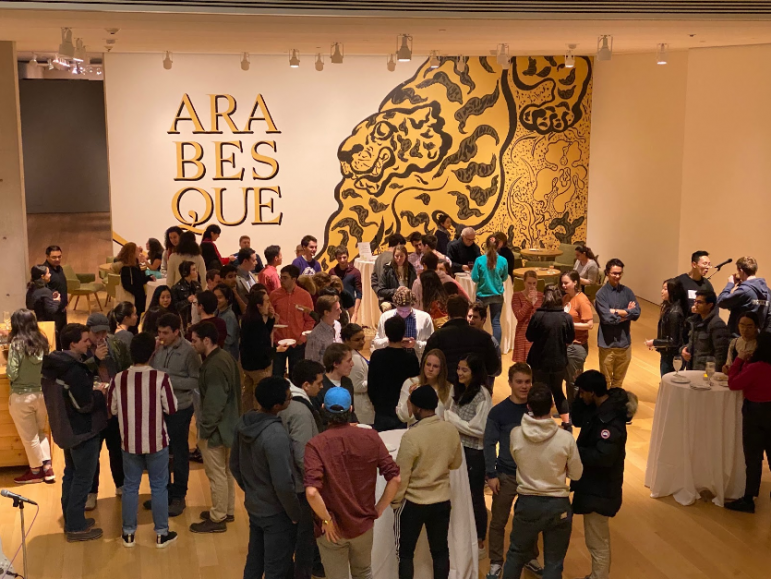 The Clark hosted students on Friday for a special opening of “Arabesque,” an exhibition on orientalist art. Sarah Gantt/The Williams Record

Last Friday, the Clark Art Institute held an exclusive student opening of its “Arabesque” exhibition. This opening demonstrated the strong connections between the Clark and the student body and underscored the unique relationship the two institutions have. The exhibition gave room for students to appreciate art outside of the campus, allowing for a coming together of students interested in art.

Community members and students from the College and Massachusetts College of Liberal Arts filled the Clark’s first level, wandering in and out of the new exhibition, enjoying hors d’oeuvres and dancing to covers performed by a student band, Top Sheet. The night began with opening remarks from the Clark’s director, Olivier Meslay, and exhibition curator, Anne Leonard. Both Meslay and Leonard emphasized how fortunate the Clark is to have students in such close proximity to the museum and explained recent efforts to connect the museum with the College’s students.

The student opening was organized by Ephs at the Clark, a club that facilitates the relationship between the Clark and students. The group’s co-treasurer, Ben Ward ’22, said, “It’s nice to have a place [the Clark] where people can come together that’s just a little bit outside of the college campus.” Several students agreed with Ward that the Clark feels separate from campus because of the scenic walk to get there.

Ward and Tony Santiago, a Clark security guard, were pleased by the turnout and the response the art received from students. Santiago attributes the event’s success to the student involvement and lively music. Ward looks forward to planning next year’s student opening, added that they plan on having a wider variety of food to offer.

The lead singer of Top Sheet, Piper Higgins ’21, said that the beverages and cheese added to her experience. Higgins added that she enjoyed playing at an event that a wide range of community members attended, adding that she appreciated her rowing teammates who attended the event.

Baladine Pierce ’20 immediately noticed the striking contrast between the music and the “Arabesque” exhibit. She described the music as “forceful and energetic,” while the art was “gentle and delicate.” Nevertheless, Pierce said the performance space and the art gallery “definitely felt connected” because the open layout allowed for sound to travel freely.

When asked about her favorite piece in “Arabesque,” Pierce chose “Little Briar Rose,” an 1836 steel etching by Eugene Napoleon Neureuther, because it felt “inviting.” Several students were enthusiastic about the 1880 “Mosque Lamp” by Philippe-Joseph Brocard because of the way light illuminated the gilded glass, also stating that they appreciated the variety of pieces from different cultures and time periods in “Arabesque.”

The exhibition will remain on display until March 22, calling to museum goers to step out of their comfort zone and interpret arabesque as a symbol of unrivaled imaginative freedom.