Graduate students at the College study economics and art history 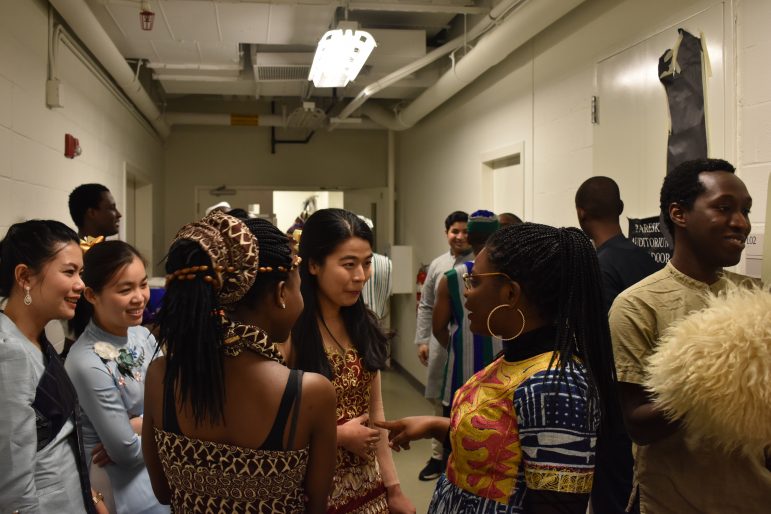 VINCENT JIANG/THE WILLIAMS RECORDCDE students, who earn a master’s degree in a yearlong program, gather and mingle with each other before their intercultural performances.

Economics and art history are popular majors at the College — economics is the most common major, and the “Williams Art Mafia” is so prominent that it sparked a New York Times article in 2004 — but the graduate programs in these subjects are not as well known among the undergrad population.

The Center for Development Economics (CDE) lies on the western edge of campus, across from Wood House. It hosts a one-year master’s program that aims to bring together young leaders from all over the world, a global focus that sets this graduate program apart from those at larger institutions.

The CDE offers a way for economists from different walks of life to learn about the economic issues and approaches unique to each country. “It is a good forum for me to learn different countries’ perspectives and their application of policy,” said Fadindra Acharya, a student in the CDE program.

This year’s class is made up of 27 students from 21 different countries. Most, though not all, are government officials in their home countries.

During the first semester, most of the classes aim to standardize students’ knowledge of economic theories. Graduate students are able to specialize more during the second semester and have the option of taking undergraduate classes, something that some students embrace.

“Sometimes I wish I got more time so I can take other classes inside Williams,” Tassha Rivera, a student in the CDE program, said.

Though graduate students in Williamstown might find themselves in an unfamiliar world, they are often able to form connections to the College and community at large. Some graduate students have host families, who serve as a connection to the larger college community. Many students in the CDE program also eat in the dining halls, where they can interact with the undergraduates.

“Life can get really hard,” Melissa Juisi Simo, a CDE student, said. “You’re in a new place, a new environment. The course loads are heavy… [But] because we are having all of these things done together at the same time, it makes you feel like you have a family away from home, and that is amazing.”

Further down the street at the Clark Art Institute is the Graduate Program in the History of Art, a two-year master’s program designed to prepare students for careers in art history or doctorate programs.

This graduate program is well known outside of the College, despite having only around 30 people enrolled in the program at any time.

“Williams has an exceptional art history grad program,” said Mallory Cohen, a student in the program. “Most people who study art history in some capacity would be familiar with the program.”

The majority of classes are held as seminars in the library of the Clark, and students have the option of taking undergraduate classes as well, which is their primary way of engaging with undergraduate students at the College.

For the most part, though, they remain distant from campus life. “Being further out, even though it’s still pretty close, it’s a big psychological difference being over by the Clark especially when it’s really cold out,” said John Damstra, a student in the art program.

But what they lack in engagement with campus life, they make up for in the community they have built for themselves.

“We have our own parties and do stuff together on weekends and after class,” Cohen said. “There’s so much vitality to undergraduate life…[but] I don’t find that I miss that… I’m completely content being with a small group of people and doing our own thing.”

“It’s nice to have a small community, because then you get to know each other really well, and we all really care about each other and want to see each other succeed,” said Sinclair Spratley, a student in the art program.

Members from both programs noted that the age difference may also contribute to the distance between themselves and undergraduate students. “It is an interesting in-betweenness,” Simo said. “You’re not an undergraduate student, but you’re also not faculty or a part of the administration.”

For the most part, the graduate students stay within their respective programs. But from time to time, students from the two programs do get together.

“It’s true that because of the nature of our programs, we don’t interact a lot, but for Halloween we got together — we had a party together,” Simo said. “Their program is … not like ours, but we found common ground anyway.”