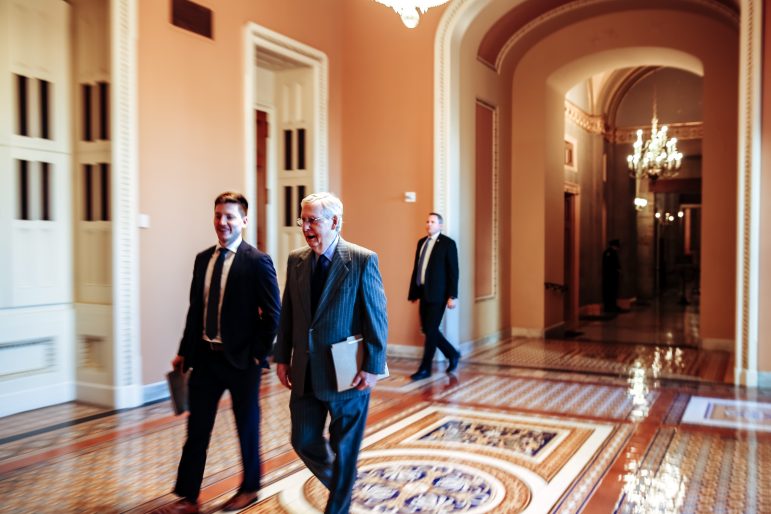 PHOTO COURTESY OF ANDREW QUINN.Andrew Quinn ’13 has worked with U.S. Senate Majority Leader Mitch McConnell as a speechwriter for the past two years.

Andrew Quinn ’13 did not plan on becoming a speechwriter to one of the country’s most powerful and controversial politicians when he graduated from the College seven years ago with a degree in political science.

But today, he works for U.S. Senate Majority Leader Mitch McConnell (R-Ky.) as chief speechwriter and strategic communications director. He leads the team that produces McConnell’s prepared speeches, op-eds and written press statements. He also provides strategic and editorial guidance in other areas, like social media.

While at the College, Quinn was politically involved with the Garfield Republican Club, and he helped start a chapter of the Alexander Hamilton Society, which aimed to advocate center-right to conservative foreign policy on campus by having professors travel around the country for debates.

He cited his experience at the Williams-Exeter Programme at Oxford and the College’s political science department as major influences on his career, noting that he is “a huge fan and hugely influenced by Justin Crowe, Jim Mahon, James McAllister, Cheryl Shanks and Susan Dunn.”

“I really enjoyed and admire all of them,” he said.

Quinn’s career path did not begin on Capitol Hill. After graduation, he spent almost five years at a non-profit think tank working for the president of the American Enterprise Institute (AEI), Arthur Brooks.

“It was really good training in being an intellectual … apprentice to an important public figure,” Quinn said.

In 2017, Quinn started working at his current job.

“I didn’t have prior experience on Capitol Hill, but around the time that I was thinking about starting to move on from AEI, Senator McConnell needed a chief speechwriter, and they were having trouble finding candidates, I guess, and so they expanded their search to outside Capitol Hill,” he said. “And they found their way to me, and I found my way to them.”

Speechwriting for the Senate majority leader has Quinn working around the clock. Leader McConnell and Senate Minority Leader Chuck Schumer (D-N.Y.) are the only two senators who make public statements every day that the Senate is in session, giving 10-minute remarks at the beginning of each Senate session.

“In terms of the day-to-day life … writing for one of the two Senate Leaders … tends to be a little bit of a different animal than speechwriting for most other members of Congress,” Quinn said. He likened his job to the work of a daily publication.

“My first few months were definitely a little bit overwhelming as I was adapting to the pace, but once you’re in the flow of it and all your colleagues are working in the same flow, you get up to speed pretty quickly,” he said.

Despite the job’s intensity, Quinn said he enjoys the payoff. “It is definitely a slightly surreal experience to finish working on something, hit print and see those words spoken live on national television just a few minutes later,” Quinn said.

Quinn explained that his job is to articulate the decisions of his boss, and not to insert his own beliefs into his writing.

“In speeches filled with technical policy details, I am paid to help communicate the message, and so … I will not be able to change key phrases or key positions just from the kind of rhetoric and communications perspective,” he said. “In a more technical situation like that, more of the content would be inflexible, and it would be my job to create as much art and music as possible within those relatively confined constraints.”

He emphasized, however, that it is important for him to agree with his boss on the most fundamental issues.

“I think that, what you do is you find leaders [where] you respect their approach and their leadership and character and who reflect your own personal beliefs and motivations on the issues that are most important to you,” he said. “And then… on a downstream policy issue or on something that’s not your No. 1 personal priority, if your instincts are in a different direction than the boss’s, you always remember whose name is on the door, and that your job is to serve them and help them articulate their vision.”

Quinn said that he relies on the dedicated fact-checkers and research team who polish his writing.

“People often think failure or backlash can be highly personalized to a speechwriter, in a sense where I would make an enormous blunder by accident and it would totally blow up in everyone’s face,” he said. “But nothing like that has ever happened to me, thanks in large part to the somewhat exhaustive review process and fact-checking process that I’m able to loop a lot of colleagues into. If I had ever written something that was not an accurate representation of what my boss said or had a glaring issue in it, if you have a good system that you’ve built around you, that does not make it to the Senate floor.”

Although Quinn enjoys working on the televised speeches that the whole country can hear, he said his favorite speeches to write are more personal tributes and eulogies, both for prominant political figures like late Senator John McCain (R-Ariz.) and for people who were  pillars of Leader McConnell’s community in Kentucky but are not nationally known.

Along with the tributes to McCain and late President George H.W. Bush, Quinn said he is most proud of a eulogy he wrote for one of McConnell’s law school classmates, who was “not nationally famous at all.”

“I had the opportunity to speak to community members, members of that gentleman’s family … to help me inform the process,” he said. “Those are, in these respects, almost more memorable than even the most intense political debates, although both are fascinating for different reasons.”

In the seven years since Quinn’s graduation, his career has taken off in a different direction than he would have imagined.

“My advice would be to get your feet wet through whatever means you can, and don’t worry about your first job or your first several jobs necessarily being a perfect fit,” he said. “[Washington, D.C.] is a city where … there are a ton of people, there’s tons of churn and job movement, and if you arrive in almost any capacity and work hard, try to meet as many people as possible, impress people with your work product and keep your head above the radar for opportunities, it’s a city that’s hungry for talent and skill. The kind of skills that a Williams education helps endow students with are in high demand here, and your work can quickly come to speak for itself.”

He said that not only the skills but also the content of his education at the College have proved useful for him.

“I think that a lot of liberal arts graduates who wind up in Washington might say that the particular content that they study might not be directly used in their day to day lives, but the broader skills like writing and research and critical thinking do transfer,” he said. “[But] whether it is thinking about an impeachment trial of the president, or Supreme Court confirmation, or debates over institutional changes within the Senate, I am referencing things like The Federalist Papers. It does help to have a knowledge of constitutional law that I learned in Professor Crowe’s seminars.”