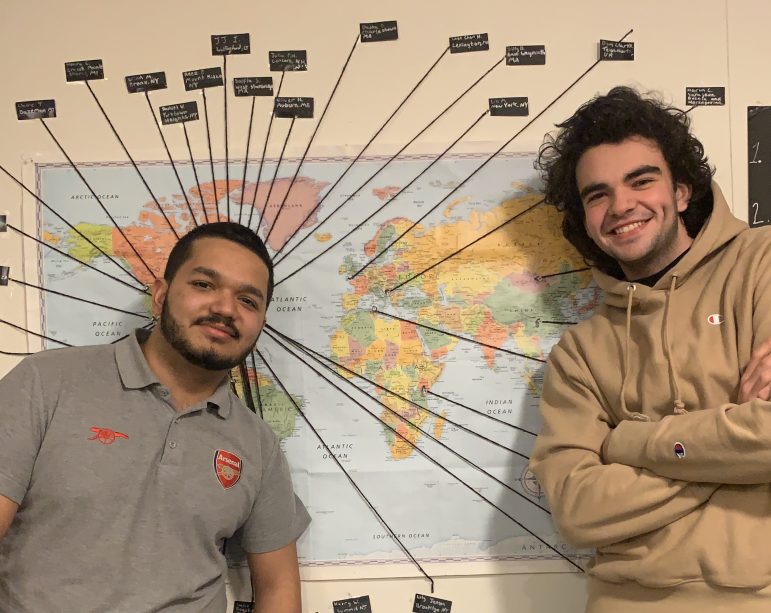 Three weeks ago, Harun Curak ’23 and Onder Kilinc ’23 launched Cultures of Williams, a podcast dedicated to telling the stories of international students on campus.

“I felt like it was going to happen,” Curak said of the pair’s new project. “I just never knew that we were going to be the ones to initiate it.”

Curak, who is from Bosnia and Herzegovina, and Kilinc, who is from the U.K., met during international orientation in the week before First Days. As self-proclaimed extroverts, they already knew of each other when they had a conversation for the first time, and they quickly became friends.

“We sat next to each other on the bus coming back from Walmart,” Kilinc said. “I knew instantly that Harun passed my vibe check.”

During the fall semester, Kilinc joined the board of the Williams International Student Association. It was through being on the board that he discovered many of the challenges facing international students at the College.

“I look at places like Amherst, where not only do they have more internationals, but the school is more suited for them,” he said. “They have need-blind admissions; we have need aware, and international education is more of a thing.”

“I don’t mean that no one cares about us, but our identity is just like, ‘You’re an International,’ whereas I think there’s so much to learn from all the experiences we’ve had,” Kilinc said.

With his understanding of some of the issues facing international students, Kilinc wondered how he could bring them to light. Kilinc said he wanted to have a more permanent record of students’ voices than can be provided through panels.

“In December, I came up with this idea that we should display the cultures of Williams to domestic students, but also to other international students,” Kilinc said. “A podcast came to mind, and I knew Harun would be the best co-host.”

Curak agreed to co-host, and the two planned out the project over the next few weeks. Although neither had ever done a podcast before, both had maintained YouTube channels and were somewhat familiar with the recording and editing process. Soon, they had figured out recurring segments, a list of guests they wanted to interview and the means to record the podcast.

“We have an awesome studio in Sawyer,” Curak said. “All you have to do is book an appointment with one of the staff.”

Curak and Kilinc recorded nine episodes over Winter Study, when they had significant free time, and five more during the week of Winter Carnival. Each episode centers on a different student, who walks the audience through their home country’s food and art. Students frequently discussed their feelings about home and their life on campus.

The hosts tend to use the same questions between episodes, partly to be able to compare responses among guests. They said they intentionally avoid asking questions about experiences most students share, like classes and extracurriculars.

“Our main aim is to culture Williams, and the second is to get people entertained and make them laugh,” Kilinc said. “We wouldn’t be able to fulfill our full aim if we asked, ‘What classes are you taking?’”

Curak said that he and Kilinc designed their recurring questions to let the featured students immerse the audience in their home cultures. They often ask what it would be like to walk down the street in one’s neighborhood, and to describe these sights, sounds and smells. They also ask about items the guests wish they had brought to the College and about misconceptions surrounding their home countries.

“We brainstormed a bit about what we’d like to know,” Curak said. “‘Walking down the street’ is a great one. It contextualizes the place, gives it a nice image. My sister gave me the one about ‘if you wish you had brought something.’ And then there’s ‘The Game.’”

“The Game” refers to the final segment of each episode, in which the hosts typically tell the guest two truths and a lie about the guest’s home country. The guest must then determine which is the lie. A correct answer is cause for celebration; a wrong answer results in “losing your citizenship.”

So far, only two episodes have been released, but the response has largely been positive. One review on the iTunes stores calls the podcast “magnificent” and “extremely well thought-out.” New episodes of Cultures of Williams air Thursdays on Spotify and iTunes.

Curak and Kilinc, who will both be international orientation leaders next year, said they hope that Cultures of Williams will have a positive impact on the international students in the Class of 2024.

“Before they even get here, they’re going to listen to twelve or fourteen episodes,” Kilinc said. “Imagine if we’d had a podcast to listen to where international students were speaking with confidence. They’re going to feel like they have a voice as soon as they arrive.”