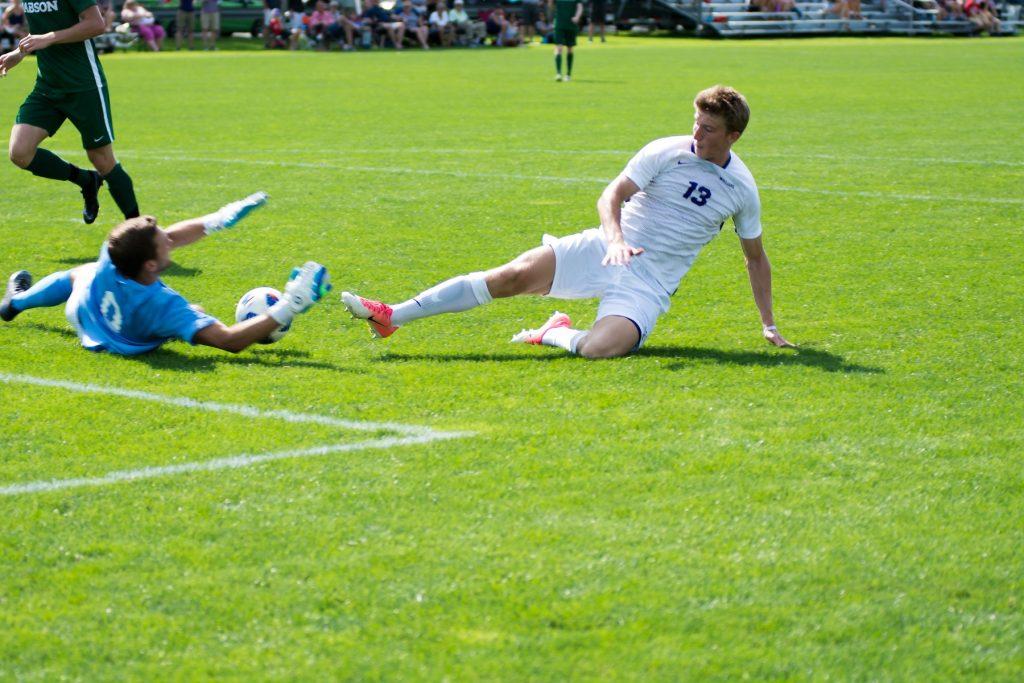 Demian Gass ’20 scored the game-winning goal against Babson during the last seconds of the game. Photo courtesy of Sports Information.

Men’s soccer (2-0-1, 1-0-1 in the NESCAC) hosted two matches at Cole Field over the weekend, emerging with a win against Babson and a double-overtime tie against Colby.

Williams rose to the occasion against Babson, with Demian Gass ’20 scoring the winning goal with just eight seconds to go in regulation, en route to a 2-1 win.

This match was active and filled with foreshadowing right from the start, as an Eli Petrik ’21 cross to Gass was headed just left of the goal in the second minute. Both teams were off to the races from there. Just four minutes later, a corner from Babson midfielder Ross Shellow was deflected by Williams goalie Aaron Schein ’19 right onto the foot of midfielder Mitchell Collins, who slotted it into the net to put Babson on the scoreboard 1-0.

The Beavers were unable to put together a sustained attack for the rest of the half because Gass and the Ephs were dogged in their pursuit of a tying opportunity – an opportunity they would finally convert in the 26th minute. Gass took a free kick from the top left corner of the box, hitting a wall of Beaver defenders. After bouncing around the penalty area momentarily, the ball landed at the feet of defender Sean Dory ’19, who poked it into the top right corner of the net to tie the match at 1-1. The Ephs entered the halftime having tied up the score. The Ephs were not content with a second straight tie, a mindset made evident by their play in the second half.

The men resumed their aggressive style as soon as the second-half whistle blew, winning numerous headers and constantly looking up the field to generate an attack.

This soon resulted in a 52nd minute corner kick from Chris Fleischer ’20 directed towards striker Bobby Fabricant ’20, but in Fabricant’s attempt to head the ball, he collided with Beaver goalie Steven Heintzelman. Fabricant left the game with an injury and would not return.

However, despite losing one of its most proficient attackers, Williams continued to dominate possession and create chances at a prodigious rate. In the 66th minute, the Ephs took two corner kicks, the first being saved by Heintzelman and the second resulting in a fast and high laser from Fleischer, and shots from Nick Boardman ’22 and Petrik both landed wide in the following minutes.

This onslaught continued to build and it began to wear down the Babson defenders. As the final seconds of regulation wound down, the Ephs entered the offensive third of the field again, this time led by defender Jules Oberg ’22. The Babson defense blitzed Oberg, but in their effort to contain the freshman, Oberg noticed Gass streaking by him on the left wing, and played a through ball into the box. Gass took one touch, and roped it past Heintzelman for the game-winner, keeping the Ephs undefeated.

On Saturday, the men survived a full 110-minute marathon contest and picked up a point in a 0-0 draw with the Colby Mules.

Despite scoring five goals in the first match of the season, including four in the first half alone, the Ephs found themselves locked in a defensive struggle with the Mules, especially in the first half. Outstanding play by both back lines saw little forward movement, and whatever offensive progressions each team made would soon be offset by a header, clearance or deflection out of danger. Due in large part to the work of forward Jeff Rosenberg, Colby made several inroads towards the goal in the first 45 minutes, but none gifted any tangible success. Each squad left the pitch at halftime wanting more.

The Eph offense started to pick up early in the second half, as midfielder Petrik came close to scoring on several occasions within the opening minutes, but to no avail. However, in the 54th minute, Colby had its best chance of the day, as forward Wyatt McDonald put his foot on a cross with an open net directly in front of him. However, he took slightly too long to gather himself, enabling Schein to recover and pounce on the ball, denying the Mules a chance at denting the scoreboard. Outside of a desperate cross to Fabricant in the 90th minute, neither team made much offensive noise for the remainder of the half, setting the stage for overtime.

While neither team scored in the extra periods, it was easily the 20 most eventful minutes of the match. In the 94th minute, Gass gained control of the ball right in front of the net, surrounded by defenders, and rocketed the ball high, while in the 95th minute, Colby’s Lucas Pereira’s shot was blocked by a Williams defender just feels away from Schein. Both teams were able to finally take advantage of worn-down defenders and make more runs upfield, but due to various factors, nobody was able to convert.

Colby goalie Dan Carlson recorded five saves in the match while Schein made three saves in recording the clean sheet.

After the match, head coach Erin Sullivan ’96 believed the team played a game it could have won. “We forced some chances during times when we could have been a little more precise, whether that was overpowering a chance or just bad timing on some endline sequences, and I think that’s disappointing,” he said. “We were in good areas, some of the same areas as last week, but playing Colby required some quality that we just didn’t have today.”

On Saturday, the men will travel to Amherst and face their archrivals at 2:30 p.m.