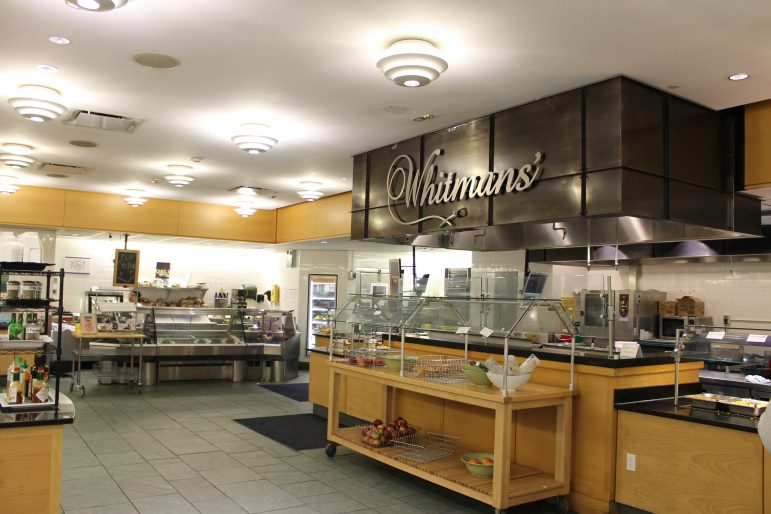 The partial closures of ’82 Grill and Lee Snack Bar over Winter Study were intended to test if dining services could temporarily consolidate menus to allow staff to participate in a new January training program, according to Director of Dining Services Temesgen Araya. On social media, students have expressed concern that the closures may become permanent.

Under a program set to begin in January 2021, one dining hall — either Mission or Driscoll — will temporarily close for Winter Study each year so that each staff unit can spend a week in training sessions on a rotational schedule, Araya told the Record. Araya said he hopes the program will provide opportunities for career advancement, noting that staff have long articulated a desire for more support in developing their culinary skills. The Williams staff committee, which conducted a campus-wide staff survey in 2017, identified expanding professional advancement and training opportunities as a key priority in a presentation last year.

“Training and development was one of the largest pieces of feedback I received from my staff,” said Araya, who added that he invited each of the 120 dining workers to meet one-on-one with him between November and December. “I’ve just been searching and searching for opportunities where I could provide my staff with what they’re asking for.”

During Winter Study, dining services closed lunches at ’82 Grill and moved the Lee After Dark menu to Whitmans’ late night. All full-time Lee After Dark and ’82 lunch staff worked the same hours at a different location, with the exception of one Lee After Dark employee who accepted a temporary daytime shift at Whitmans’, according to Araya. Max Stukalin ’20, however, said that he and at least seven other student employees at ’82 Grill lost hours due to inability to reschedule shifts. All dining halls have since returned to their regularly schedules, and no permanent changes will be made, said Araya, who called the temporary changes “successful from an operational standpoint.”

Several Whitmans’ employees told the Record they are aware of the program and look upon it favorably, but hadn’t received word on when it will start.

According to Araya, fewer students tend to be on campus during Winter Study, causing dining services to serve between 8,000 to 10,000 fewer meals over the month of January. He said he believes reduced swipe counts during Winter Study make it an ideal time to conduct training while still maintaining sufficient service for students.

“There were some rumors floating around, and they were genuinely concerned,” Stukalin said. “They had asked me to talk to people, to do something, to raise some kind of awareness because they didn’t want some kind of radical change or something that was more or less unforeseen happening and not being able to do much about it. After spending four years working alongside dining staff, who are often underappreciated and overworked, it would have been a disservice not to do something.”

Stukalin said he received an email on Jan. 4 from Lisa Champagne, manager of ’82 Grill, informing him of the changes. He was offered shifts at different times but could not find one that accommodated his schedule.

Lee, Whitmans’ and ’82 Grill managers met with workers to discuss the changes in the days leading up to Dec. 18, when all dining operations shut down for winter break, Araya said.

Araya said he takes responsibility for what he believes were shortcomings in communication.

“Communication with our staff definitely could have been better,” he said. “Tweaks and changes scare people, and I understand that. But these tweaks and changes [are] a reaction to what’s [been asked by the majority of] our staff.”

Stukalin attempted to call attention to the changes in a Jan. 11 post in the “Williams Memes for sun-dappled tweens” Facebook page. At press time, 278 people had reacted to the post, and 13 had commented. Stukalin said he had “great” conversations with students and alums after making his post, and he later edited the post to make clarifications and to downplay some rumors.

Christian Lockwood ’20, who chairs the student dining services committee, commented on the post to dispel rumors that a dining location could permanently close, and he offered to answer further questions via email.

Stukalin and Araya later spoke, and both characterized the conversation as productive.

Stukalin said his post was meant to elevate staff and student voices and to “make sure students understand their role in administrative decisions.” Many students may be unaware of many committees’ existence or of how to provide input, leading them to be both uninformed about and inactive in decision-making.

“Whatever student representation is on [committees], it doesn’t necessarily seem to be that they’re representing the whole student voice,” Stukalin said. “If administrators are speaking with these student representatives who don’t represent the student body, then administrators are then acting with this false sense of rationale behind their decisions, having spoken with what they think is the voice of the student body, when in fact it’s not… Students should have access to information and do with that information what they would like, but being kept in the dark obviously is not leading to the best outcomes.”

Lockwood said the dining services committee has always welcomed feedback, although existing mechanisms for students to provide input, such as the comment cards at dining halls, have largely been under-utilized.

“I hope that TABLE [The Advisory Body for Lobbying and Elections] will be better able to communicate [committee] progress to the student body through their public forums, and in that way pique the interest of more students to apply for committee positions,” Lockwood said, referring to the upcoming restructuring of student government. “In the past, there was no clear way to advertise your committee and what it does to the student body.”

Araya said he asked staff for possibilities to improve communication at the monthly meeting in January. Future communication about dining could include posting signs and hosting town halls, which would also gather input, Araya said. He added that he would like staff and student voices to feature prominently in the construction of the new training program. Stukalin said Daily Messages and all-campus emails could provide a further opportunity for communication with students.

“I will have to have a larger discussion,” Araya said. “I’ll form committees and have [dining services workers] give me some more input. I would love to know what’s the best way to communicate this messaging accurately to our student body, and I’ll make sure I do it.”

Araya noted that a rotational schedule for dining services already occurs in the summer, when staff from various dining units work at Whitmans’, the only unit open. He said he does not wish to introduce any changes that are unwelcome but sees his role as responding to the desires articulated by dining staff.

“I took this job because there’s a lot of opportunities to do things better, and I am up for that challenge and I want to be part of that,” Araya said. “And I’m not here to change the wheel and make it harder or difficult for my staff. I’m here for them, and I’m an advocate for them.”