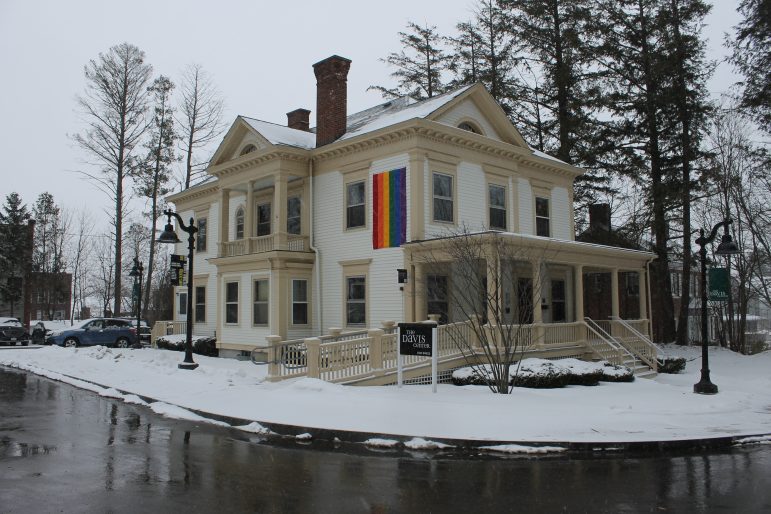 The office of admission and the Davis Center recently piloted a route change to admissions tours to include Morley Circle. DANNY JIN/THE WILLIAMS RECORD

Over Winter Study, the office of admission piloted a change to campus tour routes to add the Davis Center to the route. While past tours have included information about the Davis Center, the walking route now actually brings groups through Morley Circle, where the Center is located.

The office of admission reviews the tour route and tour guide training manual every year in an effort to improve the way the College is presented to visiting prospective students and their families. “This particular change was reinforced by students who shared their interest during the BSU [Black Student Union] town hall meeting this fall and subsequent discussions between admissions and Davis Center staff,” said Associate Director for Campus Programs Barbara Robertson.

The process has involved ongoing collaboration between the Davis Center and the office of admission over the past several years. Assistant Vice President for Campus Engagement Bilal Ansari and Strategic Adviser for Admission and Financial Aid Community Engagement Twink Williams Burns work closely together to “support one another’s roles in community engagement and to provide space to workshop ideas,” Robertson said, adding that Ansari and Burns meet twice a month in addition to regular email communication. The changes to the tour route itself were largely implemented by Robertson and Claire Oxford, admissions counselor and head of the tour guide program.

Before its implementation, student tour guides received a survey to provide their thoughts on the proposed change. “I was personally in favor of adding the Davis Center, but I was against adding Morley Circle to the accessibility route,” tour guide Melvin Lewis ’22 said. His objections stemmed from the fact that the proposed new accessibility route involved a steep hill that would be arduous for manual wheelchair users in particular. “But people who use wheelchairs often don’t come on college tours anyway,” Lewis said, “because a lot of them aren’t accessible and the Williams campus is, in my opinion, particularly unfriendly to anyone with mobility issues.”

Regarding the regular route, however, Lewis added that the inclusion of Morley Circle will also allow tour guides to mention the North Science building that is currently under construction, along with the sculpture adjacent to the Davis Center buildings.

Prior to this recent change, tour guides could mention the Davis Center when approaching the nearby science building, but it was not an established point of note.

Student tour guide Laura Wang ’21 also expressed support for the change. “It makes the tour a little longer, I believe, but it allows for more time and space to speak about the importance of the Davis Center, one of the most vital resources on campus,” she said. “Us JAs are trained heavily by the Davis Center, and to me, it gave us a lot of meaningful experience to prepare us for this role.”

Carmen Whalen, professor of history and interim director of the Davis Center, also spoke on the significance of the change. “The buildings [on the part of campus added to the route] collectively are home to dozens of student affinity groups, and to the Davis Center and the office of special academic programs, both a part of the office of institutional diversity, equity and inclusion,” she said. “The new route for admissions tours, along with the [Davis Center] building project, is recognition of this history and the on-going work of the Davis Center to support students from historically underrepresented and often marginalized groups, while working with everyone to build inclusive learning environments throughout campus.”