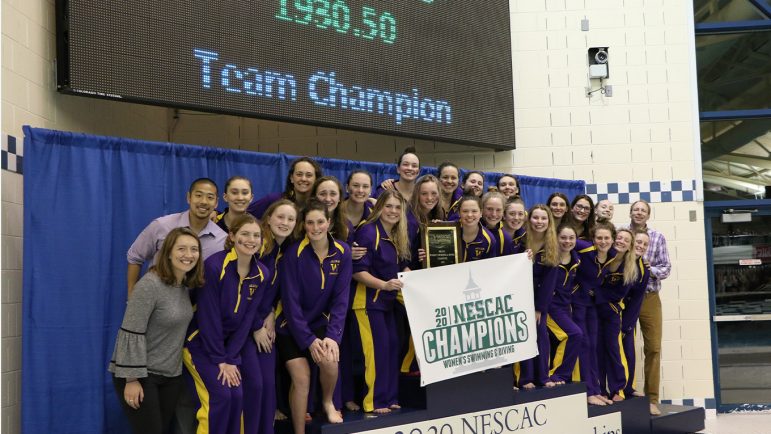 PHOTO COURTESY OF SPORTS INFORMATION. After the women captured the NESCAC championship title on Sunday, the team and its coaches took a celebratory jump into the pool.

Women’s swimming & diving emerged victorious at the 2020 NESCAC Championship, placing first with 1930.50 points. The women were followed by Tufts and Amherst, with 1593.50 and 1369, respectively.

The Ephs began the meet strong, securing first in the 800 freestyle team relay. The team, which consisted of Casey Delano ’21, Molly Craig ’21, Gwyneth Maloy ’21 and Laura Westphal ’21, finished with a cumulative time of 7:20.76, six seconds ahead of the competition.

On Day Two, the Ephs followed their first victory with another, as Samantha Kilcoyne ’21, Craig and Westphal set a pool record in the 200 freestyle relay.  Kilcoyne took the first individual NESCAC title for the Ephs in the 50 breaststroke with a time of 24.65.

Westphal, a national champion in the 500 freestyle, took first in the event with a time of 4:53.46, earning her a NESCAC title and the second fastest time in Div. III this year.

Conforti, Caroline White ’20, Kilcoyne and Westphal wrapped up the second evening with a first place finish in the 400 medley, securing a time of 3:44.89. The Ephs led the Jumbos 754–714 as the two teams headed into the third day.

The third day of the conference championship opened with the team of Conforti, White, Kilcoyne and Maloy leading Williams to victory in the 200 medley relay with a cumulative time of 1:42.18.

In the 400 individual medley, Craig, a three-time conference champion, won the NESCAC title once again with a time of 4:19.98, finishing over four seconds ahead of the field. In the 100 breaststroke, White sped to first place with a time of 1:02.47. The Ephs went into the final day of the championship with 1372.5 points, significantly ahead of the Jumbos, who followed with 1141.5.

The final evening began with the longest race of the weekend, the 1650 freestyle. Westphal, Kerryann Reynolds ’22 and Katie Orringer ’21 competed in the race. Westphal, who won the 1650 at last year’s conference championship, took the lead early in the race and finished first in 17:05.88, placing her ninth in the country. Reynolds followed in third with 17:17.63 and Orringer in fifth with 17:23.56.

In the 200 backstroke, Maloy cut a half-second off her prelim time to finish second in a time of 2:01.65. Abby  Matheny ’22 also represented the Ephs in the championship final, placing fifth in 2:04.04.

White and Amanda Wager ’23 battled for the top spot in the 200 breaststroke. Wager, posting the fastest time in prelims, was neck-to-neck with White until the final wall, when White pulled slightly ahead of Wager. White clinched the NESCAC title in a final time of 2:15.05, with Wager finishing in second a half-second later. Maddie Annis ’23 and Sarah Johnson ’23 placed 13th and 15th, respectively. The Ephs represented half of the championship final in the 200 butterfly. Wolff grabbed third for Williams in 2:02.83, the seventh-best time in the country.

Earlier in the day, Gabriella Mercier ’21 and Emma Casey ’23 nailed the 3m competition, with Casey finishing in second with 445.75 points and Mercier finishing in third with 437.70 points.

The 400 freestyle relay concluded the championship. Delano, Georgia Panitz ’22, Samantha Kilcoyne ’23 and Westphal participated in the final relay, and as the four sprinters raced down the pool, their teammates cheered them on from the opposite end. Delano led off the relay in a speedy 51.61, and Panitz followed suit in 51.90. At the hundred wall, the Tufts relay had the lead until Kilcoyne dove in, finishing in an impressive 50.86. Westphal’s split was completed in 50.48, making her performance the fastest for the Ephs.

Caroline White ’20 is a member of the women’s swimming and diving  team.