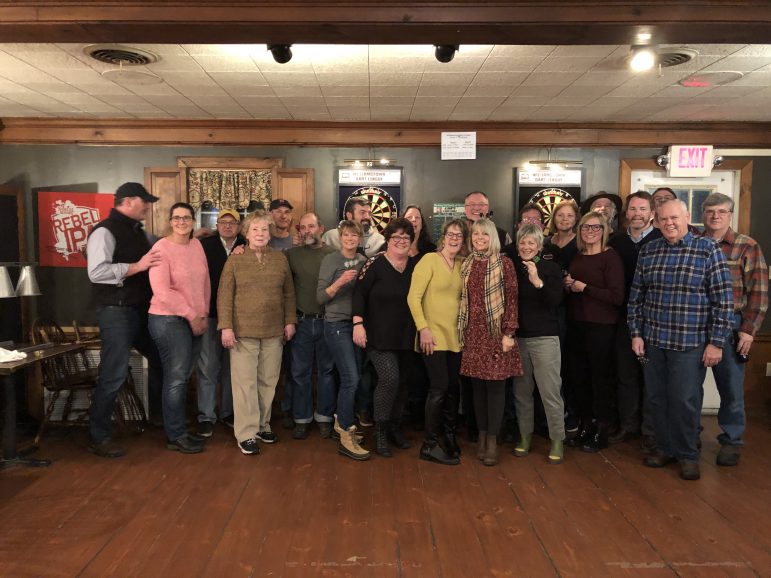 PHOTO COURTESY OF ANDY MUNZER. Williamstown residents have been gathering to play darts since the 1980s as a way to brighten up dreary Berkshire winters.

Two dart boards hang on the wall at Water Street Grill with “Williamstown Dart League” printed above them. Knowing nothing about the game of darts, I arrived at 6 p.m. last Thursday to watch the competition. Local residents filled one side of the restaurant, eating, drinking and cheering on their teammates.

The league meets every week from December to March for matchups, which lead to playoffs at the end of the season. Divided into eight teams, the competitors face off in games of “Around the World,” in which each team tries to hit increasing numbers on the board followed by the bullseye.

Members estimated that the league has existed since the early 1980s in different locations, including at The Orchards Hotel and The 1986 House. Some members of the league have played darts for much of their lives and even compete in the more competitive league in Bennington, but for many members, the league is largely social.

“There’s a lot more drinking than darts,” Andy Munzer said. Munzer, who goes by the nickname “The Czar,” is the current leader of the league. His responsibilities include making the schedules and answering questions about the rules. “There’s probably about seven or eight people that are really into darts… Some people just don’t care about darts. They’re here because they like the people. And we welcome them all.”

One league member, Bernadette, noted how the league brings people with different political perspectives together. “There are a lot of Republicans and Democrats here,” she said.

For Reese Hughes ’85, the dart league not only connects people with different political ideologies, but also bridges the town–College divide. Hughes, who returned to the area years ago to work in the College’s development office, noted a perceived disconnect between the two groups.

“When I moved here after having gone to school here, people basically said, [in order] to become a member of this community, you’re going to have to convince people that you’re committed to this community in the same way that someone who’s been here their whole life would be, and that takes a while,” he said.

While playing darts, Hughes explained that the league has helped bridge this gap. “There’s a very long relationship here with [people at the College] and the town coming together… It’s also a good sort of meeting place for the minds. There’s a lot of perspective sharing and questioning.”

At around 7 p.m., after the league matches ended, the games opened up to more casual competitions. The socializing continued with speed darts, a game in which two teams play on different boards at the same time with the goal of hitting all the numbers and the bullseye first.

“You’ve got to stay for speed darts,” Bernadette told me. “That’s where all the vulgarities come in.”

Despite having never played darts before, the league members immediately added me to one of the speed darts teams and taught me the basics. Although I missed the board multiple times and contributed very little to the team’s performance, I received cheers, high-fives and fist bumps whenever I hit the board.

“It’s just fun,” Munzer said. “And this league — well, first of all, I love to play darts, but secondly, this is an awesome group of people, and I’ve known them all for a really long time… Once we get to mid-end of March, we’re done. We go back to our lives and our spouses or whatever, but having this to count on every Thursday is really a great thing.”