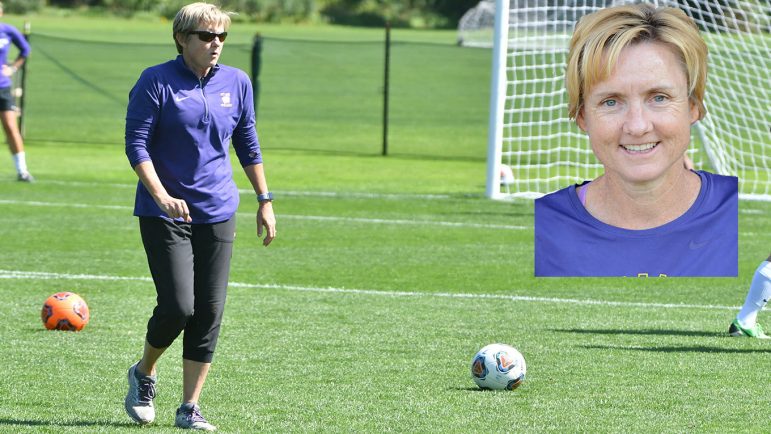 On Feb. 12, Athletic Director Lisa Melendy named Sarah Raymond as the College’s next women’s soccer head coach. Raymond, currently in her fourth year as assistant coach for the team, will replace longtime head coach Michelyne Pinard, who is relocating to California later this year. The Record sat down with Raymond to find out more about her approach to soccer, her coaching philosophy and her experience competing in the FIFA World Cup with Team Australia.

Pinard is leaving [the College] in June after 18 seasons with the team. What do you think you’ve learned from her and how was your experience working with her?

It’s been an incredible experience. [Pinard] worked so hard to create this program and get it to where it is today… Williams has always been a strong program, and in the last decade, it’s become one of the premier programs. Getting here, I knew about the level of play and the level of the program. Seeing how [Pinard] has balanced the academic piece — given that Williams is so challenging academically — I think I’ve really learned what works for the players here. I think that’s the huge benefit having worked with [Pinard] for the last four years. I don’t plan on changing that. I think I’ve added a great deal to the team as well. Together [we] kind of combined our styles and our strengths. I think what you see on the field is a combination of the two of us over the last four years.”

The team had a tough loss in penalties at the Elite Eight this year. What were some of the takeaways from that game and the [last] season in general?

It was a season that just didn’t look like other seasons. We had a couple of early losses that some of our older players had just not had in their previous years here. I think that, in a way, it really started to make them question whether they were going to be good. I think the takeaway from that is not to feel the pressure of what [the program] might have looked like in previous years. Each team is going to be unique in their own way. In the early part of the season, that’s what we’re trying to figure out. We’re building towards what we’re going to look like in November. As long as we are doing all the right things and preparing in the best way possible, with the type of student athletes we have here, we will have a really strong team come November. This year, the soccer we were playing in the last two weekends in the postseason was like night and day from how we were playing at the beginning of the year.

I just want us to know that [our team] could look different each year, and it doesn’t mean that the outcome at the end of the day cannot be the same; it just might be a different journey each year. We played fantastically in our last game. It was a tie, and we ended up going out on penalties, which takes luck. We’ve had luck the years we’ve won, and this time we didn’t — that’s soccer. I truly think that had we got through [that game] we would have won the whole [tournament] again. My goal is to have us remember that and have us start off where we finished off.

Recruiting is a major part of being a coach. What is one thing you look for in a recruit that most people wouldn’t expect?

We all look for the best possible and the most well-rounded players. Given Williams’ academic rigor, [their academic profiles] have to fit as well. I look for players that I’m just excited about. That’s just a feeling. I can’t really tell you what that is. Having conversations, working with them, learning who they are and seeing their passion and why they want to play soccer — that’s what I want to feel from a recruit. They’re the people I want to surround myself with because then, no matter what, the season is fun. They’re going to compete, and we’re going to love what we’re doing. I know we’re going to have the best time at practice, becoming the best team we can be.

I know you were a player yourself, as a member of the Australian Women’s National Team. How do you think playing the sport itself translates to coaching, and is there anything specific you learned through your experiences on the national team that you would like to implement into the women’s program here?

It feels like a long time ago that I was a player! I came from a very isolated part of Australia, and no one had ever made it to play for Australia for the women’s team. I think as a young athlete who aspired to make it, there was a lot I had to do on my own. I didn’t necessarily have the team at my level to train with, so I just had a lot of self discipline and was fortunate enough to have some male players to train and compete with me. I think it gave me the mindset that I can do this,  but it’s going to require me to be extra disciplined to make it from where I came from. My goal was always to be the fittest or one of the fittest. All the things I could control I wanted to be the best at. This has all come with me as a coach. I want to instill this in my players. I want to help them find what motivates them. For me, it was proving myself coming from this middle of nowhere place. Helping my players find what will drive them to be the best athletes and players and teammates is important to me.

Do you have any special memories from competing in two World Cup tournaments?

Every country that plays in the World Cup plays to win the World Cup, so, when you don’t win, you remember it as a failure. I think it’s helped to realize it’s not a failure. You failed in that goal, but you can’t look at it as being a failure. There are so many things you can take from that. When I was playing, it was the time when women’s soccer started to take off. The difference between the 1995 and 1999 World Cups was like night and day. In ’95, we went to Sweden, which was great. However, we might have played in front of 4,000 people, and we were in little fields I wouldn’t consider fantastic. In the ’99 World Cup, which was in the United States, we were suddenly in team buses surrounded by police escorts and playing in the biggest stadiums in the country. We played in Boston, D.C. and the Meadowlands, N.J. At the Meadowlands, we played against China, and I felt like there were about 50,000 people just at that game. It was unbelievable to be a part of soccer at a time where it had gone from no interest to now unbelievable interest. It was really cool to be a part of that movement.

How do you foster team chemistry? Are there any particular team traditions or activities?

I would say the team culture at Williams is second to none. It’s part of the reason why we are so successful, as well as having talented players. You can have talented teams, but if the team chemistry is not good, you just don’t go that far. … I think the chemistry we had in the second national championship we won was such a huge factor in us winning. The players were just going to put everything out there for each other. We didn’t play the best soccer at all. At times we were so beat up with injuries that I wasn’t sure how we were going to put a team on the field the next day. Those that were still standing were just like, “I’m just going to do everything that I can right now.” It was amazing to see what that type of love and compassion could do.