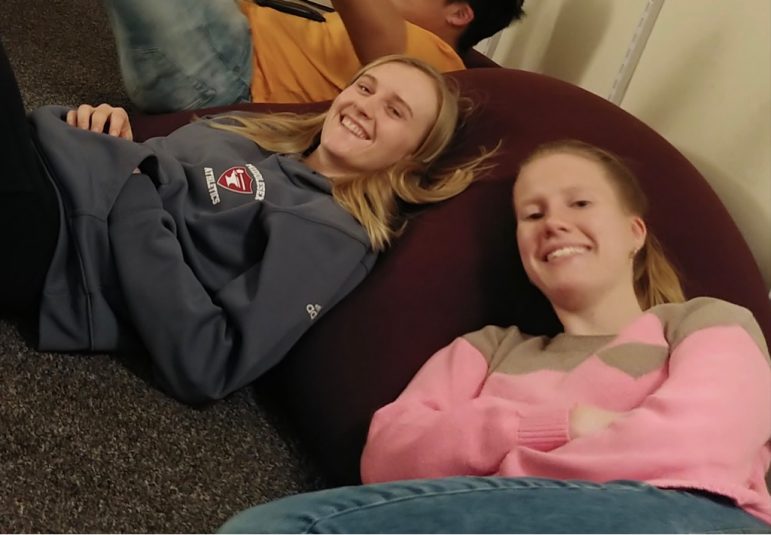 Last fall,  Rachel Cross ’21, a member of women’s tennis, created HalfTime, a club for Christian athletes and “seekers,” who are those interested in Christianity but not necessarily Christian. Although the InterVarsity Christian Fellowship unites Christians on campus, many athletes could not attend the fellowship’s meetings due to practice and game schedules or wanted a more laid-back forum in which to discuss religious issues.

“There were many athletes interested in Christianity or had it as some part of their background or childhood,” Cross said. “They hadn’t explored it at Williams, but some were interested in doing so, and I wanted to give them a way to go about that.”

The meetings offer a space and time for both Christian athletes and seekers to take a break from the stress of academics, practices and competitions to share their faith. To accommodate the athletes, the group meets on Mondays from 8-9 p.m., a time when they typically don’t have practice.

The club’s name originates from the term “half-time,” which marks the intermission between the two halves of a sporting event. The first half of the meeting consists of chatting, snacking and playing games to foster a welcoming atmosphere, while the latter half consists of introductory Bible study. Cross leads the Bible study portion, dissecting short passages and encouraging conversation.

Cross noted that the group also welcomes non-athletes and  students who are unsure about joining a religious community on campus. “A lot of people that wouldn’t otherwise come [to Christian club meetings] are those that aren’t necessarily Christian, so I think [their attendance is partly due to] having that trust in their relationship with me and wanting to explore [Christianity],” she explained. “When they come in, we aren’t immediately talking about the Bible and how God has worked in your past week or in your life … It’s more like we come in and talk about how our week was going, we eat some snacks, we play games and then we look through the Bible.”

HalfTime also provides a space for athletes to reflect on the intersections between their religious beliefs and their sport, and to discuss what it means to be a faith-based athlete. “We [joined the club] because our sport is an important part of our lives, but so is our faith, and we want to balance the two,” swimmer Isabel Bushway ’23 said. “Swimming is a big part of my life, but my faith comes first for me. Not everyone on my team understands this. I like the support that I can get from this group [while] navigating a busy life with faith as a priority.”

For someone who is one of the few or perhaps even the only Christian on a sports team, it can also be difficult to navigate the aspects of “athlete culture” that conflict with religious values. Sarah Gantt ’23, a member of the women’s crew team, chooses not to engage in partying and drinking for faith-based reasons, so she initially had trouble getting comfortable in social situations with her team.

Similarly, Bushway described the personal conflict she experiences when she prioritizes her faith over spending time with her teammates. “For me, faith comes before swimming in a way that it doesn’t for most other athletes,” she said. “This means taking time out of my day to go to church and prayer instead of hanging out [with the team].”

On the whole, Gantt said, many of the aspects she loves about her sport also intersect with and build on her Christian principles. “The sense of community on the women’s [crew] team intersects with what I’ve been taught about fostering a loving, supportive Christian community,” Gantt said. “I think a lot of the values are similar: trust, honesty, love.”