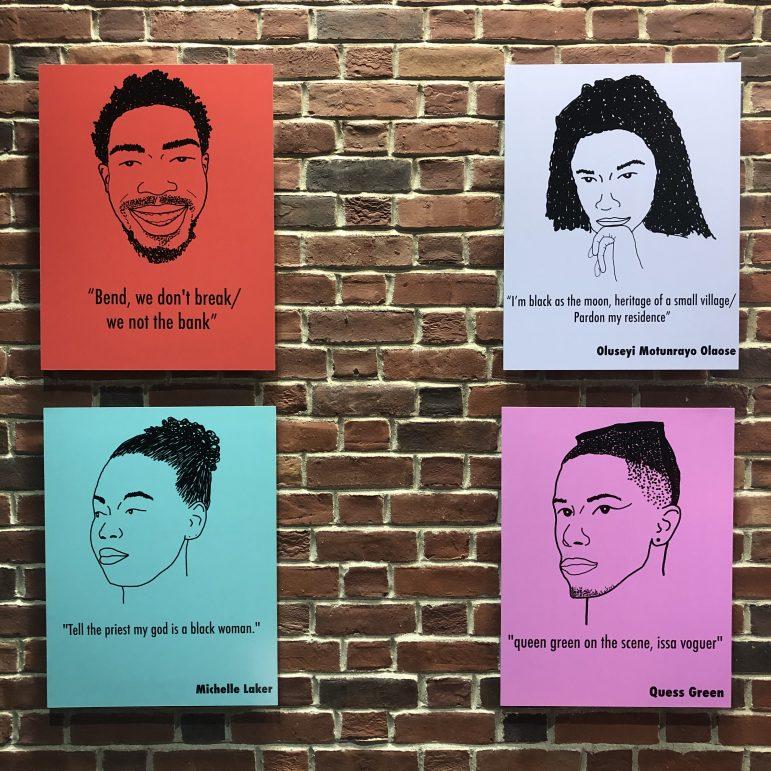 KIMBERLEAN DONIS/THE WILLIAMS RECORD Kyle Scadlock ’19 drew several black students and created an exhibition to display these drawings along with a quote selected by the students.

Studio art major Kyle Scadlock ’19 created 42 digital prints of black Williams students that were temporarily exhibited on the front of Paresky Center last spring but are now located on the third floor of Sawyer Library. According to Sawyer’s circulation desk, these portraits were installed in the library over Winter Study.

Last year, Scadlock sent out a Google Form to students who identify as black through the Black Student Union listserv and an all-campus GroupMe called “Black Chat.” Through the Google Form, students could submit a picture of themselves for Scadlock to draw. Each student chose the name, caption and solid-colored background for their portrait. The range of background colors to pick from allowed black students  to express themselves freely. One pictured student said in an interview, “It’s really cool that you have all these black people but all the colors are so different.” The combination of customized backgrounds created an eye-catching mosaic that Joseph Wilson ’19 called “a pop of color.”

Some students kept their full name with their portrait while others chose to remain anonymous. According to Hamza Mankor ’22, Scadlock himself remained anonymous. Mankor wanted to include his full name because he appreciated the purpose of the curatorial project. Morgan Whaley ’20 admitted, however, that she can recognize almost everyone by their faces even if their names are not included.

Captions included song lyrics, hashtags and quotes. For instance, Papa F. A. Anderson ’21 submitted a quote by Pan-Africanist Kwame Nkrumah, one of his favorite African leaders, because he connects with Nkrumah’s belief that Africans can come together as one people. Wilson chose “#Black Boy Joy,” which he called a “popular hashtag showing black men being free and enjoying life.” Mankor included Frank Ocean lyrics to pay tribute to the Ocean lyrics in Scadlock’s controversial Trayvon Martin installation outside of Paresky last year. Whaley explained that this exhibition was created “in response to the political climate last year.”

Students were asked to comment on their experiences seeing their portraits displayed in public, first outside Paresky last spring and now on permanent display in Sawyer. “It was weird to see my face on a school building, but the fact that it was with the rest of them was a really cool experience, seeing all these black faces being put on a really pivotal campus building,” one student said. The same student, who wishes to remain anonymous, also admitted that she was more comfortable with their permanent location in Sawyer.

Multiple students expressed that they appreciated the visibility of the portraits in a frequented location on campus. Wilson said he was “shocked” and “pleasantly surprised” with how the current installation looks. Mankor said he wished that the portraits were located in a more central campus location. “I think that a lot of people of color on campus feel small, alone and quiet,”  he said. Similarly, Morgan said, “Sometimes there aren’t a lot of spaces for black faces or black voices.” Every student interviewed was grateful for the visible presence the portraits created. Wilson explained that it was a way for black students to say, “We are here.”