“The invisible enemy should not exist” continues a necessary discussion, asks for institutional responsibility and change 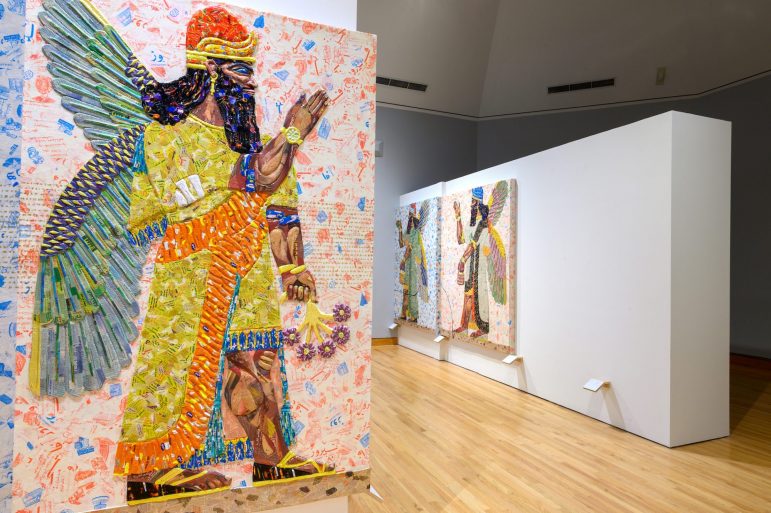 PHOTO COURTESY OF THE WILLIAMS COLLEGE MUSEUM OF ART. WCMA transfromed one of its galleries into an exact replica of the Room Z of King Ashurnasirpal II’s ninth century palace. The piece engages with a complex history of art collection.

It’s no surprise  that the College has its foot in a myriad of fraught histories and narratives. It is interesting, however, that tangible anchors to such stories exist, some of which seem to venerate the role the College has played in what we would now consider colonizer narratives. Just take a look at the Black Room at the Log. There, above the fireplace mantel, sits a mural entitled “The Blood Morning Scout.” Painted in 1942 by popular Northeastern muralist Stanley Rowland, the composition depicts a moment of collaboration and comradery between Mohawk leader Theyanoguin Hendrick and Colonel Ephraim Williams before the 1755 Battle of Lake George, where both men would die. In its portrayal, the mural glosses over more nuanced relations, presents a simplistic and romanticized picture of the College’s relations with indigenous culture and reduces Native American peoples to stereotypes, diverging from historical accuracy and adhering to a false history.

Last week, I could not help but think of another approach taken to grapple with another troubled piece of Williams history just up the hill at the Williams College Museum of Art (WCMA): Michael Rakowitz’s exhibit The invisible enemy should not exist (Room Z, Northwest Palace of Nimrud). The exhibit is part of an ongoing series created in reaction to the U.S. invasion of Iraq and the lootings of artifacts from Iraq’s historical sites and Baghdad’s National Museum. This particular exhibit displays a 1:1 architectural scale reconstruction of seven of the 13 limestone reliefs that once lined the walls of Room Z in the Northwest Palace of Nimrud. Rakowitz was compelled to reconstruct Room Z after the remnants of the Northwest Palace were diminished to rubble by the Islamic State of Iraq and Syria (ISIS) in 2015, forever erasing their remaining in situ reliefs.

Inside the exhibition, Rakowitz re-envisions the limestone reliefs in their original scale, form and composition, however, adding his own definition to their contents in a modern, diasporic world. Instead of neutral stone, Rakowitz adorns the recreations with wrappers from Middle Eastern foods, newspapers and other cultural goods available to those with Middle Eastern heritage living in the United States. In this radical departure from their original state, Rakowitz constructs an entire new being for these reliefs, accounting for contemporary life in the diaspora, popular culture and the legacy of the original reliefs’ disappearance. And yet, within the exhibition’s simulteonous reconveyance of the Palace’s reliefs and its cultivation of entirely new imagery, color and texture, there is a dissonance between the towering reliefs and exhibiting white gallery walls. In the place of the reliefs destroyed by ISIS, the dissonance regarding what art belongs to whom and within what spaces perhaps speaks more than what is visible.

The omissions, or lack of reliefs, speaks to the difficult history of the Palace and historic sites all over the Middle East. Beneath the re-imagined reliefs and the empty gallery spaces where in situ reliefs would have been, the descriptions list where the remaining reliefs are exhibited, such as Munich, London and Mumbai. If a place is not provided, the reliefs are listed as being “missing” or “in situ (destroyed by ISIS in 2015).” These blank gallery walls raise questions about missing and misplaced artifacts around the global art world. Whether stolen or simply placed out of their original context, the empty gallery walls, which can be substituted with the former Palace’s interior walls, yearn for a return to form and for the recovery of their true narratives.

The contrast between the glossy wrappers, color-saturated clothing adorning the relief subjects’ bodies and the adjacent blankness are intensified by the works that The invisible enemy should not exist is responding to: two Neo-Assyrian reliefs in the adjacent room. These reliefs, also from the Northwest Palace of Ashurnasirpal II in Nimrud stand at the end of the The invisible enemy should not exist’s processional journey. Donated to the College by alumnus Reverend Dwight Whitney Marshe ’1842, these two reliefs contain a fraught history with direct linkages to what Rakowitz pushes against: looting, historic erasure and the uprooting of artifacts from their intended contexts. Marsh, a missionary who traveled to the Middle East to spread Christianity, used his religion and ideas of pedagogy to attempt to justify his colonizer role, his theft of two ancient reliefs and his generally primitivist view of Middle-Eastern peoples, as he stated in his 1855 letter to President Mark Hopkins when he donated the two works. “My great desire & prayer is… to be led to take a deeper interest in the efforts made to rescue the degraded from the beastliness of their present life, & the eternal dangers impending,” he said. Through this acquisition, the College becomes directly complicit in the issues of responsibility, ownership and destruction which Rakowitz directly references in The invisible enemy should not exist. As with the Log mural, the two ancient reliefs in WCMA are symbols of the College’s past culpability and involvement in narratives of colonization, looting and confiscation of non-Eurocentric cultural and societal landmarks.

Rakowitz’s reinvention of lost histories, accounting for the ghosts of the long-lasting materiality of objects (sometimes even extending past human life), begins to address unanswered questions about the College. In WCMA’s attempt to confront its fraught history,  it symbolically  cedes ownership in constructing narratives around artworks that were once in situ somewhere else. While Rakowitz nuances and exposes the western institution and ISIS’s role in the destruction of Middle Eastern historic and artistic landmarks, particularly the Northwest Palace of Nimrud’s destruction, and thus implicitly points to the College as being a part of this account of colonialism, increasing self-awareness by WCMA could further this conversation. Why is that more critical plaques did not complement the reliefs in more recent years? How will this exhibition influence the College to institute serious changes regarding its complicated history? The invisible enemy should not exist is an attempt to call for more discussion, and, like any well-curated exhibit, it achieves this. But, as an institution, will the College take the next step, looking past the purely pedagogical and academic benefits of such discourses and toward measures that take responsibility and pay recompenses?