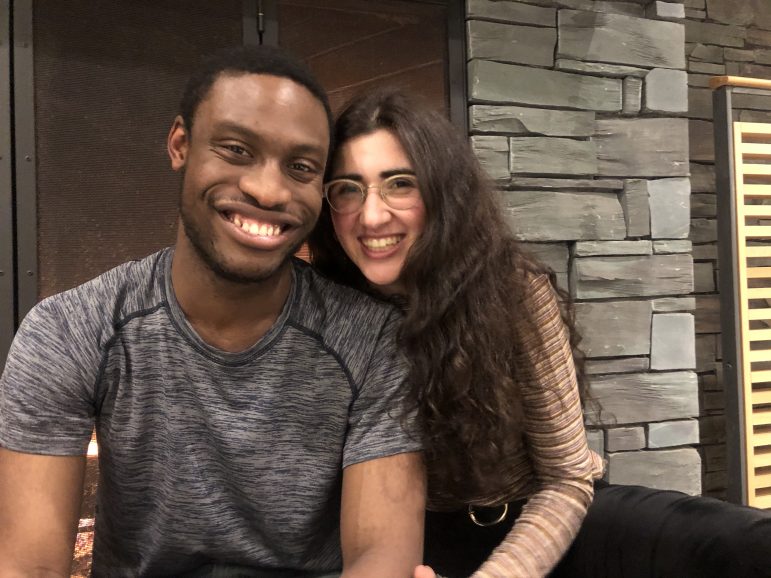 In honor of Valentine’s Day, the Record brings you its annual profile of a campus couple. This year, that couple is Sam Mecha ’21 and Claudia Rodriguez ’21, whose initial friendship, which revolved around sharing songs with one another, has evolved into a nearly one-year relationship. I caught up with them to discuss traveling in New York, the usage of “[Laughs.]” in Record interviews and, of course, music.

Sam Mecha (SM): You know the funny part of these articles? When the interviewee laughs and they just put, “[Laughs.]” [Laughs.]

Jeongyoon Han (JH): Well, that’s going to go in because you just laughed.

Claudia Rodriguez (CR): We were both freshmen in Mission. He was in MD1; I was in M2. And I guess there were mutual friendships between both entries, so he spent time in my common room sometimes. I eventually spent some time in MD1. We got acquainted with each other because I would always go through MD1 to go back to M2 and I would see him in the common room a lot, but it wasn’t until we had friends who introduced us to each other.

JH: Who was the mutual friend [who introduced you]?

CR: No. She set up a friendship, kind of, but not with the intention of it being more than that.

JH: What was your friendship based around?

SM: We’re going to look so stupid. Anyway, we would send music to each other, songs that we thought the other person would like. Our song tastes really overlap. Also, we took MATH 150 together sophomore fall, so that provided another avenue for us to meet, because we were doing homework together and going to class together.

JH: So, what’s the music vibe?

CR: By genre, it’s mostly rap, R&B, some jazz. Mostly rap for both of us. I lean more towards the R&B and jazz, and he leans more towards rap and hip-hop.

SM: Sometimes, a song goes so hard that I just want to send it to Claudia. Recently she sent me a song called “Right Here” by Dave B.

CR: There are multiple Dave Bs on Spotify.

SM: Dang, these questions. Yo, who woulda thunk, an interview. Give me a second. I feel like it has a more unique rhythm than the songs that I generally listen to. And it has a good balance [between] it being an energetic song while also doubling as a song that can be used in more relaxing settings.

CR: You can bump it or just vibe. The last song he sent me — the thing is, I’ve sent him so many more songs in the past month than he has sent me.

JH: Would y’all just send a bunch of songs to each other?

CR: Yeah, and we would make playlists together. I think I suggested the idea of making a collaborative playlist together.

JH: But as friends.

SM: Yeah. Our friendship revolved around music at that point.

CR: It really did. I think we barely had conversations over text. We were just sending songs and reacting to them and then sending more songs. I feel like twice, we asked each other how the summer was going.

CR: I think it’s so fundamental to our relationship.

JH: So, y’all were in New York during Winter Study. How was it?

CR: We went to a ton of museums. We went to the Brooklyn Museum. They had a bunch of different artists come in. We went to MoMA [Museum of Modern Art] and the New York Public Library.

SM: Because as Williams students, we still need to find time to do work, even during Dead Week.

CR: And we ate some good [food]. It’s funny because the first two nights, we ate cuisines that were found on Spring Street: Indian and Thai.

JH: And y’all made food yourselves for Valentine’s Day, right?

SM: Damn, she’s really asking all of these questions. But yes, we did. We ate scallops and risotto.

JH: Why that specific dish?

CR: We wanted to treat ourselves, but according to Sam, going to restaurants is a symbol of status. It’s very indulging and opulent and attracts attention that’s kind of unnecessary.

SM: However you all want to do Valentine’s Day, y’all do you, just make sure you show love to your significant other. Y’all can do you, it’s okay.

JH: So shrimps and risotto?

CR: No, scallops. Do not support the shrimp industry. Because shrimp farming is —

SM: Oh wow, she really has a political agenda here!

SM: See, you came into this article with an agenda, here. Go off!

JH: What is one good memory that you all have together?

SM: Ah, there are so many good ones.

CR: Within our relationship, the Brooklyn trip for me. [Mecha nods in agreement.] In our relationship as people, I remember this one time Sam came to Tyler Annex as I was cooking, and I asked you [turns to Mecha] if you wanted to eat anything and you said no, but I pushed you a little further and I remember serving you food, a small plate of food, and seeing you enjoy my food. It’s another mark of validation, in a way, because I knew he liked my taste in music, but I didn’t know that he liked me in other capacities.

SM: I can give one, but it’ll take some time because there are a lot.

SM: Okay, we can stop with the cuddly shit. [Laughs.] Real talk, favorite memory. I’ll give a funny story. There were several occasions where I asked Claudia to wake me up early because I needed to get work done —

CR: No, this happened only one time.

SM: It was twice! So I wake up the next day and I wake up much later than I thought I would, and so I asked her, “Why didn’t you wake me up?” And she said, “Well, you were very tired, so I let you sleep a little longer.” [Laughs.] That shows how she cares.

JH: What’s one thing that you really, really like about the other person?

SM: And what I really, really like about you is that sometimes I feel like I lose confidence in myself — I can always count on her to not lose confidence in me. There have been times where you’ve seen me in low points, and you never saw me as a failure that I thought I was —  even in those moments.

JH: If you had to describe the other person with a song that embodies that person or reminds you of them – what would it be?

SM: The song that reminds me of her is “Sandstorm” by Mereba ft. JID. [Laughs.]

CR: I have two songs that reminds me of him. The first one is “Mona Lisa” by Monte Booker and the other one is “Holy” by Jamila Woods. A song that I really like right now because it reminds me of Sam — oh no, it’s going to sound so cheesy saying this out loud —

CR: It’s “Find Someone Like You” by Snoh Aalegra.