Insights from a decade of honor committee reports 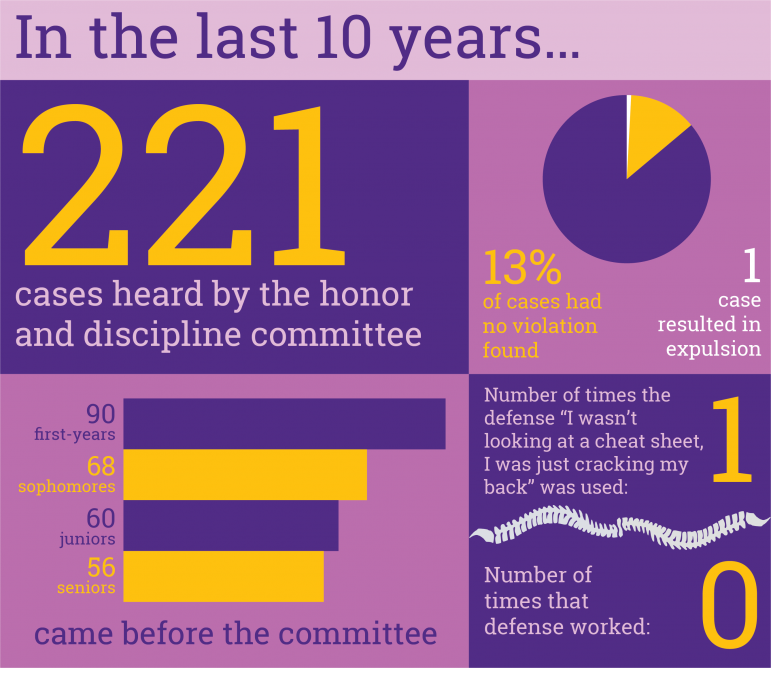 Every year, the honor and discipline committee — the 17-person group that adjudicates suspected violations of the College’s academic Honor Code — releases a report with short, nameless summaries of the cases it has heard. Dean of the College Marlene Sandstrom, who serves on the committee in a largely non-voting capacity, compiles the reports, which are available on the “Academic Misconduct” page on the College’s website. These reports offer insight into the demographics, alleged offenses and consequences for the students who have been accused of violating the Honor Code.

The Record has combed through all of the reports from the last ten years. Here are some of the main takeaways.

The most common sanction for a violation is failure in the course, sometimes accompanied by disciplinary probation; suspensions and expulsions are rare.

Every year, the majority of students found responsible for violations have received the sanction of failure in the course. Many of those with this sanction were also assigned disciplinary probation, although that portion has been declining, from 50 percent in 2009-2010 to 7 percent last year. Now, such a sanction is generally reserved for more serious violations.

“If there is disciplinary probation now, usually it’s because there was something unstraightforward about it,” said Professor of History Gretchen Long, faculty chair of the committee. “Maybe it was repeated instances. Or if the person put someone else in the line of fire, I would think that would be more likely to incur disciplinary probation. How egregious something was is kind of the scale.” Long, like the other seven faculty representatives, is a non-voting member of the Committee.

Until last year, if asked by graduate schools or employers, students were required to report any sanction the Committee had imposed, even ones as minor as failure in the assignment. At the beginning of last year, the Committee limited its reportable sanctions to disciplinary probation, suspension and expulsion.

“I’m not sure if I can speak to what may have played into other committee members’ concerns — I’m not sure I have enough knowledge of their deliberative process to speak to that — but I would say that in general, I do think it was a disadvantage to the committee’s process to have this rather blunt instrument, where any sanction triggered this finding of reportability,” said Nicholas Goldrosen ’20, student chair of the committee. (Goldrosen, who is a former editor-in-chief of the Record, was not involved in the writing or editing of this article.)

In the decade of reports analyzed by the Record, the committee never voted to suspend or expel for a first offense. Indeed, the reports reflect only one expulsion for an Honor Code violation — for a second-semester senior who, in 2011, lifted “multiple verbatim sections from sources without any attribution or quotation marks,” per the report from that year. It was the student’s third offense.

In an average of 13 percent of cases per year, the Committee finds all students involved not responsible.

The rate varies from year to year. In the 2011-2012, 2014-2015 and 2015-2016 school years, no case ended in a verdict of not responsible, despite an average of 17 cases being heard in those three years. In some cases, one student was found responsible and another was not (for example, if Student A copied Student B’s lab report without Student B’s knowledge). For the purposes of this analysis, these cases were counted as ones in which the committee found that a violation had occurred.

Over the past ten years, no more than a third of cases in any given year have ever resulted in all of the students’ being found not responsible. Findings of no responsibility have generally been rising since the 2014-2015 school year, with a peak of 32 percent in 2017-2018.

The committee adheres to the preponderance of the evidence standard, which means that it must find that a student has more likely than not violated the Honor Code. This standard is in line with that of peer institutions like Amherst, Bowdoin, Colby and Wesleyan. Pomona, in contrast, uses a standard of clear and convincing evidence, setting a higher burden to find a student responsible for a violation.

A majority of cases arise from Div. III classes — computer science in particular.

In the past decade, 53 percent of cases have originated from Div. III subjects. Goldrosen pointed to students’ unfamiliarity with the discipline-specific expectations of the subjects as a possible explanation for the trend.

“I think, also, in many of the cases we’ve seen, it’s a result of the pressures of the course structure and the work structure,” he said. “There are many where it’s, you know, the night before an assignment is due, at a crowded TA session, students aren’t feeling that they’re able to get enough help, and turn then to means that violate the Honor Code to complete assignments in a really stressful time.”

Of the 91 cases for which the academic subject is given, 17 concerned a suspected violation in a computer science course. Trailing far behind computer science are the next most common subjects: statistics, math and history, with nine, eight and eight cases, respectively.

The computer science department may yield so many honor cases because of the nature of its problem sets, which require the writing of code, Goldrosen suggested.

“The thinking goes, or as I would imagine the thinking to go, ‘If I can’t get this portion of my code to work, then I can’t turn in a working program,’” Goldrosen said. “That’s not a scenario you’d encounter in, say, a Division II course, where this paper I write might not be the best paper, but I feel that at least I’m able to write something and turn it in.”

Chenyu Zhang ’22, a student member of the committee, highlighted another trait specific to computer science that could account for the department’s many honor cases: the distinction between syntax and logic errors. Syntax errors are easily fixable coding mistakes, like a missing comma or a misspelled word, and students are allowed to receive help in fixing them. But students must correct their fundamental misunderstandings of how to approach a problem — known as logic errors — without help from other students. Any help solicited on a logic error is a violation of the Honor Code.

“For someone new to computer science, it can be very hard to understand exactly what is the difference between a syntax error and a logic error,” Zhang said. “So a lot of the cases we have — not every one, but quite a few of them — are related to this factor.”

Thirty-three percent of the students who have come before the committee in the last year have been first-years. Compared to their more seasoned peers, first-years are generally less aware of the standards surrounding plagiarism, Goldrosen suggested, and a tough transition to the College may lead some to cheat.

“The adjustment to the time management pressures and the academic skills of college more broadly can be really difficult,” Goldrosen said. “Being able to manage those dual concerns of perhaps not knowing where exactly the line is for academic honesty, as well as coping with a whole set of new stressors, academic and non-academic, and having to manage academic work in that context, I think combine often to form that higher rate of appearances before the honor committee that we see with first-year students fairly consistently.”

The sometimes-astonishing details of cases end up in the committee’s reports, albeit with no names given.

The reports are rife with intriguing, anonymous stories of academic dishonesty. There is the junior who, in 2017 or 2018, copied verbatim from an outside source without using quotation marks; unfortunately for the student, that source happened to be a book written by the professor. The student failed the assignment.

There is the sophomore accused of cheating on a quiz in 2010 or 2011 by looking at notes behind her chair. She told the committee “that she did twist and turn due to long term back difficulties, but that she had not looked at or seen her notes.” The committee was unmoved by her claims of dorsal distress and sanctioned her with failure in the course and disciplinary probation.

One sophomore who appears in the 2015-2016 report committed Honor Code violations in five courses and managed to avoid being caught. Apparently remorseful, the student took “the unusual step of admitting their behavior to their professors.” In recognition of the student’s probity, the committee handed the student a relatively light sanction of “failure on the relevant assignments, and recalculation of final grades in those courses.”

“Although such violations would ordinary [sic] be sanctioned with failure in the course,” the report read, “the committee wanted to acknowledge the fact that the student chose to come forward and accept responsibility for these violations without any external pressure.”

Long noted that when she taught at the Summer Humanities and Social Sciences program for rising first-years, she spent a class discussing some of the reports with her students.

“I had them up on the screen, and students read through them, and we talked about these different instances and tried to think about how to stay out of trouble,” Long said. “And I think that’s a good exercise for incoming students, not as a kind of scared straight thing, but, ‘What were the circumstances? Was it 3 a.m. and the person panicked?’… I think the reports can be good teaching tools.”