CeCé Telfer speaks about transgender inclusion in the NCAA 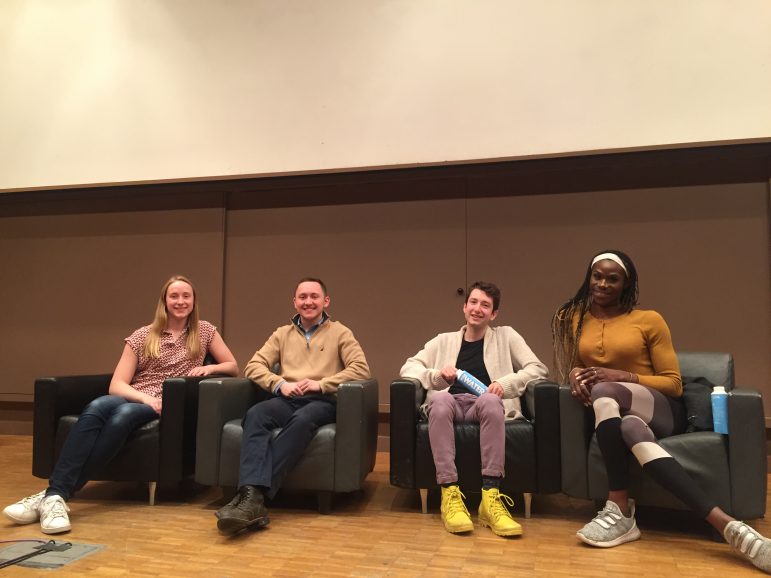 Some athletes do not talk with their competitors at sporting events, let alone hold hands in solidarity. Franklin Pierce University (FPU) track star CeCé Telfer, however, did exactly that with a rival athlete while on the starting blocks at nationals.

The exchange was brief yet powerful for Telfer, who has navigated the highs and lows of competing in college athletics, finding community and battling the emotional and physical challenges of being a transgender woman athlete.

Last Thursday, Telfer shared her experiences in the Claiming Williams panel, “Transitioning in Sports: A Conversation with Out Trans Athlete, CeCé Telfer,” which was moderated by Anything But Straight in Athletics (ABS) representatives Ryan Rilinger ’20, Laura Westphal ’21 and Ariel Koltun-Fromm ’20 and co-sponsored by the Athletic Department.

Speaking to an audience of approximately 160 people in Brooks-Rogers Recital Hall, Telfer spoke about her path to becoming the female athlete she was always meant to be. She wants to take this journey one step further by competing in the 2020 Olympics. “I’m really trying to make a statement and make a point of being on that track in Tokyo,” Telfer said. “I’m not here to play games. I’m not holding back.”

With her win in the 400m hurdle for the 2019 Div. II outdoor track and field national championships, she became the first out trans woman to win an NCAA track and field title.

Getting to this point, however, has not been easy. For Telfer and many others, including Rilinger – a trans male athlete on the College’s men’s lacrosse team – transitioning while competing in athletics takes a huge toll on the body, personal relationships and mental health. Transitioning, they said, requires inner positivity and perseverance, as well as support from team members, friends and athletic departmental staff.

This journey is part of Telfer’s life-long struggle to feel comfortable in her own skin. She was forced to grow up as a male in her conservative family household in Toronto. To this day, her family does not support her gender identity, Telfer said.

But attending college allowed Telfer to finally accept herself and live authentically.

“I was able to get away from that negativity and that strict, regressive lifestyle,” she said. “I finally started to bloom as a student, as the female that I am, and an athlete.”

While Telfer began transitioning and telling close friends that she identified as a woman in her first year of college, she trained with and competed on the FPU’s men’s track and field team. Doing so proved to be draining. “I realized [that] I couldn’t do this anymore,” Telfer said. “It was taking so much out of my emotions and my mental state.”

At the end of her sophomore year, Telfer quit the team, but came back junior spring to join the women’s team after adjusting to her hormone therapy treatment.

Policies on transgender student athlete participation in the NCAA were first rolled out in 2011. According to Wired, there are an estimated 150 to 200 transgender athletes currently involved in NCAA sports. Some have made waves within the athlete community for their personal journeys and successes in their sports, including Kye Allums, the first openly trans NCAA athlete to play in Div. I.

NCAA policy dictates that transgender males who have been treated with testosterone can compete on a men’s team, but not on the women’s without changing the team to mixed-gender status. To compete on the women’s team, transgender female athletes must first complete one calendar year of documented testosterone-suppression treatment or one-year post-surgical intervention.

Overall, Telfer said, these policies are straightforward, inclusive, welcoming and supportive for trans athletes to continue in sports but under close regulation. Much of what makes the transitioning process difficult for people – especially for athletes – is managing the physical changes caused by hormone therapy. Telfer pointed out the exhausting mental and physical challenges that come with undergoing testosterone blocker treatment. “You barely see [athletic progress],” she said. “It’s like you’re not moving forward, and it can put you in a place of depression… It’s hard to focus, you get faint spells, you get dizzy.”

Telfer was the subject of such criticism: In reference to Telfer’s success at the national championships, Donald Trump Jr. tweeted that it is “yet another grave injustice to so many young women who trained their entire lives to achieve excellence.”

Telfer said that this notion of an advantage is misinformed.

“People are talking about how it’s unfair for me to be competing with cisgender females,” she said. “I’m like, ‘How is it unfair? I’m changing my whole biochemistry, my testosterone is being suppressed; I have to work five times as hard as any average female.”

Still, Telfer said that persevering through these challenges was necessary for her survival.

“Transitioning is not a decision,” she said. “It’s either transition and be myself, or death.”

And the outcomes have been life-transforming, she said.

“I’m much more comfortable in my skin, I feel like I can breathe and I’m much happier with myself and my body,” Telfer said. “I can go out into the world and live my life authentically – how I’ve always wanted to live my life.”

In an interview with the Record, Rilinger said that working with the College’s Athletic Department to submit necessary documentation and navigate NCAA policies has been positive overall, but he believes that the department could do more to make locker room spaces more accessible and promote conversations for LGBTQ+ inclusion in sports.

“[The College’s] athletic programming is more reactive in terms of making the College community more inclusive,” he said. “I think the department could be a little more proactive into looking into conversations and initiatives for inclusion.” In particular, he has been working with the department to create more private shower and changing spaces in Lasell.

Within men’s lacrosse, Rilinger said that the team has done “a lot of growing” in creating a more welcoming space for those who are not cisgender, heterosexual athletes on the team. Still, he said that his team and others should be more conscious of smaller behaviors such as language or jokes that can make LGBTQ+ athletes feel less welcomed and inclined to share their experiences.

“I would ask every athlete here to think about the small parts of their culture that are often [not] reflected upon,” he said. “I would question even the most open-minded people to reflect on their behavior and be willing to look at yourself with a critical lens and see if there’s any way that your jokes or your conduct could be precluding certain groups from the table.”