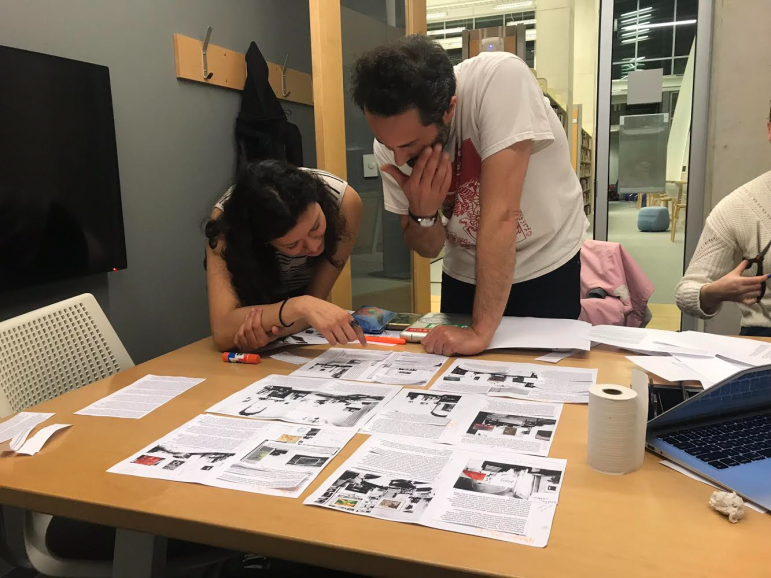 Jordan Stein taught students such as Clarissa Dominguez ’22 about how to curate art with a political purpose, engaging with Mike Pence’s political views as their class’s case study.(Photo courtesy of Olivia Demuth ’23.)

Mother. Mothership, motherland, mother nature, mother Mary; the word has countless uses, including being the term of choice for Mike Pence  when referring to his wife. This word had particular significance for eight students in the Winter Study course “The Restless Collection,” who spent the month of January  curating a political art exhibition that they would want to put in Mike Pence’s house based off the word “mother and all its iterations,” according to Olivia DeMuth ’23, a student in the class.

Their professor, Jordan Stein, is a San Francisco-based art curator who originally had the idea for the exhibit when he found an old catalog of exhibitions in a used bookstore. The catalog showed the house of Walter Mondale, Jimmy Carter’s Vice President, when Mondale’s wife Joan worked with curators to make their home into an art exhibit. Stein felt that drawing inspiration from Joan Mondale’s project was particularly timely given the current administration’s attempts to defund the National Endowment for the Arts. He brought this idea across the country to the College, and the class used that catalog as inspiration for their own exhibition, adding another dimension by making the art in Pence’s house explicitly political. “The idea is to display the work in Mike Pence’s house, and this is not just to decorate his home but rather to make a type of tongue-in-cheek commentary on his life and his beliefs,” DeMuth said.

Although a large portion of class time was devoted to sorting through the 15,000 pieces of art that are in the vaults at the Williams College Museum of Art (WCMA), the class had no “typical day.” The students took trips to Stein’s temporary house in the woods, visited WMCA’s Rose Gallery, consulted with WCMA curators, walked around campus to observe public art and discussed the merits of different types of coffee with their professor in preparation for their final projects.

The course’s final project posed two fundamental questions Stein wanted his students to dissect and contextualize upon: What is an exhibition and who governs the terms of its engagement? Presenting their work over the past month to the WCMA staff was exciting, but the best part was “hearing from them afterward and having an actual dialogue about what we had put together,” according to Isabel Kuh ’23, another student in the class. The WCMA team drew on their years of experience in art curation and museum administration to point out new ideas and mediums to the students, who were eager to hear feedback.

The presentation itself allowed students to make personal connections with WCMA staff, but throughout the course, they also built close relationships with Stein and one another. Both DeMuth and Kuh say the course left them with a greater appreciation for curatorial work like Stein’s in general, and Kuh said that the class helped her realize that every choice a curator makes is both active and political. She added that, going forward, she will be more conscious of this when looking at professional art exhibits.

The students showed grace and humility about the work they had done, according to Stein, who said he was incredibly impressed with the quality of work they were able to put together. “I was really surprised and taken with the students’ capacity for collaboration” and their understanding of relationships between artworks was at “a remarkably high level,” he explained.

Beyond their ultimate finished product, Stein was thrilled that the students “asked such big and rhetorical questions about the nature of motherhood, gender, sexuality, politics, the natural world, the future of technology and so many other things,” adding that they showed a level of consciousness that was well beyond that of the College environment.

The class culminated with the students creating a pamphlet that exhibited the pieces they chose and displayed blurbs describing their thoughts. The project may have been an imaginary exercise, and Mike Pence’s house will not be adorned with their suggestions, but the skills these students learned will stay with them.