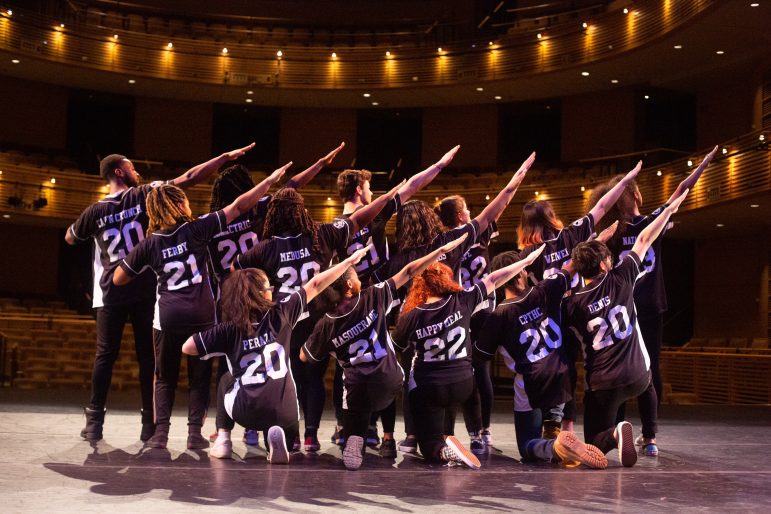 Sankofa was founded in 1996 by five black women, Dahra Jackson ’00, Maxine Lyle ’00, Mya Fisher ’00, Melina Evans ’00 and Samantha Reed ’00, in recognition of a deficit of black culture at the College. These women introduced step culture to the College’s campus and named themselves “Sankofa,” a word from the Akan tribe in Ghana that means to “reach back and get it.” They reached back for a rich artistic tradition rooted in South African history and black military drills.

Stepping is derived from gumboot dancing, which originated as a form of communication. In the late 1800s, South African gold miners were forced to work in dangerous conditions, stripped of their culture and forbidden from speaking to one another. Mines would frequently flood, and rather than improving the drainage system, employers distributed rubber gumboots.

These thick rubber boots became an apparatus of communication. Workers would discreetly share messages while performing their work drills by slapping their boots, stomping their feet and rattling their ankle chains.

Employers saw their movements as an art form and permitted workers to create dance troupes, intending for the dances to reflect positively upon the mining company in spite of its deplorable treatment of its workers. In lyrics sung in their native language, the workers would mock their bosses and speak out about unjust wages and working conditions.

In the early 20th century, black students established their presence on historically black colleges and universties (HBCUs) by creating fraternities and sororities. Those students appreciated the expression and community in the history of gumboot dancing, and stepping became a black American tradition. Traditional stepping used to be strictly acapella, and dances featured more calls and responses.

In addition, some dances are specific to the Divine 9, the nine historically African-American fraternities and sororities in the National Pan-Hellenic Council. Sankofa does not associate with any Greek organizations, per camps policy, so particular strolls (a type of step routine) could be inappropriate for the group to perform. With this institutional distinction, the team has the opportunity to be more creative with their choreography.

Sankofa is most different from black fraternities and sororities in terms of the structure and composition of the team, particularly with regard to  the group’s recent decision to de-gender its structure. In previous years, members were separated into Kofa men and Kofa La, but now have combined into a single team that choreographs and practices together. At the College, stepping has attracted people from a variety of ethnic and racial backgrounds.

Auditioning for Sankofa does not require previous experience with stepping, and members are encouraged to learn the technique and add to what they already know.

“It might not sit well [with teams from other schools] that we aren’t so traditional,” co-President Dominique Burgess ’20 said. At competitions, the diverse makeup of the team adds a uniqueness to their choreography, she said.

One of the most important traditions that Sankofa hopes to maintain is its autonomy as a student-led organization, Burgess said. In past years, the dance group was not affiliated with the College’s dance department, but the team now enjoys the resources the department has to provide, such as costumes, lighting and funding. Turning over creative control to the College is “not what the founders would want,” Eweka said. “Part of [the team’s] history is it being student run,”   Burgess added.

Sankofa is a notably diverse team, as well as a prominent platform for a historically black tradition in a predominantly white institution.

“It’s important that [Sankofa] remains a space for the people who created it,” said co-squad captain AJ Chabot Jr. ’21.

The leaders of Sankofa said that they strive to maintain the integrity of the tradition by educating members on its history.

“If you don’t know what step is, if something goes missing, you don’t notice it,” Eweka said. Traditions are kept alive by the passing down of “reunion steps,”  she added. This choreography connects the oldest members of Sankofa to the newest ones.

The leaders of Sankofa said they have high hopes for the future of the team, but their ultimate aspiration is, in the words of co-drill sergeant DJ Lee ’20, to keep “remembering Sankofa’s meaning and history by looking back at our roots and moving forward.”

“Kofa is a family,” Burgess said. “I hope that it remains diverse. This was made for black people, by black people.”