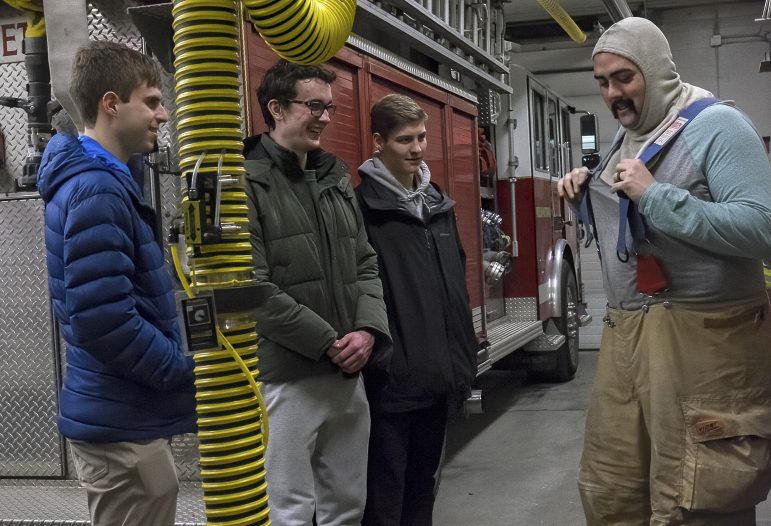 Jackson Anderson ’23, Grant Gattuso ’23 and Will Titus ’23 lie on the ground, waiting to be rescued. Artificial smoke billows around them, restricting their view of the dimly lit surroundings. Eventually, a group of firefighters breaks in to carry them out of the Williams Inn, marking the simulated training session a success.

Titus, Gattuso and Anderson have been training since January to prepare to join the Williamstown Fire Department as volunteer firefighters. They will join Logan Friedman ’20 and Ben Maron ’21, raising the number of student-firefighters to five.

Gattuso said that his experience in the simulation gave him a deeper appreciation for the dangers that firefighters face. “It was interesting to see how hard it is to navigate a building even if it’s just a straight line,” he said. “It’s very difficult to navigate with all the smoke when it’s dark.”

The three also observed professional firefighters, who demonstrated the techniques for breaking down doors and walls in the course of retrieving the three students.

Anderson said the first training he attended, however, was not particularly exciting. A salesperson was pitching a fire truck to the department, but the truck broke during the demonstration.

Anderson nevertheless said he found enjoyment in future trainings. “It was nice just hanging around and chatting with the other firefighters,” he said. Along with simulations, subsequent sessions included “truck checks,” where trainees took inventory of fire truck equipment.

According to Titus, even after becoming on-call firefighters, they will continue to train, expanding their skill sets and their designated responsibilities during emergencies.

Titus became interested in becoming a volunteer firefighter after encountering a Purple Key Fair booth hosted by student firefighters. He reached out to the department’s chief firefighter, Craig Pedercini, and, because of conflicts with his fall semester schedule, started training with Gattusso and Anderson during Winter Study.

Joining the department was a way for Titus and Anderson to fulfill goals each had formed during high school.

“I had this itch for national service that I wanted to scratch, and I realized that firefighting was along that same vein,” Anderson said. He added that this desire originated with recent political events.

“I grew up in a community with a large immigrant population, and I was always amazed at how much pride they had for both their home nations and for the U.S.,” he said. “It wasn’t until Trump got elected that I was able to feel proud about the U.S. To me, Trump represented a departure from what the U.S. should be, so I realized I could be proud of what I want the U.S. to look like.”

He added that it is a “great break from the academics of Williams” with a “really great group of guys at the fire station.”

Like Titus, Gattusso took notice of the firefighters at the Purple Key Fair during Previews.

His decision, however, was a little more spur of the moment.  “At the end of the fall, I was kind of looking for a little bit of excitement,” he said. He added that he also wanted to help others.

In addition to training with the department, the three are also pursuing certification for the use of self-contained breathing apparatuses (SCBA), devices that supply stored oxygen to the wearer, preventing them from inhaling smoke. Anderson and Gattuso said they hope to complete their SCBA certification before the summer so that they can perform more tasks during emergencies this year.

Titus said he is considering attending a “fire academy” during the summer. If he does, he would receive formal training that would contribute to certifications that are not required by the Williamston Fire Department to volunteer but are often necessary elsewhere.

Upon passing their physicals — including bloodwork, a spirometry test and an electron diagram evaluation — the three will become 24/7 on-call firefighters.

None of this deters Anderson.

“It’s something that I could possibly continue post-graduation,” he said.