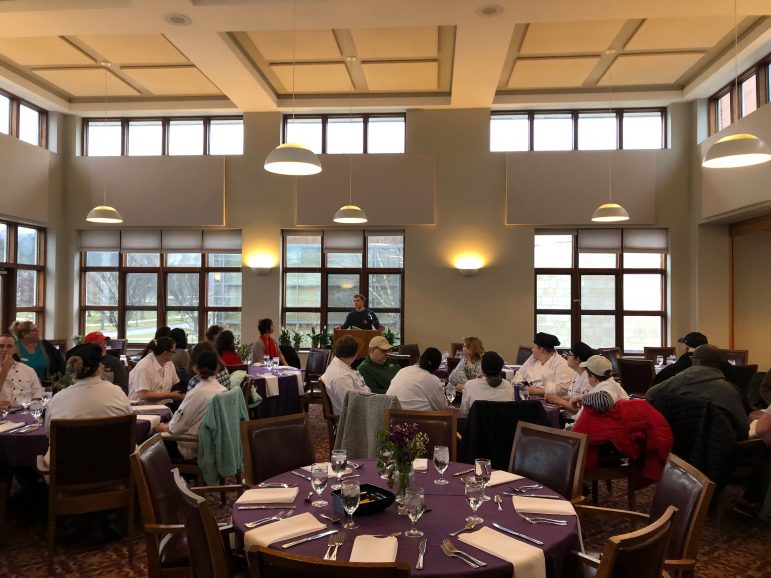 Lauren Heuer ’20 and Katherine Mahoney ’20 founded Williams Appreciates Staff (WAS), a new club on campus, because of what they saw to be a lack of appreciation and inclusion for staff at the College.

“Williams prides itself on having a strong community, but really when we say community, what we actually are including are the students,” Mahoney said. “I think the staff are often left out of that and [are] so often underappreciated.”

“I would say that the mission is two-fold,” Heuer said. “We strive to strengthen relationships between the student body and Williams staff members, as well as serve as an advocate for the visibility of the incredible dedication of our staff.”

Mahoney said she knew students who wanted to show appreciation for staff members, who are integral to the community, but some of the students did not even know staff by name.

Since the founding of the club, its members have held an ice cream social for staff, students and faculty; delivered candy grams; hosted weekly dinners at the Log for three students and a staff member; and most recently held the College’s first “flip-kitchen dinner” during the last week of Winter Study.

Heuer said that the idea for a “flip-kitchen dinner,” in which students cook a meal for staff, originated when she learned that the College’s semesterly staff-appreciation dinner is cooked by the staff in dining services.

This semester, students in WAS helped prepare the meal, along with a group of students who responded to a Daily Messages notification. They prepared a three-course menu, which was served buffet-style, and had a club member give a speech while everyone ate.

“The staff members that did get to sit and share a meal with students were really excited to do so,” Heuer said. “Right as people were finishing, Katie and I went up and gave out ‘years of service’ certificates, and we gave out a little plant to anyone who has been at Williams for thirty years [who] was present at the event.”

Mahoney said that she encountered a few obstacles while planning the event but that it was worth the trouble. “A staff member that had been working here for over thirty years said that he had never had students do that kind of appreciation, [and] that he was really thankful,” she said. “It was really positive feedback.”

Heuer noted that WAS is looking for more engagement from the student body.

“That’s one thing we are thinking a lot about right now,” Heuer said. “To increase our club’s visibility on campus, we have an Instagram page now. I think it has just under 300 followers, and we are pretty active posting Daily Messages [about] the weekly Log dinner.”

WAS also works to clarify for students who exactly is included in “staff,” such as dining services, library staff and campus safety and security.

“One thing students don’t specifically understand is that there is a difference between staff and faculty,” Mahoney said. “For the candy gram event, a lot of students preferred to send it to a professor. They don’t realize that professors are faculty; they aren’t actually included in staff.”

Looking ahead, WAS is hosting a new addition to Storytime where staff will be the honored speakers.

“On Feb. 16, we are going to have a ‘Super Storytime’ where a staff member is going to speak,” Mahoney said. “Our goal is for staff members to tell whatever story they wish students knew about them.”

Mahoney said she would like for students to join WAS, but for those who cannot, she advised that they show their appreciation through simple, everyday actions.

“I think a lot of students walk by staff members and don’t even acknowledge that they are there,” Mahoney said. “[Try] striking up a conversation [and] asking them how their day is, because I think that we sometimes forget that staff members have a whole life outside of their work at Williams.”

Heuer said she hopes that the club will continue to plan events and grow after she and Mahoney graduate.

“I love getting to actually interact with the staff members in those spaces and express our gratitude for everything they have done for us for the past three and a half years,” Heuer said. “The biggest hope is that students will be engaged in these events and get to have a similar experience and really get to know the staff members that we interact with in our daily routines and lives here.”