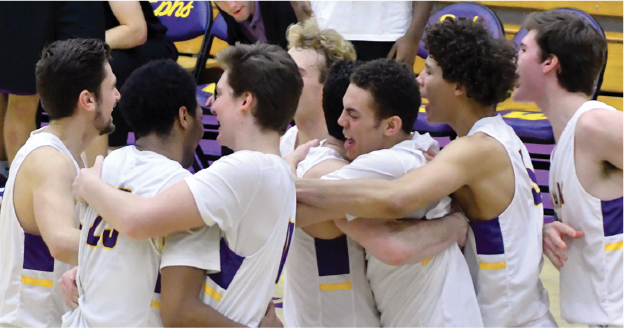 Nine different Ephs contributed in scoring to overcome a 14-point deficit against the Mammoths. (Photo courtesy of Sports Information.)

Nine different Ephs contributed in scoring to overcome a 14-point deficit against the Mammoths. (Photo courtesy of Sports Information.)

“The fun part about playing a rival is getting a good atmosphere,” Eph head coach Kevin App commented after the game. “Coming and playing in this environment is one of the things we talk about during recruitment. To come out on top in two last-second endings [against Amherst] was awesome.”

Amherst pulled out to a quick 12-2 lead after Grant Robinson and Michael Schretter scored nine combined points and continued to roll early as Garrett Day scored eight consecutive points to put the Mammoths up 23-9 with 12:05 to play in the half.

The defense on both sides stepped up over the closing minutes of the half, and the difference was eight as the Ephs headed down the court for the final possession. After some skilled dribbling to get in the paint, Cole Prowitt-Smith ’23 passed the ball to Matt Karpowicz ’20, who finished the lay-in just before the buzzer sounded. The teams would then head into the break with Amherst holding a 34-28 lead.

Jovan Jones ’22 began the scoring in the second half with a layup off a feed from Karpowicz. Prowitt-Smith cashed in on the next possession to cut the deficit to a single point.

Henry Feinberg ’20 gave the Ephs their first advantage of the game on a corner three-pointer with 13:23 to go, 40-39. The lead would then go back and forth on two pairs of free throws from Prowitt-Smith and Amherst’s Will Phelan.

Tim McCarthy hit a three-pointer for the Mammoths, but Jones and Karpowicz responded with six straight points to give the Ephs a 48-44 lead with 8:57 remaining. After Amherst tied the game at 48, Karpowicz hit a one-handed jumper for another Eph lead. Prowitt-Smith then used strong dribbling to create a lane for himself and finish a scoop layup to extend the lead.

Day found the hoop from long range with 4:48 left to trim the Ephs’ lead to one, and his teammate Robinson found the hoop for a reverse layup to return the edge to the Mammoths. Mickey Babek ’20 ended a three-minute scoring hiatus for the Ephs with a 3.

The Ephs took a full timeout with the score knotted at 56 and 2:02 to go. Prowitt-Smith found the glass to put the Ephs up a basket, and Jones did the same on the following offensive possession. Day went down to the other end, drew a foul, and made both his attempts from the charity stripe to make it 60-58. App then called a full timeout up two with 30 seconds to play.

Out of the timeout, Prowitt-Smith found himself tightly covered by three Amherst defenders and needing to get the ball across half-court. He launched a pass to the wide-open Jones, who calmly sunk a layup, increasing the Eph advantage to four.

Robinson drove to the hoop to make it 62-60, and Amherst immediately called timeout with six seconds remaining. Amherst fouled in under a second to put Stoddard on the line. He missed the free throw, but the Mammoths were unable to get off a last-second three-pointer.

With the win, the Ephs clinched a shared victory in the Little Three.

Jones led the Eph offensively and defensively Wednesday evening, putting up 17 points on 8-14 shooting while adding five boards. “Jovan is a great kid, and watching his hard work and commitment pay off has been enjoyable,” App said.

Prowitt-Smith was next in line with 14 points for the Ephs.

The men traveled to Middlebury on Saturday, where they were bested 84-66. The Panthers pulled away with a convincing victory after a dominant second-half performance in which they shot 8-14 from downtown.

The men will next play on Friday, on the road against Connecticut College at 7 p.m.