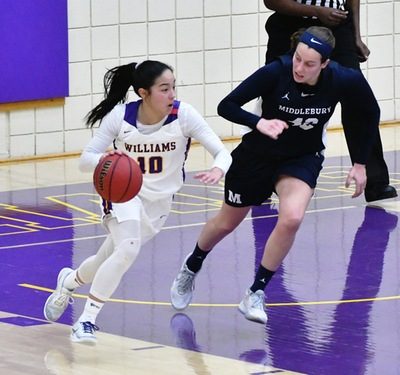 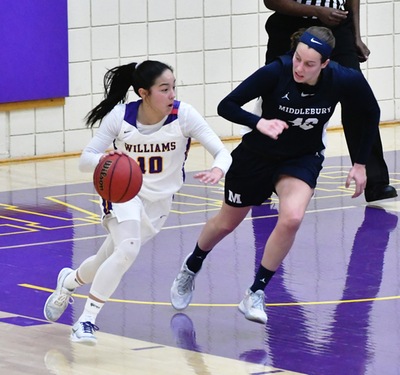 In addition to their  standard purple and gold uniforms, women’s basketball sported red athletic tape across their jerseys during their Saturday game against Middlebury. In the crowd, students and hip-hop dance team Nothing but Cuties (NBC) were also decked out in red attire. The game, which was in partnership with NBC, Student Athlete Advisory Committee (SAAC), Rape and Sexual Assault Network (RASAN) and Masculinity, Accountability, Sexual violence, and Consent (MASC), was organized to spread awareness about the College’s Red Zone.

The Red Zone refers to a period of time when instances of sexual assault are higher than at any other point during the academic year. While this generally applies to the time frame of September to November at most colleges across the U.S., according to the Bureau of Justice, the College’s Red Zone also includes Winter Study, as rates of sexual assault are comparable to rates during the first months of the academic year.

“The concept of the Red Zone is a very popular thing nationally, and what it’s talking about is about the vulnerability that happens when people are new to communities,” said Meg Bossong ’05, director of sexual assault prevention and response.

While public data regarding sexual assault at the College remains limited, Bossong said that a combination of quantitative and qualitative data provides evidence to pinpoint Winter Study as a Red Zone for the College.

“It’s a time when the entry cohesion is breaking up a little bit,” she said. “People aren’t going to parties in large groups like they used to. People’s social circles have expanded a little bit. They’ve joined new groups. Maybe Winter Study is a time they are experimenting with substance use.”

Michael Nettesheim ’20, a student leader of MASC, offered a similar rationale as to why Winter Study might be a Red Zone. “My conjecture would be that [during Winter Study], there could be more time, people are going out more, there are more parties on more nights, more drinking,” he said. “All of those things come together for more opportunities and people and spaces that aren’t super safe.”

Over Winter Study, organizers executed an event with the women’s basketball team about the Red Zone, believing that sports teams have a venue to raise awareness about matters important to the College among well-attended audiences during January.

“I think we’ve been given a platform sort of by nature of playing the sport,” Eph co-captain Katie Brule ’20 said. “I think if you can use that [platform] to do something good like this, where you’re talking about an issue you have on campus — an issue that is perhaps larger than Williams  —  I think you should take advantage of that and maybe other groups get involved with it too.”

NBC, SAAC, RASAN and MASC’s collaboration with women’s basketball on this initiative centers on conversations about how instances of sexual assault and violence relate to sports, masculinity, drinking and partying on the College’s campus.

“I think, at least for Williams, sports sort of function like a fraternity, where you’re living with the same people on the same team and you’re caught up in this culture,” Brule said.

Nettesheim concurred, referencing MASC’s conversations with all-male student organizations about the ways in which “team culture shapes the landscape of school culture around sexual assault.”

While Nettesheim emphasized a lack of direct association between athletics and sexual assault, he argued more indirect connections may exist. “I see some connections between the form of competitive masculinity that often occurs in male team spaces as linked to sexual assault, but not in a directly causal way,” he said.

At the game, SAAC, RASAN and MASC distributed informational pamphlets to attendents regarding campus resources relating to sexual assault and violence. As the Ephs trailed 30-29 going into the half, fans were treated to a special halftime performance by NBC. Before taking the floor, the group announced that their performance was dedicated to spreading awareness of sexual assault and violence.

Much like other colleges such as Wesleyan, which has launched a “Project No Red Zone” initiative, the College has already taken data-driven interventions to minimize risks and increase protection in party spaces across campus. This includes installing additional lighting at houses on Hoxsey Street and developing awareness campaigns led by RASAN, such as “It’s Halloween. Don’t be Creepy,” along with SAAC and the volleyball team. The College has also moved mid-year entry talks about sexual safety with first-year students up to the beginning of Winter Study instead of during the month’s latter half.

“We are trying to design interventions into party spaces that remind people that you are still part of this community, this is not an environment of anonymity and people are paying attention to what you’re doing,” Bossong said. “A way for people to be in those spaces that are a little more comfortable and not so alcohol-fueled. That means offering attractive nonalcoholic beverages and offering attractive snack food in those spaces [and] reminding people that it’s not a place to go to just engage in sexual interactions.”

Although the College has taken targeted measures to address the Red Zone, Bossong cautioned against treating the Red Zone as an isolated period of time that those on campus should simply “get through.” Instead, she maintained, the Red Zone is a “time of vulnerability” that should be approached with a commitment to build and reinforce community values of accountability and respect over the course of four years.

One of the best places to establish such values, Bossong said, is within sports teams.

“After attending Williams itself, sports is the biggest affinity group that exists on campus,” Bossong said. “About 40 percent are involved in a varsity athletic team. People often feel an obligation to teammates. People will feel accountable and answerable to their team. You don’t hear people say, ‘Oh, I really owe this to my fellow chemistry majors.’”