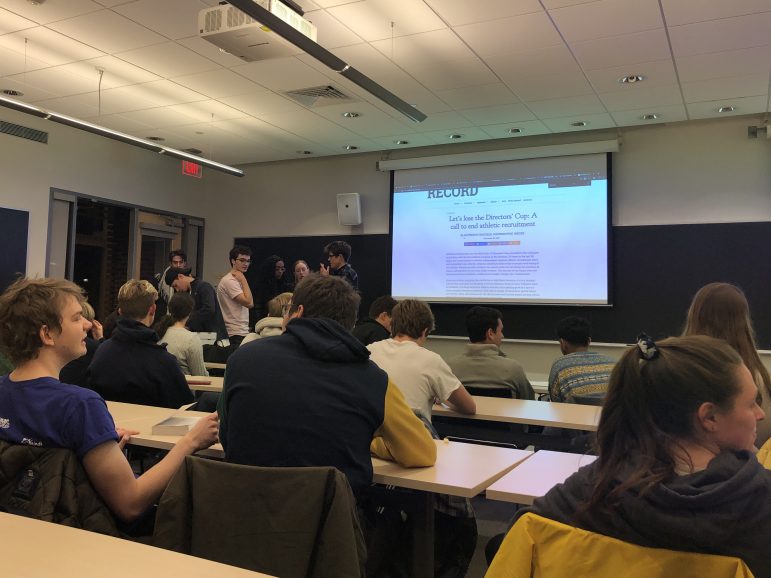 Students gathered in Schapiro for the Forum event on athletic recruitment, moderated by representatives from ThinkerAnalytix. Annie Lu/THE WILLIAMS RECORD

The Williams Forum hosted a conversation on Friday regarding athletic recruitment at the College. The Forum, a registered student organization, facilitates discussions on political issues in an effort to expand discourse that looks beyond the College.

In recent months, a number of op-eds published in the Record regarding athletic recruitment have garnered controversy across campus. The catalyst, an op-ed by Katherine Hatfield ’22 entitled “Let’s lose the Directors’ Cup: A call to end athletic recruitment,” argued against recruitment on the basis that it compromises the diversity and academic achievement of the College. In response, other students defended the presence of recruited athletes or pointed to deeper issues at play in the demographics of the College.

The Forum event was moderated by representatives from a Cambridge, Mass.-based educational non-profit, ThinkerAnalytix, which works in partnership with classroom teachers and Harvard’s department of philosophy to teach students logic and reasoning. Anne Sanderson ’84, Executive Director of ThinkerAnalytix, introduced the organization, while content developer and instructor Nate Otey led the discussion.

Approximately 55 students attended the event in Schapiro 129, nearly half of whom identified themselves as recruited athletes. The event consisted of questions and observations from Otey, followed by voluntary input from various voices in the audience. Hatfield was present and responded to questions from other attendees.

During the discussion, Otey listed factors on the blackboard that participants deemed relevant to the admissions process. He emphasized  various personal identifiers that students perceived as factors that the admissions office favors.

Following a briefing and discussion on the initial op-ed and “#whyd3,” the ThinkerAnalytix representatives passed out diagrams for students to work on in small groups. The diagrams, designed by recent ThinkerAnalytix intern Blain Solomon ’22,  consisted of a blank argument map and smaller slips of paper containing the corresponding claims and justifications. Students were asked to identify the main claim and place it at the top, then fit the remaining slips into the correct spaces so that each statement justified the one above it. The resulting maps, one for Hatfield’s op-ed and one for Avant’s response, outlined the logical structure of their arguments. The remainder of the conversation centered on the potential economic and cultural implications of athletic recruitment.

Forum co-Presidents Davey Morse ’22 and Emma Neil ’22 took over the club’s leadership earlier this school year and are working toward providing a space on campus for students who wish to have productive discourse about topical issues. While the Forum formerly took on the role of a traditional political club — inviting speakers and hosting debates — Morse and Neil said they hope to stimulate engaging conversations and address topics that have greater relevance to the immediate College community.

“We’re trying to move away from just solely national political things to things that are relevant to kids here,” Morse said. “If national politics is what people are talking about, then we’ll have our meetings about that. If it’s about campus issues, we think that’s a necessary and important lesson, too.”

Previous topics have included the drinking age and projections for the seventh Democratic debate, among others.

Morse said he was pleasantly surprised by the high turnout, given that typical Forum events attract 30 students at most, and attributed its popularity to the pertinence of the subject. “We knew a lot of people were reading those op-eds and talking about it, but it seemed like it was happening within friend groups more than across them, which is sort of where we tried to step in,” he said.