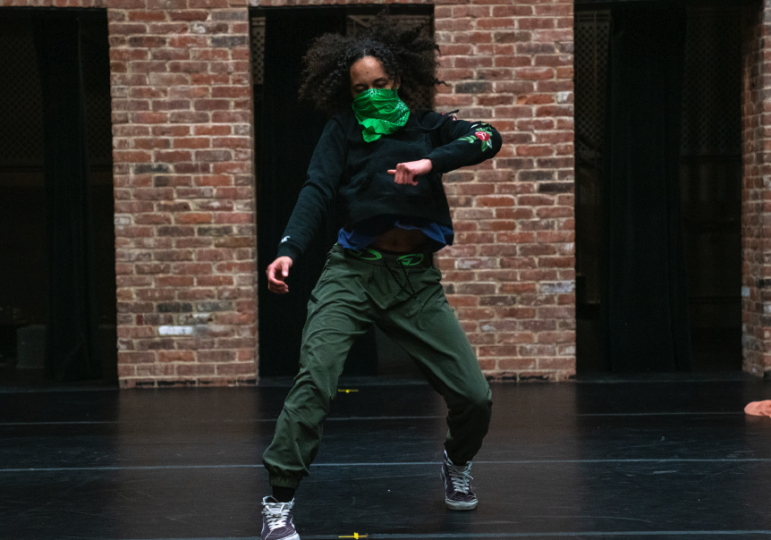 Eddie Wolfson (EW): How have you been involved with the Dance Department over your four years at the College?

Erin Meadors (EM): For the first few years, I wasn’t involved at all. Then, junior year, I took Dance 100 and Ballet for PE, and I really liked the people in the department. I’ve always danced on my own, not in classes or anything but just for fun. It was a nice way to find some new ways to explore my fun side. Then, in my junior spring, I took a choreography tutorial with the department. That was a way for me to grow my skills and actually perform because I had never performed dance before. It was a lot of fun. I could do whatever I wanted creatively and collaborate with someone making music — a way to jump into the field.

EW: How did you come up with the idea for this independent study? What was your process?

EM: Well, during the choreography tutorial, I really enjoyed being able to collaborate with the musician and design the dance. But there were all these other variables — we didn’t have lighting, we didn’t have props or stuff like that. So, I wanted to create an entire thing where I got to do lights, set, costume design, all that stuff. I really enjoy dancing, but I like designing artistically. It took a while for me to develop an idea I felt was worth spending an entire semester on.

EW: What are your main sources of inspiration?

EM: It’s my family history. My dad is always telling me little bits of things, not from his day, but things my grandmother told him or someone told him once, like the Chitlin circuit. [The circuit] is all the venues across the South and into the Southwest and a bit into the North where black artists, comedians, jazz performers, actors, musicians could stay since they couldn’t stay at normal hotels or play at normal venues. The Chitlin circuit wasn’t actually a guide to go from this place to the next. It was more like in every town there was a neighborhood, a few black venues where you could perform. There was a house where I’m from, in Albuquerque, where some artists could stay. It was my grandmother’s house so when her grandparents lived there they would host artists and others who came through. It was like this little rumor that my dad told me about that I decided to dig into.

The project ended up being about family history with the Chitlin circuit. That was the inspiration for having live music and jazz, and then also just the rest of my family history. How did we end up in New Mexico? What is the rest of the history of African Americans in New Mexico because it’s a tiny population? Historically, it’s always been there but has always been the smallest minority in a majority-minority state because there’s a big Native American and Hispanic population there. It’s been really interesting studying a minority in a minority in this state that’s kind of forgotten about and thrown off to the side a bit … There’s not actually that much information on it, which is sad to see. There are black people saying that their history in New Mexico goes back 500 years, but the information on it is so small. Or, the people writing about it were saying negative things about the population there or it was out of context. So, it was an interesting process to see what was even out there about this population.

EW: How have you balanced the production aspects of your role as creator with the performative ones?

EM: It’s been pretty crazy because it’s a ‘one woman show,’ so I’m doing everything. I’m directing, choreographing, lighting myself, designing myself, figuring out what songs to play. It’s been a really crazy process, so having my advisor telling me what she sees from what I’m doing, and then having friends come in and look at lights, has been really helpful. It’s been a lot of me just making decisions, seeing what happens and making little tweaks. If you make a big decision and it isn’t right, you can tweak it from there, but if you never make a decision then you don’t have anything to work with. So, it’s been a lot of a “Let’s go with it and see what happens” kind of thing.

EW: What are the main things you want our readers to take away?

EM: Since it is a dance performance, I’m not trying to give a history presentation the whole time. I did all the research so that I can just give snippets of it. With this and the performance, I just want to give the idea that there are some stories you shouldn’t take for granted or things you didn’t realize were there. I feel like a lot of people don’t know what the Chitlin circuit is. Part of the family history I realized is that some of my family walked the Trail of Tears, and I know some people don’t know what that is either. So even though I’m not going to go into huge detail explaining what these things are, I want to give little snippets of information so they know what I’m talking about. It hopefully sparks their interest to go and read some more about it somewhere else or even just to appreciate that these stories exist. You might not even think that there would be a whole history book on African Americans in New Mexico. For some people it just never crosses their mind… Maybe in your own lives there’s a little story you’re forgetting about or people who get pushed to the side, who never get heard. It’s not really a call to action, but just to give a little information to get the ball rolling is important.

EW: How are you going to incorporate dance into your life post-college?

EM: I really like to dance and definitely want to continue doing it. I’m not, despite this huge production, huge on performing. I like the design aspect, and I really like creating new material, and I like to dance. I want to be in the field in some way, learning about dance, working with dancers, to be able to continue just in production or management or something like that. So, I definitely want to continue being involved. I’ll be doing lighting design for some theater projects so it’s kind of similar. I definitely want to continue taking technique classes – those are a lot of fun. But with performance, when it has a strong message and it’s something I’ve worked on for so long, it means a lot but if I could get someone else to go on stage, that would be a lot of fun, too.